Okay, everyone find Aden on a map

Just in time for the Hajj!

"It is all over, the [Southern Transitional Council] forces are in control of all the military camps," an official in Mr Hadi's government told Reuters news agency. -- BBC


The UAE has trained 90,000 Yemeni agents to separate the Southern parts of Yemen from the country," the Arabic-language al-Ray al-Youm wrote on Saturday. 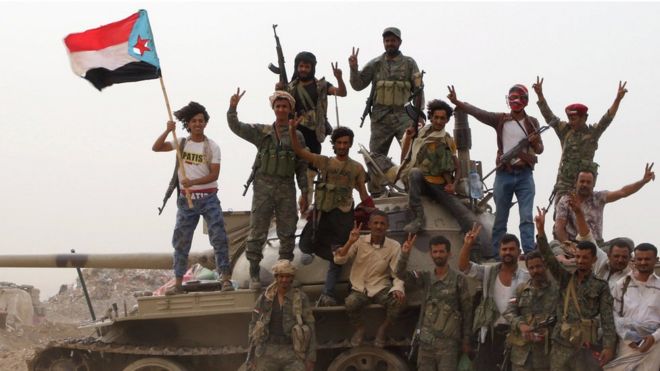 Yemeni separatists have taken effective control of the port city of Aden after days of fighting with troops loyal to the internationally-backed government.

Forces aligned with the UAE-backed Southern Transitional Council (STC) - which wants an independent south - said they had seized control of military camps and the presidential palace.

The government said it was a "coup".

The action has fractured the Saudi-led coalition against Houthi rebels that both sides have fought in.

The coalition called for an immediate ceasefire in the city and said it would "use military force against anyone who violates it", Saudi Arabia's state news agency SPA reported.


The separatists agreed to the ceasefire, which was due to come into effect early on Sunday.

The southern port city of Aden has been the temporary base of President Abdrabbuh Mansour Hadi's government. The president himself is based in the Saudi capital Riyadh.

An official with the separatist Security Belt militia told AFP that it seized the presidential palace on Saturday without a fight.

"Two hundred soldiers from the Presidential Guard were given safe passage out of the palace," the official said.

An eyewitness confirmed to the news agency that the complex had been handed over.

"It is all over, the [Southern Transitional Council] forces are in control of all the military camps," an official in Mr Hadi's government told Reuters news agency.

The foreign ministry described the takeover as "a coup against institutions of the internationally recognised government".

The UAE, which has armed and trained thousands of southern separatist fighters, earlier called for calm and a renewed focus on battling the Iran-backed Houthis, who took over the capital Sanaa in 2014.

Doctors Without Borders on Saturday described Aden as "a battlefield" and said its hospital there was "stretched to the limit". It said it treated 119 patients in less than 24 hours amid the fighting.

The civil war in Yemen has devastated the country, killing thousands of civilians and causing shortages of food and medical care that have affected millions.

Now for the FARS report. Be sure to read down to the very last sentence:

TEHRAN (FNA)- A leading Arab newspaper underlined that the recent developments in Yemen, especially Aden, show that Saudi Arabia and the UAE are stepping towards a proxy war.

"The UAE's withdrawal from Yemen was not coordinated with Saudi Arabia. The current war in Yemen and vice president of the so-called Southern Transitional Council Sheikh Hani Ben Brik's order to put his forces on alert to expel the loyalists to fugitive Yemeni President Mansour Hadi from the city indicate that relations between Abu Dhabi and Riyadh are rapidly moving towards hostility and a proxy war. The UAE has trained 90,000 Yemeni agents to separate the Southern parts of Yemen from the country," the Arabic-language al-Ray al-Youm wrote on Saturday.

The paper stressed that the Saudi government now faces limited options as the war in Yemen has entered difficult stages, noting that Riyadh's position will weaken in any talks with Ansarallah if the war prolongs more.

"The Arab coalition (against Yemen) is also collapsing," it added.

Amid a widening rift in the Riyadh-led military coalition waging war on Yemen, new reports are recounting that the port city of Aden, which bases the ex-government of the war-ravaged country, has been rocked by deadly clashes between the UAE-backed separatists and Saudi-backed militants.

According to reports, the infighting broke out Wednesday after the Southern separatists attended a funeral for dozens of fellows, including a senior militant commander, who were killed in last week’s retaliatory missile attack by Yemen’s Ansarullah movement on a military parade.

Both the UAE-backed separatists and the militants loyal to the former Saudi-allied Yemeni government serve the Riyadh-led coalition, which has been engaged, since 2015, in a bloody military campaign against Yemen aimed at reinstating ex-president Abd Rabbuh Mansur Hadi, who resigned in 2014 and later fled to the Saudi capital.

During the funeral, the mourners chanted slogans against the self-proclaimed Hadi administration and exchanged gunfire with the guards at the presidential palace in Aden, where Hadi was supposed to be based but which remains largely empty as the ex-president lives in Riyadh.

The two sides pursue different agendas for Yemen’s future; the separatists want independence from Yemen, while the other militants seek to bring Hadi back to power, but the two camps have joined forces in the Saudi-led battle against Yemen’s Houthi movement, which has been both running state affairs and defending the country against the aggression.

Brik called for a march on Hadi’s palace to oust his administration.

“The people of the south are all on the street. This is a movement by the people that cannot be stopped, except with the government’s downfall,” noted mourner Abdelhakim Tabaza.

Presidential guard Brigadier General Sanad al-Rahwa told al-Masdar Online news website that his forces had clashed with armed groups, who were trying to storm the presidential palace and the central bank.

Ties between the pro-Hadi side and the UAE-sponsored militants have grown increasingly tense over a number of issues, including what the Yemenis view as Abu Dhabi’s intention to occupy Yemen’s strategic Socotra Island and gain dominance over the major waterways in the region.

[END FARS REPORT]
[squinting at a map] Now where the heck is Aden? 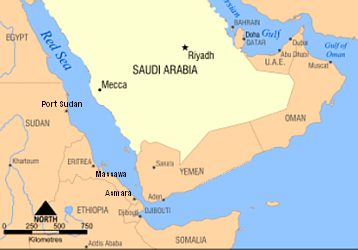 That's supposed to be a map showing Aden. I don't see Aden. Do you see Aden?  [squinting] Oh yes, I see it. Here's a photo of the city, From Wikipedia:

Look at that harbor! From Wikipedia's article:


Adan Yemeni: ... is a port city and the temporary capital of Yemen, located by the eastern approach to the Red Sea (the Gulf of Aden), some 170 km (110 mi) east of Bab-el-Mandeb. Its population is approximately 800,000 people. Aden's natural harbour lies in the crater of a dormant volcano, which now forms a peninsula joined to the mainland by a low isthmus.

Aden encloses the eastern side of a vast, natural harbour that comprises the modern port. This city is rather large, yet has no natural resources available in it. However, Aden does have reservoirs, the Aden Tanks. These reservoirs accumulate rain water for the sole purpose of drinking for the city's citizens. The city is prosperous with rich merchants living here and Indian vessels arriving for trade. ... The volcanic peninsula of Little Aden forms a near-mirror image, enclosing the harbour and port on the western side. Little Aden became the site of the oil refinery and tanker port. Both were established and operated by British Petroleum until they were turned over to Yemeni government ownership and control in 1978.[...]