Tourists get out. Europeans have had it with you, and even the weather is anti-tourist 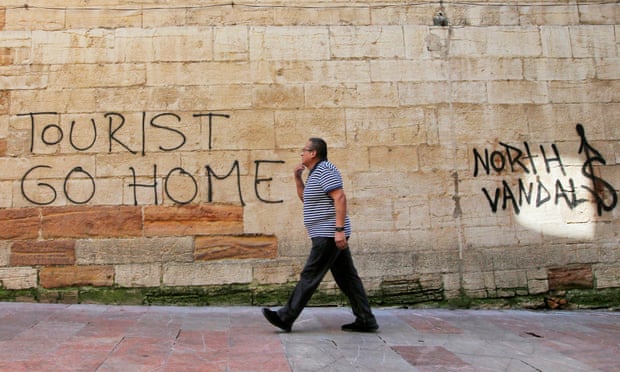 “Though tourist numbers have increased, I am not sure they have increased enough in five years to cause this much agitation,” he says. “What has really changed? A lot is that politics isn’t out for the ordinary person any more. Until that is addressed I don’t think we’ll see this protest movement subside."

But actually the numbers have increased, a lot. As to how this has impacted the groundwater situation in the European Mediterranean countries, the Guardian report, below doesn't say.  First, however, the  weather also gets a vote:


The 'Lucifer' heatwave that is sweeping southern Europe has forced the closure of summer skiing on an Italian glacier for the first time in 90 years. Skiing is normally possible throughout the summer months on the Stelvio Pass glacier, which lies at 3,450 metres, or 11,319ft. But the torrid heat of the past couple of weeks has turned the pistes into wet slush.
[...]

The Guardian, August 10, by Will Coldwell:

First Venice and Barcelona: now anti-tourism marches spread across Europe: Demos in San Sebastián and crackdowns in Rome and Dubrovnik as locals vent frustration at city-breakers and cruise ships

With the continent sweltering under a heatwave nicknamed Lucifer, tempers have been boiling over, too, as a wave of anti-tourism protests take place in some of Europe’s most popular destinations.

The focal point for much of this has been Spain, which had a record 75.6 million tourists last year, including 17.8 million from the UK. In Barcelona, where tensions have been rising for years over the unchecked surge in visitors and impact of sites such as Airbnb on the local housing market,

There have also been protests in Mallorca and San Sebastián, where an anti-tourism march is planned for 17 August, to coincide with Semana Grande – a major festival of Basque culture.

Other demonstrations have taken place across southern Europe. Last month in Venice – which sees more than 20 million visitors a year and has just 55,000 residents – 2,000 locals marched through the city, voicing anger at rising rents and the impact of huge cruise ships and the pollution they cause to the city’s delicate environment.
Speaking to the Guardian, UNWTO secretary general Taleb Rifai said the rise in anti-tourist sentiment is “a very serious situation that needs to be addressed in a serious way”. If managed correctly, he added, tourism can be the “best ally” to conservation, preservation and the community.
[...]
In Dubrovnik [Croatia, in E. Europe], another city where cruise ships unload thousands of visitors at a time, the mayor has introduced cameras to monitor the number of visitors in its Unesco-listed old town, so that the flow of people entering can be slowed – or even stopped – once a certain number is reached. Meanwhile, the mayor of popular Croatian party island Hvar has pledged to put an end to debauchery by mostly British tourists by slapping them with huge fines.

For Duncan McCann, researcher at the New Economics Foundation, there are a number of factors underlying the recent tensions, including the rise of Airbnb, an increasing number of tourists making short city breaks, and the burden of cruise ships. Both city breakers and cruise ship passengers are far more likely to remain in a city centre rather than explore further afield.
The perceived threat of terrorism in north Africa has also led to an increase in tourists holidaying in the Mediterranean over the past two years.
“These shifts are really putting pressure on these locations, increasing the numbers and reducing the spread of the tourists,” says McCann. “Once you factor in the layout of a lot of these continental cities – old, and with a network of smaller streets – people start to get the sense that they’re being taken over.”
He adds that this plays into the wider politics of the continent, with economies not seen to be working for people, and politics not addressing the problems.
“Though tourist numbers have increased, I am not sure they have increased enough in five years to cause this much agitation,” he says. “What has really changed? A lot is that politics isn’t out for the ordinary person any more. Until that is addressed I don’t think we’ll see this protest movement subside.”
[END REPORT]
********