What in the hell are U.S. troops doing in Niger?

[squinting at a map of Africa]  Where is Niger? 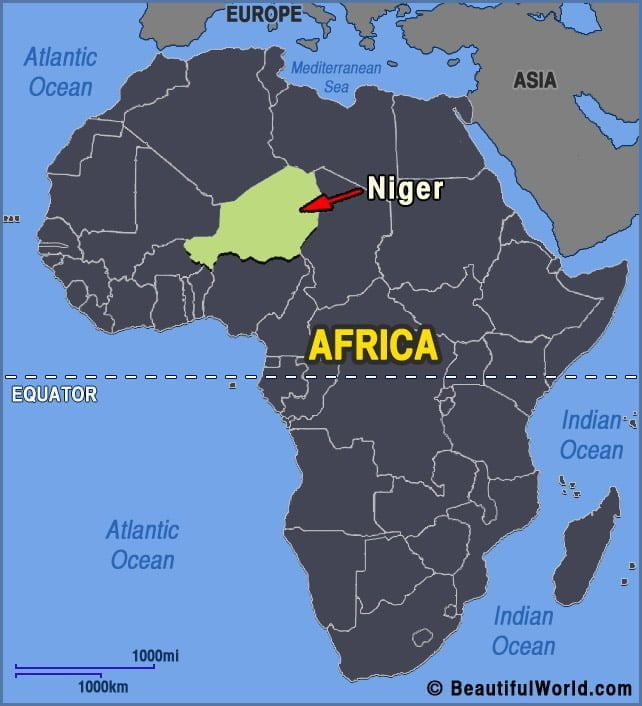 Niger or the Niger ...officially the Republic of the Niger, is a landlocked country in Western Africa, named after the Niger River.

Yes, Wikipedia, I can see it's landlocked; I want to know where it is in relation to other countries in Africa:

Niger is bordered by Libya to the northeast, Chad to the east, Nigeria and Benin to the south, Burkina Faso and Mali to the west, and Algeria to the northwest.

Niger covers a land area of almost 1,270,000 km2, making it the largest country in West Africa, with over 80 percent of its land area covered by the Sahara Desert.

The country's predominantly Islamic population of about 21 million is mostly clustered in the far south and west of the country. The capital city is Niamey, located in the far-southwest corner of Niger.

Niger is a developing country, and is consistently one of the lowest-ranked in the United Nations' Human Development Index (HDI) ...

Alright; let's try to learn what a land-locked basket case that's mostly desert means to the United States of America, and [throwing a couple darts blindfolded] to Saudi Arabia and France.


Drag your attention away from the Middle East for a moment. While policymakers have been focused on Saudi Arabia's oil market machinations, what really matters right now is happening 3,000 miles away in the Niger River delta.

The country that was, until recently, Africa's biggest crude producer is slipping back into chaos. A wave of attacks and accidents have hit infrastructure, taking Nigeria's output down to 20-year lows.

But I want to know about Niger. All right, Pundita, settle down:

The Niger Delta Avengers have certainly been busy, forcing Shell's Forcados terminal to shut in about 250,000 barrels of daily exports; and breaching an offshore Chevron facility in the 160,000 barrels per day Escravos system. In April, ENI had to declare force majeure -- letting it stop shipments without breaching contracts -- on exports of its Brass River grade after a pipeline fire. [...]

Thank you Bloomberg but that doesn't answer my questions. Back to Wikipedia:


Much of the non-desert portions of the country are threatened by periodic drought and desertification. The economy is concentrated around subsistence and some export agriculture clustered in the more fertile south, and the export of raw materials, especially uranium ore.

Uranium ore. Okay, uranium is why the trapped American forces could call in fast air support from the French military.


The Niger mining industry is the main source of national exports, of which uranium is the largest export. Niger has been a uranium exporter since the 1960s and has had substantial export earnings and rapid economic growth during the 1960s and 1970s.

The persistent uranium price slump has brought lower revenues for Niger's uranium sector, although it still provides 72% of national export proceeds. When the uranium-led boom ended in the early 1980s the economy stagnated, and new investment since then has been limited.

As of 2007, many licences have been sold to other companies from countries such as India, China, Canada and Australia in order to exploit new deposits.

In 2013, the government of Niger sought to increase its uranium revenue by subjecting the two mining companies to a 2006 Mining Law. The government argued that the application of the new law will balance an otherwise unfavorable partnership between the government and Areva.

The company resisted the application of the new law that it feared would jeopardize the financial health of the companies, citing declining market uranium prices and unfavorable market conditions.

In 2014, following nearly a year long negotiation with the government of Niger, Areva agreed to the application of 2006 Mining Law of Niger, which would increase the government's uranium revenues from 5 to 12%.

Now what are the Saudis up to in Niger? They must be up to something there if it's a largely Muslim country.


Saudi Arabia and Niger signed on Sunday three agreements and a Memorandum of Understanding during the visit of President Mahamadou Issoufou.

The agreements included a security cooperation pact, a draft accord for construction and equipping primary schools in all regions of Niger, a draft pact for financing the construction of Kandadji Dam.

Now let's look up the Kandadji Dam. [taptaptap tap]  Hah! I knew it was a World Bank project! I knew it!  So much for the baloney that the Bank doesn't want to keep making loans for dams. The only places that applies is in countries where the Bank has already built so many dams there's hardly room left for building bridges to nowhere and international airports that only see real use during Ramadan and the Hajj and all other times by World Bank and other development bank staff and contractors.

In 2012, the World Bank approved a $203 million loan for Niger’s Kandadji Dam. This paved the way for a dozen-odd financiers to complete the $785 million financing package for the project, to be located on the Niger River. The future of Kandadji is in doubt, however, given problems with the resettlement process and construction delays following a dispute with the company hired to develop the project.

And Kandadji isn’t just any project; Kandadji was presented as a way to produce 130 MW of much-needed power to the capital, Niamey, and to harness the river’s flow to expand Niger’s irrigation potential. The World Bank’s Vice President for Africa, Makhtar Diop, described the project as “a transformational development project that will deliver significantly more opportunity to communities, more food, water, and electricity, and less poverty in the poorest region of Africa."

The World Bank also took pains to plan for the human cost of the dam’s construction. Conscious of the troubled legacy of the impacts such projects have wrought on resettled communities, the World Bank took on the admittedly herculean task of overseeing the process to resettle over 38,000 people located around the river’s fertile banks.

The compensation package would include resettling these traditionally flood recession farmers into new houses, providing access to irrigation, and sharing revenues for local development projects.

The process began in 2012 to resettle a first wave of nearly 5500 people. Many were initially optimistic about the project’s promised benefits, but their enthusiasm was short-lived.

While some have seen their living conditions improve, irrigation plans for resettled communities were poorly conceived – unsurprising, as the World Bank itself has noted that irrigation schemes of this sort rarely work in Africa.

All right. So the Saudis plan to blanket Niger with madrassas that are guaranteed to crank out many crazy young men. And the Saudis have directed their maid, that being the U.S. military, to provide more security to Niger so the crazy young men don't bomb a dam under construction now that Saudi money is helping finance it. Something like that.

As to the French interests:


Niger exports enough uranium to France to generate 50 per cent of the latter’s electricity supply, writes Khadija Sharife. But ordinary Nigeriens reap little benefit from France’s control of their country’s uranium resources, with over three-fifths of the population living below the poverty line and reports of radioactive contamination of water, air and soil by multinational mining operations.

It is known as the ‘uranium highway,’ a network of major roads connecting the Niger’s primary urban mining centres such as Arlit, Agadez and Niamey
Developed in the 1970s and 1980s, the north-south highway acts as the primary vein facilitating carriage of liquidated uranium resources.

The network itself forms part of the Trans-Sahara route, an ancient system used since time immemorial by inhabitants of the ‘Tinariwen’ – or Desert of Many, as the Sahara was known to its native sons and daughters, including the Hausa and Tuareg.

Despite the nip and tuck of territories by former colonialists, conveniently stitching together concessional nation-states ... the Trans-Sahara route continued to survive by innovatively moving around border closures. Central to this route is the landlocked Niger, the bridge between North and sub-Saharan Africa, a land bordered by seven countries.

The above is from a report published in 2010 by the pan-African Pambazuka News but surely the basic situation described in the report has remained the same. And, as the author notes, the French government was defending its uranium interests against U.S. and Chinese competition in Niger. The competition is also probably unchanged since 2010, unless there are even more players now.

So while Niger is a basket-case economically, it's a strategically important country. Niger's landlocked location makes it a key transport hub for shipping uranium product overland, which of course would be a big attraction for smugglers, insurgents and terrorist groups. This would mean endless warfare between non-government groups trying for control of the land routes, and when they weren't fighting each other they'd be fighting the Niger government.

Okay; all the above pretty much explains why U.S. Special Forces have been mucking around in Niger.

[dusting her hands] Next.