Definition: Double Cross:  (verb) to deceive or betray, especially a person with whom one is supposedly cooperating.

Thursday 13 August 2014 / Hour 2, Block A:
Guest: Jonathan Schanzer, former terrorism finance analyst at Treasury; in re: Turkey and the Kurds.


Neo-Ottomanists. the heirs of the Ottoman empire. The minorities have been the social mortar for a century: Yazidis, Kurds, Christians, Jews, Mandaeans, Alawi.

Suddenly last month a suicide bombing in Eastern Turkey by a Kurd perhaps associated with ISIS. Erdogan finally decided to join the U.S., opened Incirlik [pron: injure-lik] airfield in Turkey for U.S. airstrikes. But ... as it turns out, Turkey is not fighting ISIS, is killing Kurds, and has dragged the U.S. in.

And the U.S. does not currently have full access to Incirlik: Turks have obliged U.S. to ask Turks first – always with strings attached – and as part of a [tactic to] circumscribe NATO.

[Turkey is a NATO member, remember]

Turks using bombing runs to kill Kurds because of its own politics – is fighting Assad via a proxy. Turkey is providing aid to ISIS. Meanwhile, only the Kurds have helped the Yazidis. The Obama Admin. has left the Kurds in a weaker position by getting in bed with Turkey.

Turkey Attacks the Kurds and the Islamic State

The Turkish military campaign against the Islamic State (IS) and the Kurdish Kurdistan Worker’s Party (PKK), which began in the last days of July 2015, fuel suspicions as to the real motives behind the sudden involvement of Turkey in a conflict it carefully managed to distance itself from for more than four years.

As a matter of curious coincidence, the Turkish military campaign began three weeks after the Egyptian military revealed on July 8, 2015 that it had captured Turkish intelligence officers who were actively involved in the guerrilla war waged by the Islamic State in Sinai and inside Egypt itself against the Sisi regime.

Four days later, on July 12, the Egyptian military spokesman announced the uncovering of a “terrorist cell” whose instructions were given by the Muslim Brotherhood headquartered in Turkey and whose mission was to destabilize Egypt.  (See Egypt Accuses Turkey of Subversion)

Out of the 1,302 people arrested in Turkey, in what officials have described as a “full-fledged battle against terrorist groups,” 847 were accused of links to the PKK and just 137 to Islamic State.

The Turkish Air Force has turned its fire mainly against Kurdish PKK militants in Northern Iraq and PKK shelters, bunkers, and storage facilities in the Qandil Mountains where the PKK high command is based.

Concerned by the renewed Turkish military campaign against the PKK, Selahattin Demirtash, the leader of Turkey’s pro-Kurdish opposition People’s Democratic Party (HDP), accused Erdogan of launching airstrikes on Kurdish targets in order to prevent the Kurds from unifying areas they control in Syria. 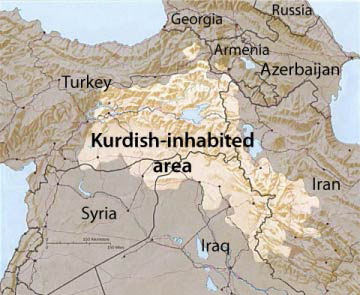 Back to Jonathan Schanzer, from his August 11 report for the Foundation for Defense of Democracies, The perils of [the U.S.] joining Turkey in the fight against ISIS, which includes a crash course on the history of the U.S. use of Incirlik, omitted here:

If permitted, Incirlik could also provide the United States much needed ability to deploy combat search and rescue (CSAR) teams closer to ISIS territory. From bases in Turkey, CSAR teams flying in tilt-rotor V-22 Ospreys can reach deep into Syria, including to ISIS’s capital, Raqqa, in under an hour, raising the chances of successful hostage and pilot recovery.

In the case of the Jordanian pilot downed in December 2014, U.S. Marines based in Kuwait were dispatched to rescue the pilot but failed to reach him in time. The incident lead to the subsequent suspension of operations by the UAE because the Emiratis believed American CSAR assets where not based close enough to Syria.

Yet despite all of the upside, working with Turkey comes at a cost. The decision to allow Americans to fight from Turkish territory after more than a year of stalling came only after a brutal suicide bombing by a Kurdish jihadist. That attack prompted Ankara to call for action against ISIS, but it also targeted the PKK, thereby suspending peace talks that had been in the works with the Kurdish terror group since late 2012.

Critics of the Turkish government say that ISIS is not the real target. They say that Turkey is really only interested in settling scores with its longtime nemesis, the PKK, and obstructing the advance of the Kurdish People’s Protection Units (YPG) against ISIS on its Syrian border.

The YPG are closely affiliated with the PKK, yet they have acted as one of America’s best allies on the ground in Syria, helping to coordinate airstrikes and reversing ISIS’s momentum in northern Syria.

Whether Ankara has ulterior motives is still unclear, but when it has come to fighting the jihadists in Syria, Turkey’s Islamist government has been playing a double game.

Turkey’s lax border policies, which were designed to help precipitate the downfall of Syrian dictator Bashar al-Assad, have instead served to benefit many of the jihadi factions now fighting in Syria.

Turkish authorities have not only turned a blind eye to the traffic along the 565-mile border, they have been accused of actively assisting fighters to cross the border.

Multiple reports suggest that extremist financiers (mainly from Gulf countries such as Qatar and Kuwait) have been camped out in hotels along the southeastern Turkish frontier, where they have been meeting with jihadist groups since 2012. Meanwhile, the oil fields ISIS conquered have become a significant source of revenue with Turkey serving as the market for the oil.

According to Turkey’s main opposition party, $800 million worth of oil from ISIS-occupied regions may have been sold in Turkey in 2014.

Several reports even suggest that Turkey has supplied weapons to jihadi groups operating along the Turkish border, including Jabhat al-Nusra [al Qaeda franchise] and ISIS. Since 2013, accusations have come from both former Turkish government officials and current opposition parties.

The most jarring headlines appeared on January 1, 2014, after the Turkish gendarmerie stopped a suspicious truck headed to Syria in Turkey’s Hatay province. They found weapons and ammunitions that allegedly belong to Turkey’s intelligence agency.

About two weeks later, on January 19, soldiers stopped and searched another group of trucks in Adana, also carrying weapons that linked to the intelligence agency.

Testimonies by two Turkish truck drivers from the Adana case pointed to direct Turkish government involvement. The likely beneficiary was Ahrar al-Sham, the Salafist group with close ties to al-Qaeda.

Back to John Batchelor's discussion with Jonathan Schanzer, which can be heard in full in the podcast:

"The entire region is convulsing."

Here I am reminded once again of Michael Vlahos's hilarious remark to Batchelor years ago, at the time it became evident that Afghanistan under the NATO-ISAF coalition was descending into chaos.

Vlahos said peevishly, "This is Kipling without the fun. How did we get here?"

Chess, anyone? Or maybe another reading of Clausewitz? Or what about another study of Metternich's ideas?  But no, I think the answer to Vlahos's question can be found in How to Can, Freeze, Dry and Preserve Any Fruit or Vegetable at Home.