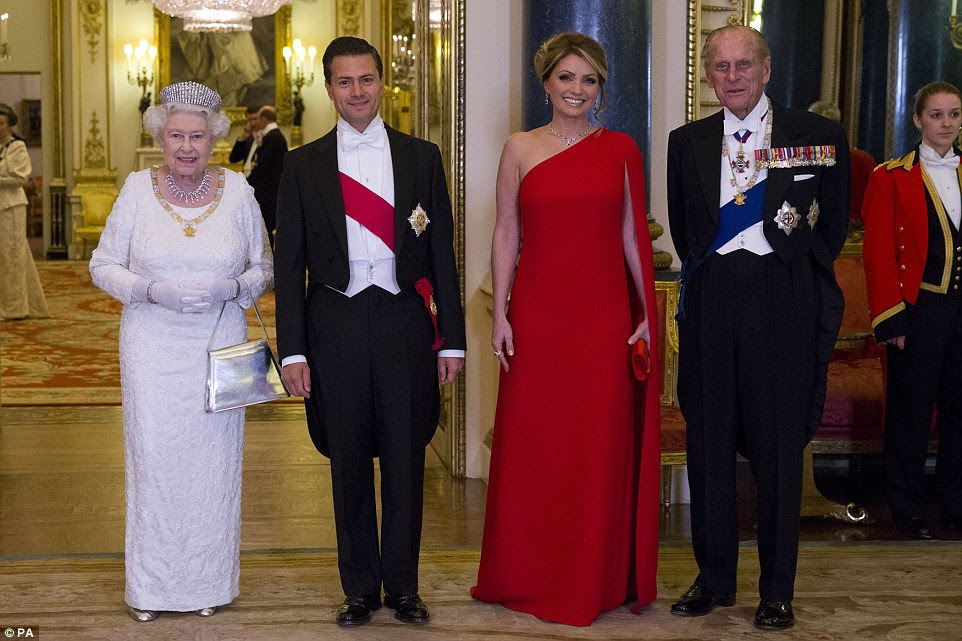 The Queen with the President of Mexico, Enrique Peña Nieto, his wife Angélica Rivera and Prince Philip


Quinones said he saw a T-shirt for sale in Xalisco that summed up the motivation: "I want the fast life," it said in Spanish. "Because when you're poor they humiliate you."

From The Kingpins: The fight for Guadalajara:

In Mexico, it is often impossible to know who is behind something—a massacre, a candidacy, an assassination, the capture of a crime boss, a “discovery” of high-level corruption. Either the truth is too fluid and complex to define or it remains opaque to anyone not directly involved in manipulating events.

This may help to explain how a city widely understood to be under the control of a leading international crime group—the U.S. Treasury Department recently labelled Joaquín Guzmán, who is fifty-five, “the world’s most powerful drug trafficker”—can regard itself as a jacaranda-shaded refuge of high culture and legitimate commercial vitality. Both descriptions are true, and both realities are under siege.

When Mexicans discuss the news, they talk often about pantallas—screens, illusions, behind which are more screens, all created to obscure the facts. Peña Nieto is depicted, in cartoons, as a carnival mask behind which laughs Carlos Salinas de Gortari, a former President, who is still regarded as enormously powerful.

I can’t count the number of times I have asked someone about a news story and been told, “Pantalla.”

This is a problem for journalism. You fish for facts and instead pull up boatloads of speculation, some of it well informed, much of it trailing tangled agendas. You end up reporting not so much what happened as what people think or imagine or say happened.

The idea of a unified state that is furiously pursuing bad guys is pure pantalla. The low-grade civil war in Mexico takes place on the ground, among factions with shifting loyalties, in cities and villages with tangled histories. The “government” has innumerable faces—it has more than two thousand police agencies, for a start—and its corruption controls are too weak to counter the power of narco billions. Every local commander, every official, and every community must work out an accommodation with organized crime.

Attitudes toward the security forces break down along class lines. The upper and middle classes are still enthusiastic about the Army, the poor far less so. As for the local police, people with more resources regard their corruption as only a nuisance, while the poor find them dangerous: “They’ll put drugs on me, and cause me a lot of problems.”

Everyone in Jablonska’s study feels that Mexican social and political institutions, including the state itself, are weakening. “Some of this institutional weakness comes from the post-PRI fragmentation of power,” Jablonska said.

Everyone has lost confidence in the rule of law. Nearly anyone who can afford it, including the lower middle class, now lives in a gated community, with private security.

“People in more precarious neighborhoods must build their own networks of protection. They rely on pit bulls, family networks, and, of course, organized crime. They never call the police.”

Ninety-eight per cent of serious crimes in Mexico go unpunished, according to a recent report by the Monterrey Institute of Technology. For kidnapping, which is rarely reported, the figure might be even higher. Kidnapping is the horror lapping at the edge of nearly everyone’s mind, and it’s known that kidnapping is one of the Zetas’ favorite crimes. Corrupt police are often involved—one of the reasons it’s rarely reported.

Private security companies seek to capitalize on the public’s panic. When you read a crime story online, the advertisement blinking alongside the text is often an offer of private protection for you and your family against secuestro—kidnapping.

If someone disappears and no ransom call comes, should it even be called kidnapping? Human-rights groups estimate that more than five thousand people have disappeared in Mexico in the past five years.

From The Staggering Death Toll of Mexico’s Drug War:

Last week, the Mexican government released new data showing that between 2007 and 2014 — a period that accounts for some of the bloodiest years of the nation’s war against the drug cartels — more than 164,000 people were victims of homicide. Nearly 20,000 died last year alone, a substantial number, but still a decrease from the 27,000 killed at the peak of fighting in 2011.

To be sure, the homicides documented in Mexico cannot all be linked directly to the drug war, and distinguishing drug-war violence from the raw totals can be fraught with challenges. Many murders are never investigated, and the Mexican government has not issued annual figures on organized-crime-style homicides — those believed to be the work of cartels — since 2010. Even when it did, such data was often knocked for being untrustworthy.

Some counts have blamed the drug war for as much as 55 percent of all homicides. Others have put the estimate as low as 34 percent. Yet those figures have likewise been criticized as unreliable. For example, someone killed by a high-caliber or automatic firearm would be counted as a victim of organized crime, but if they were strangled or stabbed to death, they would not necessarily be considered a casualty of the drug war.

“In any of this data, a lot of dead people are not counted,” said Molly Molloy, a border and Latin American specialist at New Mexico State University. Molloy has focused her research on counting the dead in Mexico, and in an interview with FRONTLINE said, “The violence engendered by the system as a whole in Mexico is so huge and affects so many people in various violent ways, I think you have to look at the murders as a whole, because how are you going to separate them?”

At the end of 2014, Mexico’s 16 billionaires were worth an average of nearly $9 billion.

Economic hardship is widespread in Mexico, which is home to more than 120 million people, more than half of whom lived in poverty at the end 2012. Now inequality and wage disparity have emerged as further challenges to the development of Latin America’s second-largest economy.

According to a study of the 34 member countries of the Organization of Economic Cooperation and Development, the gap between wages and hours worked is larger in Mexico than in any other member country.

The gap in wealth and in wages is visible across Mexico’s economic strata. According to OECD figures, the country’s richest 10% earn more than 30 times what the poorest 10% make — making it the most unequal of the organization's 34 countries. Mexico’s bottom 20% doesn’t make enough to eat three meals a day.

OECD data show that Mexican workers labored 2,327 hours on average during 2014, far ahead of the 1,796 hours worked by Americans.

Those workers, however, were only paid $12,850 (based on purchasing power parity) during the year, which ranks at the bottom of the OECD’s list. Estonia was second to last at $21,020. Americans earned $57,139 during the same period.

In parts of the country where pay is better (i.e. urban zones), the minimum salary for Mexicans is 70.1 pesos ($4.35) per day, according to El Daily Post. The government also sets a monthly minimum income for well-being, including essential purchases like food, transportation, and hygiene, that stands at 2,628 pesos ($163.13) in urban areas.

A worker making the minimum salary would need to labor for just over 37 days per month to bring in that monthly minimum — assuming they didn’t have any dependents to care for.

In total, writes the El Daily Post, more than half of all Mexican workers fall short of this monthly standard.

This shortfall is worse in less developed areas. In the southern state of Chiapas, 70% of workers don’t earn enough to care for two people, based on the minimum monthly salary level.

“The situation is serious to such a degree that it violates what’s stipulated in the Constitution. The minimum salary must guarantee a decent standard of living,” Gerargo Esquivel, a Harvard economics professor, told El Daily Post.

Indeed, many Mexicans fall below Mexican, and even Western, standards of living. According to a report from news site Animal Politico, one out of four Mexican municipalities has living conditions similar to sub-Saharan Africa in terms of illiteracy, access to healthcare, and homes without toilets or solid floors.

This state of affairs, with more than 7 million Mexicans living as if they were in Angola, comes despite a 16% increase between 1990 and 2012 in the budget of a variety of social programs aimed to lift Mexicans out of poverty and hunger. In that time, poverty in Mexico has been reduced by less than two percentage points.

Mexico’s uneven growth has a geographic dimension as well. As Shannon O’Neil of the Council on Foreign Relations noted, industrial and tech areas of north-central Mexico have experienced growth rates in the double digits, and states bordering the US, boosted by industry and trade, have growth rates above the Mexican national average.

However, falling oil prices have hindered growth in southern states (the country now gets more from remittances than oil exports) and the violence-wracked states of Michoacan and Guerrero were both at the bottom of the UN human development index rankings for the country.

Though new developments may aggravate these divides, the divides themselves are not new.

Inequality in Mexico is longstanding, according to Cristina Bayón, an ecologist specializing in the subject. In Mexico, there is an “extremely high tolerance” for an unequal society, she told El Daily Post, “which explains why the rich can be so ostentatious in this country.”