America's Christians are silent about destruction of Christianity in Syria 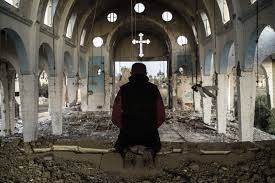 Gary Leupp, an American Professor of History at Tufts University with a secondary appointment in the Department of Religion, is so upset about U.S. actions in Syra (and Libya) that he goes all over the place in his article today for CounterPunch, Reaping the Whirlwind: Kerry, al-Nusra, Russia and Syria. He has a great deal to get off his chest, but I've snatched up the paragraphs that discuss his ire with American Christians; he makes excellent points:


The U.S.’s Silent Christians
You’d think the Christian community in this country would be up in arms against U.S. policy in Syria.   You’d think Christians would realize that their co-religionists in Syria have historically supported the Baath Party (co-founded as it was by the Christian Michel Aflaq) given its secularism and tolerance in the face of powerful, anti-Christian Islamist forces in the country.
You’d think that they’d feel horror at the destruction of what Christians consider part of the Holy Land. St. Paul after all is supposed to have experienced his conversion of the “road to Damascus;” you can still visit the “Road called Straight” where Paul met Ananias, who baptized him. There’s a church there that tour guides tell you occupies the location of Ananias’s cellar.
Christians were first called by that name in Antioch (then part of Syria). Jesus disciple Thomas supposedly did missionary work here. The Great Mosque of Damascus was built on a Christian basilica that claimed to house the head of John the Baptist. The shrine remains within the mosque as a pilgrimage site for all.
Syria has historically had a large Christian minority. After the seventh century Muslim conquests many Christians and Jews in what is now Syria converted to the new faith. (After all, Muslims were tax-exempt.) But as of the 1940s about one-third of Syrians were Christians of various denominations, and about 10% of the population remained so in 2011. But now many thousands are fleeing the chaos and bloodshed of their homeland, meeting with suspicion, prejudice and exploitation at every turn.
The Russian Orthodox Church (which yes, let us note, is pro-Putin) repeatedly draws attention to the plight of Syrian Christians, many of whom share its theological tenets. A Russian Orthodox bishop addressed the UN in 2012 appealing for help in ending the persecution of Christians in Syria. This persecution is obviously not coming from the regime.
Is it not clear that, just as regime change and U,S. occupation produced no good for the Christians of Iraq— whose numbers have dropped from 1.5 million in 2003 to between 400,000 and 200,000 today—it will produce nothing good for the people of Syria?
It is one thing to accept joint U.S.-Russian bombing of people who burn and bury people alive, crucify and behead children, enslave and rape women, blow up priceless historical monuments, use chemical weapons, terrorize whole communities into flight, dispatch operatives to western cities to inflict random terror and effectively use social media to motivate lone wolves globally to seek Paradise (or some sort of final endorphin rush, as the brain dies and paradise within it).
It’s unforgivable that the U.S. through its criminal invasion of Iraq generated these hideous forces. The U.S. is not best placed to handle the repercussions of its actions, and has in the recent past both bombed and aided them as it sought to coordinate with its allies, who have their own competing agendas.
[END EXCERPT]
Posted by Pundita at 10/06/2016 07:19:00 AM