“We basically keep using the water until it runs out:” Alabama drought policy

"Alabama has been dubbed America’s Amazon. It has the most navigable water channels in the country and boasts the most freshwater biodiversity. So dead and dying rivers and streams can spell disaster for ecosystems, as well as local communities living near water bodies and industries relying on these water channels for survival." 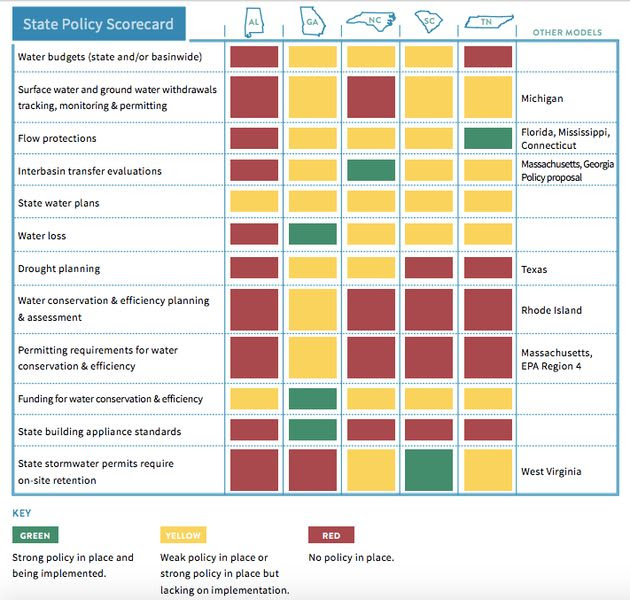 The author of the following report (which includes the above chart) is trying to cover so many bases about Alabama's severe drought that the writing meanders -- although granted she's doing her best to comprehensively inform about a longstanding situation that has gotten virtually no coverage nationally and is now at crisis proportions.

But while I recommend that those interested in drought/water issues read the entire report, here I'll just feature passages that specifically address the state's water management, or rather lack thereof.

But first, a short lecture I've given before. A glance at the chart shows that Alabama, while a 'worst' offender, is by no means the only southeastern U.S. state with wretched to nonexistent water policy implementation.

The story the chart tells is also the story of the tug-of-war in America between federal and state control. The states want a great deal of control -- until they apply for federal disaster aid.

That aid was originally conceived to address disasters that are Acts of God. But it's become a way for state residents to avoid responsibilities related to preparing for natural disasters and mitigating their worst effects.

That laissez faire approach will be derailed at the worst possible time for Americans: when several states are hit by natural disaster(s) in the same period. Not to plan for this eventuality is folly; take a look at today's headlines out of Italy if you need a reminder of why.

Alabama’s ‘Worst Drought In Memory’ Is About To Get Even Worse
By Dominique Mosbergen
October 28, 2016 -- 08:34 am EDT
Huffington Post

With 98 percent of the state affected, Alabama’s abysmal water management planning is under intense scrutiny.

Forecasters said this week that the drought is showing no signs of abating. Alabama will likely experience not a wet, but a drier than usual winter this year, according to the National Oceanic and Atmospheric Administration. The agency said the drought is expected to persist through Jan. 31, bringing worsening conditions to areas already in the grips of a crisis. It’s anticipated that drought will consume the entire state by year’s end.

[Mitch] Reid is one of many water management experts and activists who believe that a central contributing factor to Alabama’s current drought emergency is a total failure of the state’s government to manage its water.

When it comes to water management, “Alabama is definitely the laggard state in the Southeast,” said Gil Rogers, director of the Southern Environmental Law Center’s Georgia office. “If Alabama had a better way of regulating and prioritizing water use, at least some of the drought impacts could be better mitigated.”

Alabama is the worst state in the Southeast in terms of water management, security and sustainability, according to a September report from the National River Network.

The state doesn’t have a statewide water budget, a monitoring plan for surface and ground water withdrawals, flow protections, drought planning, or water conservation and efficiency planning, among other water policies, the NRN found.

And it’s not just regionally where Alabama is failing.

In 2012, The Alliance for Water Efficiency and the Environmental Law Institute’s national assessment on water efficiency and conservation gave Alabama, along with four other states, the very worst score: 2 points out of a possible 40, or a “D” grade.

“There’s a complete lack of a water plan in Alabama, and if you look at the history of water management in state, we always freak out in droughts,” said Reid. “We basically just keep using the water until it runs out.”

State officials declared a drought emergency this month, in which they “strongly urged public water systems and other users of large amounts of water to continue to carefully monitor conditions and implement their drought conservation plans, as needed.”

But without a clear statewide mandate, “what does that really mean?” asked Reid. “There’s really no specific actions the state is supposed to take.”

“There are no records of who’s using water where and when, so it’s just lots of pointing fingers. It’s like the Wild West,” he said.

While streams are running dry and farmers are struggling to grow crops, some companies and individuals are still using water excessively in drought-stricken parts of the state, Reid said. Just upstream from his home and the bone-dry Patton Creek, a golf course has continued to irrigate its lawns, he said.

“Without a plan, water users are not required to conserve their water, even during a drought,” Rogers said in an email this week.

Nothing concrete, however, has yet emerged from this initiative.

Still, William Aldreen, an environmental law professor who specializes in water management at the the University of Alabama, told The Huffington Post this week that the state appears to be “in the midst of an attempt to create a more rational approach to water management in the future.”

“That effort, I would hope, will produce a permit program for large water withdrawals, a system that will establish and implement environmental flows on our rivers and streams, and a more effective approach for dealing with droughts,” he said.

However, an effort to create “a more rational approach, rather than the essentially laissez faire approach we have now” will only be successful if “stakeholders look to the common good of the state, as opposed to more narrow economic interests,” Aldreen warned.

State legislators will also need to “have the courage and wisdom to act,” he added.

Many observers say it’s still too early to tell whether Alabama’s water plans will succeed. But most agree that the time to act is now — both to address the current crisis and to mitigate future drought disasters.

“Alabama cannot afford to continue this pattern of sitting idle, even as the warning signs start to emerge,” Rogers said.

The governor needs to take immediate action to restrict all outside water use across the state, according to Reid. “We don’t want to see more rivers and streams turn into Patton Creek,” he said.