How to kill a lot of Taliban in Afghanistan? Arm Afghan women. There's just one catch. 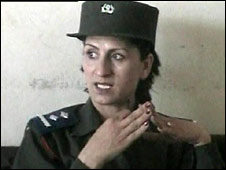 Photo at left: Police Lt-Col Malalai Kakar, head of Kandahar's department of crimes against women, once killed three would-be Taliban assassins in a spectacular gun battle. The Talban finally killed her in September 2008 in a sneak attack.

Nine years into the Afghan War it's time for ISAF to listen to advice that Canadian feminist Wendy McElroy gave in November 2001. Writing for Fox Opinion McElroy noted in part:

In the 1970's, Afghan women were among the most Westernized and liberated in the Islamic world. Their pre-Taliban role as doctors, bankers, lawyers, and teachers has been well documented. But almost no attention has been given to the part they played as freedom fighters against the Soviets, or to their potential for armed resistance against future oppressors who may again try to hijack the country as the new government takes form.

Yet the evidence indicates that many Afghan women would fight to protect themselves and their families.

In October 1996, the New Internationalist magazine interviewed Nooria Jehan, a mother who joined the anti-Soviet mujahideen in guerilla warfare.

"I learned explosive techniques and began supervising and teaching the younger men," Nooria recalled. "We would stick explosives and detonators under the Russians' tables and chairs."

When asked what she would do if the women-hating Taliban captured her city of residence, Kabul, Nooria said, "We will fight them as we fought the Russians."

That is what some women have done. In the Nov. 12 Newsday, journalists Matthew McAllester and Ilana Ozernoy quoted a woman named Malika, a mother whose family lived on the Taliban front line of Bagram just north of Kabul.

"At night I go up on the roof with my Kalashnikov [a Russian assault rifle] and my hand grenades to protect my house," Malika declared.

As the journalists commented, the very existence of Afghan women who take up arms suggests "a female population with more vitality and self-confidence than is immediately apparent." ...

In 1964, Afghanistan adopted a constitution that included universal suffrage and equality for women. Women assumed roles in both the government and the judiciary, and constituted some 30 percent of Afghanistan's civil service. But active participation in government didn't prevent the Taliban from shrouding them in burqas. The ability to defend themselves might have.

Western forces cannot and should not patrol the streets of Afghanistan to prevent violence against women. If these women are to resume the Western advantages of having careers, freedom of speech and representation in government, they must also assume the responsibility of self-defense.

That explains why Afghan women in the country's north, which up to this point has been the region safest from the Taliban, are now retreating behind the veil out of fear that the Taliban are advancing on the north. With Karzai's regime pandering to Saudi Wahabist ideology, the women of Afghanistan can't expect support from their government in standing up to the Taliban. They can't expect much support from the ISAF, either, which is pandering to Karzai's moral cowardice.

It also explains why recruitment for Afghan female police trainees is way down: As of June 2010 there were only 1,100 women in a police force of 107,000.

I recall several women in the Adhamiyah section of Baghdad. They got tired of cowering inside the house while their menfolk took up patrols against al Qaeda and insurgents. The women asked for and received training from U.S. forces in handling weapons and doing patrols.

See The Tension blog for more of the story.

I also find myself recalling the first time I heard Christopher Hitchens speak. I don't remember what year this was -- the years blur together in my memory since 9/11 -- but it might have been around the time of the U.S. invasion of Iraq. He was a guest on a short-lived TV talk show hosted by political conservative Tucker Carlson. Hitchens, a leftist, was a strong supporter of the invasion and the U.S.-led war on terror.

They were discussing a communist insurgency group in Iran that the U.S. regime had labeled a terrorist organization, yet which was the only group in Iran making a strong stand against Iran's totalitarian Islamist regime and institutionalized misogyny.

Hitchens said, "I keep telling conservatives that the communists are the best friends America has in the war on terror."

I muttered at the TV, "With friends like that we don't need enemies."

Today, I'm not so sure. Not after reading the Wall Street Journal report I linked to above and pondering the extent of my government's hypocrisy regarding Islamism in Afghanistan and Pakistan.

How did it come to the point where U.S. forces, which defend a country founded on Christian principles, now fight to protect a regime in Afghanistan that serves up the death penalty for anyone proselytizing for Christianity? How did we arrive at the juncture where America, which enshrines women's rights, props up a regime that is trampling the rights of Afghan women and females seeking refuge from severe abuse?

The only answer I find comes from the cynical wisdom of George Gurdjieff, who observed that people who live in sleep always bring about the very situations they most wanted to avoid.
Posted by Pundita at 8/05/2010 08:21:00 AM