Europeans must dismantle NATO before it destroys them

The sight of a US military convoy crossing the German-Polish border more than 20 years after the end of the Cold War made international headlines and brought traffic to a standstill as people posed for selfies beside the troops.
The intention of such a highly visible deployment was to send a signal, Gen Hodges said.
"That's exactly what it was about, reassuring our allies," he said.
**********
I don't cry easily -- well, at least not since deciding I was too damn old to cry anymore -- but I felt my eyes mist when I saw this recent photograph of German Chancellor Angela Merkel in the U.K. Telegraph.  (Leaders' snub of Moscow victory parade 'insult to soldiers', says Russia; March 23)

It's tough having the weight of the world on your shoulders but that's not what got to me.

She's older than when she and Russian President Vladimir Putin shared laughs at a trade exhibition. They were having so much fun the Reuters photographer fair went bonkers taking scores of shots of the merriment; here's a couple more  -- 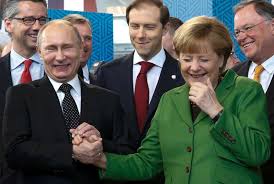 But as one looks through the many photographs of them together in other venues it's clear these people weren't putting on a show of friendliness for the camera. They are genuinely comfortable with each other, enough to be themselves in each other's presence and bluntly speak their minds. 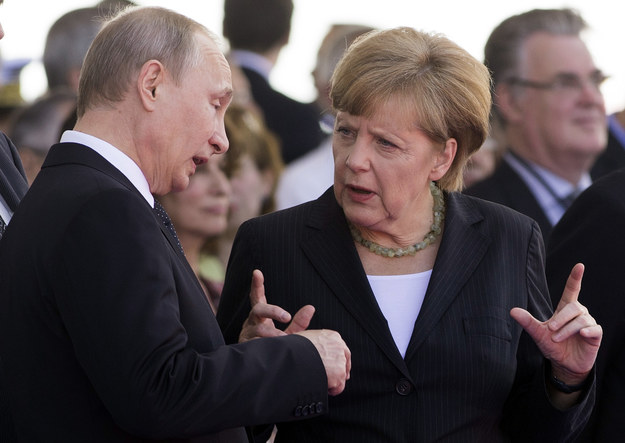 And while they let President George W. Bush "in" it was to make a guest welcome. Bush is comfortable in his own skin and has the Texan's common sense not to overstep his bounds so while he laughed at Putin's jokes, he didn't try to take control of this most crucial and even epoch-making relationship -- unlike Barack Obama, a rootless man driven to absorb other people's characteristics so he can dominate those he must deal with, reducing the risk of rejection.

Obama set about absorbing Putin's personality when he met him, even mugging in the way Putin does when he's being silly, and imitating his walk and way of sitting.  But he couldn't close in on him, and for all his chameleon ways couldn't insert himself in the relationship between Putin and Merkel much less control it.

He didn't understand that whatever fortuitous combustion of personalities he saw between the two heads of state was grafted onto very deep roots.  There was a lot of dried blood on the roots but the shared history gave a dimension to the relationship that can't be gained by mere sociability and personality.

It is really quite striking to see photographs of the pall Obama cast when he was with Merkel and Putin.  Yet in some photographs I've seen what I think is an unasked question in Merkel's eyes when she looked at Obama in an unguarded moment:  What does this American want?

He wants things that rooted people, people with a deep sense of belonging to a place, can't understand.

It wasn't only Merkel and Putin.  Time and again in Europe he found himself held at arm's length by the famous European charm toward guests, honed over thousands of years into a very effective shield against the encroachments of outsiders.

If Obama can't dominate he withdraws unless his wife can intercede.  And so he withdrew, leaving assessments about Europe and Russia to a parade of advisers.

Several of these were either uprooted Eastern Europeans or first-generation offspring of the uprooted; all of them sharing an abiding hatred of Russia from the Soviet era.

Another type of adviser with even greater clout is harder to define and yet it's dominated in Washington since long before Barack Obama became U.S. President -- since before he was born  The closest I can get with words to explaining is to say it's an American who can't forgive two world wars.

Historical facts and nationalities don't matter here. It's all of them, all Europeans, because that's the way they are, and they'll never change.  Take your eyes off them for 15 minutes and they'll be starting another world war.

How is one purged of existential sin?  One isn't.  Studying the stoic resignation in Angela Merkel's face today, I think she understands this now. There's no way out and there never was. There are doors all over Europe but they open onto the same brick wall.

The commander of the US army in Europe, Lt-Gen Frederick "Ben" Hodges, says that Nato must remain united "as insurance" against Russia

The commander of the US army in Europe has warned that Nato must remain united in the face of a "real threat" from Russia.

"It's not an assumption. There is a Russian threat," Lt-Gen Frederick "Ben" Hodges said.

"You've got the Russian ambassador threatening that Denmark will be a nuclear target if it participates in any missile defence programme. And when you look at the unsafe way Russian aircraft are flying without transponders in proximity to civilian aircraft, that's not professional conduct."

Gen Hodges spoke to the Telegraph on the sidelines of a military debriefing after a exercise to move live Patriot missiles 750 miles across Europe by road and deploy them on the outskirts of Warsaw.

The sight of a US military convoy crossing the German-Polish border more than 20 years after the end of the Cold War made international headlines and brought traffic to a standstill as people posed for selfies beside the troops.

The intention of such a highly visible deployment was to send a signal, Gen Hodges said.

Successive attempts to resolve the ongoing war in the Donbass region of Ukraine had seen no result by the start of February 2015  While the Minsk Protocol of 5 September 2014 did significantly reduce fighting in the conflict zone for many months, minor skirmishes continued. At the start of January 2015, the separatist forces of the Donetsk People's Republic (DPR) and Lugansk People's Republic (LPR) began a new offensive on Ukrainian-controlled areas, resulting in the complete collapse of the Minsk Protocol ceasefire

After heavy fighting, DPR forces captured the symbolically important Donetsk International Airport on 21 January, the last part of the city of Donetsk that had been under Ukrainian control. Following this victory, separatist forces pressed their offensive on the important railway and road junction of Debaltseve in late January.

The Franco-German plan, drawn up after talks with Ukrainian president Petro Poroshenko and Russian president Vladimir Putin, was seen as a revival of the Minsk Protocol.

President Hollande said that the plan was the "last chance" for resolution of the conflict.

The plan was put forth in response to American proposals to send armaments to the Ukrainian government, something that Chancellor Merkel said would only result in a worsening of the crisis.

The phrase "all Europeans, because that's the way they are, and they'll never change." is wrong. Not all the europeans are not created equal. A german will think different from a french despite the fact that they are separated only by the Rhine river.
Russia was a constant danger for Europe for 200 years. The russian troops crushed the 1848 revolutions in eastern Europe. The tzarist Russia started progrom's against jews,and started ethnic cleansing since 18 century. In Western Europe only the nazis made more crimes.
If Germany would won world war 2, it would look like Russia today.