Mexico City's iconic Gilded Angel of Independence,
trying to keep her footing in a sinking city 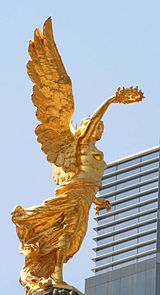 Mexico City is drinking itself into the ground

[...]
Roughly 20 per cent of Mexico City’s residents cannot guarantee that water will come out of their taps every day, and the ground is sinking by as much as nine inches a year in some suburbs. That’s the equivalent of nearly a storey a decade.

The city’s cathedral, which took more than 200 years to build, has a leaning chapel and bell tower, propped up by stone wedges to stop the whole thing crumbling down. The Gilded Angel of Independence – a local tourist hotspot and national landmark – was built with nine shallow steps leading up from the street below. As the surrounding area has sunk, an extra 14 large steps have been added as the angel is increasingly left marooned above a vanishing city.

Slanted buildings leer menacingly over pavements, their doors and windows no longer in alignment with their friends as if crudely displaced from a grotesque theme park funhouse. Terraced streets built on level ground now undulate, with wavy gables crowding up against each other in parts, and pulling away in others, while city-dwellers struggle up hilly pavements where once the path was flat.

In Iztapalapa, a suburb of approximately 2m people built on the ancient lake’s southern shores in the city’s south-east, 15 primary schools have crumbled or caved in, and a teenager was swallowed up when a gaping crack appeared in the street.

Jack May provides an entertaining account of how it all began but to cut to the uh, bedrock of Mexico City's problem, he delivers the clearest explanation I've come across:

The city is built on two different geological foundations. Some of the ground underneath Mexico City is volcanic soil, which was fertile and used by the Aztecs for growing crops. It was also handily water-absorbent: moisture would soak in and flow to underground aquifers easily, without damaging the structure of the soil.

But when developers built on the volcanic soil and covered it in concrete and asphalt, water could no longer get through to the soil and filter through to the aquifers on which the city relies.

And that’s what’s happened beneath Mexico City. Desperate for water in a lake basin devoid of a lake, the city has tapped into the clay soil while covering over the useful volcanic soil.

And as the city is built on a mixture of both geologies, it has sunk in an uneven, mismatched way, causing dangerous fissures, cracks, and the bizarre phenomenon of wavy, undulating streets.

It is estimated that the city has dropped 10 meters in the last century; if anything the signs are that this process is accelerating.

As to whatever happened to that famous lake -- go to the start of May's report then read on.

I think his writing makes a good companion piece to the Guardian's truly splendid February 2014 report by Kurt Hollander, and which I've featured before, Mexico City: water torture on a grand and ludicrous scale: A grossly inefficient sewage system makes the city's tap water filthy and consigns millions to disease, will it ever improve?