After pointing out that Beijing has prevented anyone even remotely associated with jailed activist Liu Xiaobo from accepting the Nobel Peace Prize on his behalf, B. Raman observes that tomorrow's award ceremony is likely to be purely symbolic. Then he lets rip:

The Chinese bullying campaign to intimidate other countries into boycotting the symbolic function at Oslo by using Beijing's economic clout has considerably succeeded at least in Asia, as would be evident from the reports that only India, Japan, South Korea and Thailand have rejected the Chinese pressure not to attend the function. One is surprised by Vietnam, which one would have expected to stand firm to China, succumbing to the Chinese pressure.
[...]
It will be interesting to watch how Beijing reacts to the obvious and well-deserved snub from New Delhi on the issue of the Oslo function. At the worst, Prime Minister Wen might cancel his forthcoming visit to India for three days from December 15 before proceeding to Pakistan. It is hoped good sense will prevail and Beijing will not take this extreme step, but, if it does, so be it.

We cannot go on pampering and appeasing China, particularly when it is so blatantly insensitive to India's major concerns relating to issues such as the Chinese refusal to issue normal visas to Indian citizens living in the Indian territory of Jammu & Kashmir and when it has been taking actions to undermine our claims of sovereignty over Gilgit-Baltistan and other areas of Pakistan-Occupied Kashmir.

Strict reciprocity should be the rule in our relations with China. If it ignores our sensitivities in matters of vital interest to us, there is no reason why we should be unnecessarily responsive to its concerns in relation to Tibet.
[...]

Hear! Hear! But it's not only the Asian branch of the Wet Noodle Spine Club that needs to quit pampering and appeasing China the Prima Donna. For now, though, credit the Asian leaders with the conscience to honor Liu Xiaobao in Oslo.

It's easy for me to sit here in Washington and tell the rest of Asia to show more spine but that would be the pot calling the kettle black, and the closer one is to the opera the harder it is to thumb one's nose at the prima donna. The four Asian leaders showing up in Oslo on December 10 are demonstrating real courage because every one of them has to lot to lose by crossing Bejing. Bravo, gentlemen!

The folowing photos are presented in alphabetical order -- and I did not forget to add 'South' to 'Korea.' Lee Myung-bak has been harshly criticized for not taking stronger action against the Kim dynasty's provocation but by holding fire he's signaling that the family does not represent the interests of the Korean people. I'm just following his cue; no more mention of 'north' and 'south' Korea on this blog. (The photograph of him is taken at the Olympics.) 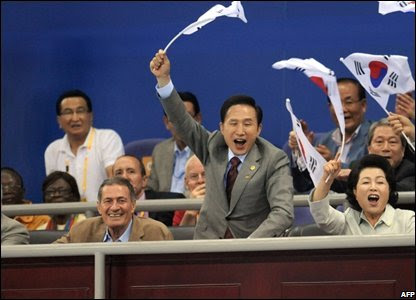