Amrullah Saleh comes to Washington with a message 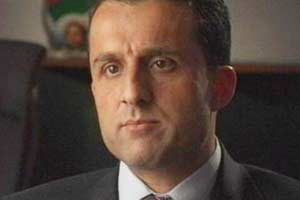 Amrullah Saleh spoke at the Jamestown Foundation's Fourth Annual Terrorism Conference, which was held at the National Press Club on December 9. I note that The Washington Post (a conduit for State Department views) didn't send a reporter to cover his remarks and instead published the Associated Press wire service report on them.


It's easy to see why the Post liked the AP report, which gives space to a Pakistani rebuttal and omits key statements made by Saleh. The reporter for Mother Jones did scoop up the key statements:

"We hear the speeches of major western politicians saying, 'failure is not an option.' Now it seems as if failure is an option. And my key message, coming to Washington, is this: it is a winnable war. The nature of our enemy has not changed."

He added: "People like me, who see the future of Afghanistan hanging on a cliff, we are preparing for Plan B."

State, the Pentagon, and the NSC do not want to promote any talk about the United Front taking matters into their own hands if NATO keeps screwing around in Afghanistan. But the AP report also contains valuable information on Saleh's remarks so below are both reports (with the above quotes omitted from the Mother Jones report):

It's no surprise that Amrullah Saleh, the former head of Afghanistan's National Directorate of Security, was jettisoned by Hamid Karzai back in June (or resigned, depending on the telling), ostensibly for failing to thwart a bomb attack. As Saleh made clear during a speech at a Jamestown Foundation conference on Thursday, he believes Karzai's signature strategy for ending the war, reconciliation with the Taliban, will lead to disaster. And he said the Afghan leader's drive to pursue this strategy shows just how detached his administration is from the reality on the ground.

Western officials had long viewed Saleh, an ethnic Tajik, as one of the most intelligent, trustworthy, and effective members of the Karzai government. A veteran of the Northern Alliance [United Front], fought alongside the legendary Ahmed Shah Massoud against the Taliban in the 90s, eventually becoming his intelligence chief, a role he reprised in the Karzai government.

In his speech, Saleh keyed in the pitfalls of negotiating with Taliban. "What has blurred the narrative of the war, is the talk of reconciliation," Saleh told the Jamestown audience. "We could [have reconciled] with Al Qaeda and [the] Taliban on September 14, 15, [or] September 20, 2001. What was the need for these billions and billions of dollars to be spent [on the war]? It’s the same enemy."

And in its desperation to achieve a breakthrough in the talks, the Karazi government overreached. That resulted in what Saleh referred to as the humiliating "bogus Mansour" episode, in which a grocer successfully duped government officials into believing that he was, Mullah Akhtar Muhammad Mansour, a high-ranking Taliban leader willing to come to the negotiating table. Saleh says his agency had vetted and rejected the man back in 2008 after he was unable to verify his identity, and that the Karzai government's zeal to reach a historic deal with the Taliban akin to the Good Friday Agreement or Dayton Accords -- demonstrates its unrealistic hopes for a breakthrough at this juncture.

Brokering a deal with the Taliban, in his view, serves as an excuse to draw down the United States' troop presence in the country without assessing whether any of the on-the-ground facts have changed. "A deal may bring deceptive stability, but it won't bring a long lasting stability where Afghans or foreigners will have confidence to invest, [to] convert Afghanistan into a viable economy," he said.

He questioned those skeptical of the Taliban's strength. "Will they be able to threaten our key and national interest by possessing AK-47s? Remember, when they helped Al Qaeda do 9/11, they had the same weapons."

His solution? "DDR" the Taliban. "Demobilize them, disarm them, take their headquarters out of the Pakistani Intelligence basements... Push the Taliban to play according to the script of democracy -- and if they win...allow them a chance to govern." He's confident, though, that "they will die in democracy, they will die in a country where law is ruling, not guns, not IEDs, not the spread of fear and intimidation."

Saleh also has a pretty good idea of where to change the narrative of the war: Pakistan. Since 9/11, he says, Pakistan has provided only "retail" and not "wholesale" cooperation. Time after time, the United States has been duped into trusting the country and its intelligence services. Saleh even claimed that Pakistani officials have privately admitted to him that their country has yet to change its ways despite their frequent promises to do so.

"Now the United States believes that by giving more money and resources to Pakistan, you can convert their behavior from bad to good…but it is rewarding bad behavior which [continues] that bad behavior."

Until then, government officials and security forces must be more independent, and demonstrate their accountability to Afghans, Saleh argued. Afghans and their government must be prepared for the day when an exhausted United States and NATO decide to leave their country. [...]

Now to the AP report. Note the anonymous Pakistani official quoted in the report chose to listen to only part of Saleh's statement when the official expressed relief that Saleh was at least in favor of the Afghan government talking with the Taliban. Yes, but Saleh clearly didn't think the Taliban would ever accept democracy.

And as to how many of those 550 slain Pakistani officers died fighting the Afghan Taliban, I believe that's a state secret:

WASHINGTON -- Peace talks with the Taliban will lead to disaster unless the insurgent group is disarmed first, Afghanistan's former intelligence chief said Thursday.

Amrullah Saleh, who headed Afghanistan's spy agency from 2004 until earlier this year, said the key to peace with the Taliban is cutting off their support from Pakistan and disarming and dismantling the group before allowing them to operate as a normal political party.

"Demobilize them, disarm them, take their headquarters out of the Pakistani intelligence's basements," Saleh said. "Force the Taliban to play according to the script of democracy," he added, predicting the party would ultimately fail, "in a country where law rules, not the gun ... not the law of intimidation."

Saleh said the United States should give Pakistan a deadline of July 2011 to pursue top insurgents inside their borders or threaten to send in U.S. troops to do the job.

Saleh, who headed the Afghan National Directorate of Security until he resigned last June from Afghan President Hamid Karzai's government, warned an audience at the National Press Club that failure to cut off Pakistani support would allow the Taliban to only pretend to make peace, then sweep back to power after NATO troops leave.

The former spy chief's comments display the dissension at the highest levels of Afghan political society over whether to engage the Taliban in talks, or keep fighting them. His criticism of Pakistan also highlights the widespread suspicion among Afghanistan's elites that the neighboring power continues to allow militants to flourish inside Afghanistan.

U.S. officials have said that such a deal is key to drawing down U.S. and NATO troops, starting in July 2011, with eventual handover to Afghan forces in 2014.

Saleh said this year's surge of U.S. troops had accomplished a "temporary effect" of securing some territory, but failed to change the "fundamentals."

He added: "The current strategy still believes Pakistan is honest, or at least 50 percent honest." Still, he predicted Pakistan would continue to support the Taliban and other proxies to try to maintain influence in Afghanistan.

Saleh ran Afghanistan's intelligence service after serving in the mostly ethnic Tajik Afghan Northern Alliance, which battled the Taliban before the U.S. invasion. Many members of Tajik regions together with other Afghan minorities have warned of another Afghan civil war if Karzai makes a deal with Taliban.

Saleh criticized his former administration, without naming Karzai, claiming that "political Kabul" was out of touch with the rest of the country, and too often publicly at odds with NATO.

One Pakistani official approached Saleh afterward and asked privately whether Saleh respected the fact that the Pakistani intelligence service had lost 550 officers since the war on terror began in 2001.

The official said Saleh acknowledged this was true, but insisted more cooperation between the two countries was needed and stood by his claims that Pakistan supports the Taliban.

The Pakistani said he ended the chat saying he was glad Saleh had at least backed talks with the Taliban, with conditions. The official related his comments on condition of anonymity, as he was not authorized to speak to the media.

One of Pakistan's former spy chiefs, who also spoke at the conference, predicted the only way to drive a wage between the Taliban and al-Qaida is peace talks offering the insurgents a way to leave fighting and join the governing process in Afghanistan.

Retired Pakistani Gen. Ehsan ul Haq said peace talks with the Taliban were the only way to drive the group apart from Al-Qaida. Haq said as long as the two groups were comrades at arms, they would continue to cooperate despite their differences.

Haq, former head of Pakistan's Inter-Services Intelligence, said neither Pakistan nor the west had managed to defeat the Taliban with what he called a militarized counterinsurgency strategy. Within Pakistan, he said, the civilian government had failed to backfill the areas the army had won back from the militants.

He said western policies of hunting al Qaida on the ground in Afghanistan, and by drone in Pakistan, has simply fueled their recruitment.