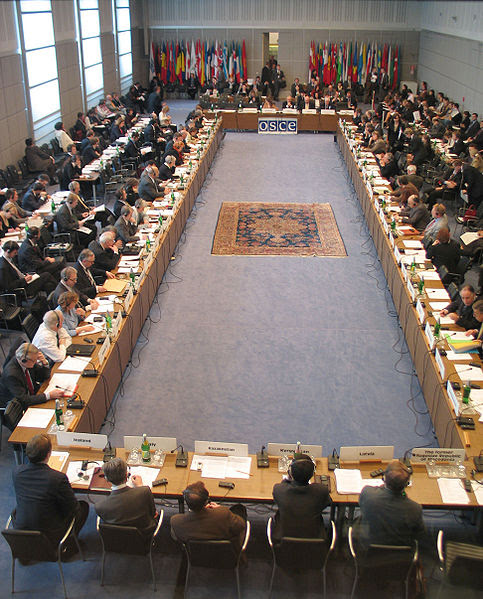 [Flipping her pen in the air] Can't I go on vacation for a few weeks without the cockroaches running riot in Washington? Never mind; it's a rhetorical question.

Actually the OSCE machinations with Thaksin Shinawatra started before my vacation but the situation flew under my radar until some nice person decided to ruin my holiday by alerting me.

The story is that the OSCE (Organization for Security and Cooperation in Europe) invited Thaksin to Washington to testify on human rights violations in Thailand and specifically during the Red Shirt 'riots' this Spring. (See Asia Sentinel report via Irrawaddy , December 15, "Thaksin goes to America.")

Pundita readers might recall what I and the rest of the outside world went through in the effort to get a fix on what was really happening in Bangkok during the riots. It turned out the riots were street theater that masked a sophisticated 5GW-type operation to destabilize Thailand's government, and which pointed to Thaksin as the mastermind.

That's not even addressing Thaksin's alleged human rights abuses and strong-arm tactics while he served as Thailand's prime minister.

In short, asking Thaksin to hold forth on human rights abuses and authoritarian trends in Thailand's government is asking the fox to point out weaknesses in the chicken coop. Despite this, the OSCE decided to give Thaksin a big public platform in Washington at a most sensitive juncture in Thailand's politics. (AFP report today, "Thai PM faces key electoral test in 2011.")

It's possible Thaksin's visa application to enter the USA will be denied, given the terrorism charges against him in Thailand. And his planned appearance in December has been postponed until January, ostensibly because Congress will be in session then, but probably in response to howls of protest from Thailand's government and various quarters in Washington. (The Straits Times, December 13 report, "Thaksin's US Hearing Put Off;" December 7 VOA report, "Thailand May Seek Extradition of Thaksin If He Enters US.")

Yet in light of Thaksin's spotty human rights record while he was PM, and given the great importance of the present Thai administration's assistance to Washington in the war on terror -- assistance which included their part in a sting operation that netted Viktor Bout -- one has to wonder about the backstory to the OSCE decision to call Thaksin to testify.

The Bout arrest is notable in this context because of alleged attempts by some of his buddies in the Russian mobs to bribe Thai officials -- a story that came to public view light in a Wikileaks leaked U.S. State Department cable. (Dec 1 AFP
report)

However, I think the real backstory is the story of the OSCE itself, what it's become since the mid-1990s. (See Wikipedia article on the organization in particular the Criticisms section.)

The larger story is what U.S. foreign policy has become since the mid-1990s. President Bill Clinton's administration was so tilted toward the EU it's not much of an exaggeration to say that during the Clinton era U.S. foreign policy was run from a postbox in Brussels when it wasn't run from London.

Add to this foreign lobbies, U.S. domestic defense lobbies, and U.S. domestic lobbies with foreign agendas have become such a huge industry in Washington since the 1990s that the USA doesn't have a foreign 'policy' anymore. It has thousands of competing interests, which pull members of Congress, key government agencies and the presidential administration in a thousand different directions. That's not policy. That's The Blob.

And the OSCE, a United Nations-chartered organization that is today the world's largest security-oriented intergovernmental organization, is very much a part of the blob. I guess one benefit is that all these European organizations keep the manufacturers of large mahogany tables in business. And I really do applaud the European Union; I am so happy the West Europeans are not always warring with each other anymore.

But it's like ex-smokers who chew gum incessantly: they seem to have replaced battles with councils, which proliferate at an ever-increasing rate. And that's okay for the Europeans, as long as they're happy. But America is not the Roman Empire. It's not the British Empire. And if we don't want to go the way of those empires, we need to stop with our attempts to imitate the Europeans, else we'll be destroyed by the blob, which at last count was ten zillion lobbies, agencies, and NGOs.

And we need to stuff our ears with cotton whenever the EU tells Americans that we must be involved in their way of doing things because the USA is a superpower nation. Seems to me the Europeans are telling every nation it needs to be involved in the EU's way of doing things. The problem is that the European Union is not a nation. It's the world's most powerful trading bloc.

I'm not going to sit here and say that the OSCE has given every sign that it's morphed into yet one more front organization for the European Union. Vladimir Putin has already said it for me. (See Wikipedia's article on the OSCE.) I will say that the OSCE has no business trying to manipulate America's relationship with Thailand and to compound their sneakiness by doing this behind the American public's back.

Before I return to my vacation I will also note that Secretary of State Hillary Clinton's idea is to get the OSCE even more involved in security for Afghanistan. (See December 1 Bloomberg report.) For the love of sanity: we need fewer outside agencies in Afghanistan and less OSCE involvement because with every additional layer of bureaucracy that's imported, this only adds to the corruption and the confusion in the country. But then everyone at State already knows this.