Busy time at the Russian Conciliation Center in Syria 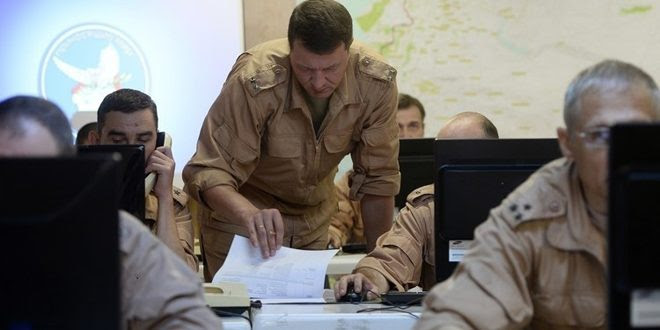 Below, two views of the scene as more than 5,600 civilians in terrorist-held parts of E. Aleppo made a run for it yesterday to a military checkpoint. There were just too many for the terrorist snipers to shoot. 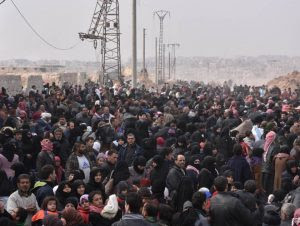 From reports I reviewed this morning, I am getting the impression that the Russian and Syrian governments were caught a little flat-footed by the blinding speed with which East Aleppo and other regions are being liberated by the Syrian Army coalition.

In any case, they're rushing to provide housing, food, medical care and other aid to the tide of displaced persons flooding en masse into areas now cleared of terrorists. Here, two November 29 reports from SANA, Syria's state news agency, on the situation, and one filed today from SouthFront, which couldn't resist thumbing its nose at the West:

UP TO 6,000 CIVILIANS LEAVE MILITANT-HELD AREAS OF SYRIA’S ALEPPO WITHOUT ANY HELP FROM THE WEST

... "During the past day 5,629 civilians, including 2,855 children, left the militants-controlled areas in the eastern part of the city of Aleppo, with the assistance of the Russian Center of reconciliation,” spokesman for the Russian Defense Ministry, Maj. Gen. Igor Konashenkov, said.

Konashenkov added that the people are being placed in special humanitarian centers prepared by the Syrian government. Russia assists in the effort with supplies of food, daily necessities, and medicine.

Russia delivers 10 tons of humanitarian aid to areas in Hama, Homs and Aleppo


Moscow, SANA – The Hmeimim-based Russian Coordination Center announced that Moscow has delivered about 10 tons of humanitarian aid to areas in Hama, Homs, and Aleppo provinces.

The Center said in a statement that it delivered about 7 tons of aid in Jibrin village in the eastern countryside of Aleppo and 2.5 tons in Assila village in Hama province and about one ton in Kafr Abed village in Homs province.

On Sunday, the Center said that it started preparing humanitarian aid to be delivered to the areas in the eastern neighborhoods of Aleppo city where terrorists were expelled.


Aleppo, SANA – Large numbers of locals who were besieged by terrorists managed to exit the eastern neighborhoods of Aleppo city on Tuesday.

SANA’s correspondent quoted a source at Aleppo Governorate as saying that thousands of families managed to exit the eastern neighborhoods, and Syrian Arab Army personnel are receiving them and transporting them to safety, while the authorities at the Governorate are securing the needs for providing temporary residence to those families.

On Monday, army units secured the exit of thousands of locals from the eastern neighborhoods, most of them women and children, transporting them to temporary housing centers, all while the army continues to carry out precise operations to clear the eastern neighborhoods of terrorists in a manner that preserves the lives of civilians and helps evacuate them.

So far, the Syrian Arab Army has restored security and stability to the areas of the Scientific Research Housings, al-Haidariye, al-Sakhour, al-Inzarat, al-Sheikh Khedr, Jabal Badro, and al-Halk in Aleppo city.