Then the Brits noted the Russia had not provided them with conclusive evidence of its non-involvement in the Skripal poisoning incident.

For the rest of the story you'll have to go to Kommersant Business Daily, which got hold of a leaked copy of the British government's presentation to various governments about Russia's guilt, and which served as the basis for several of those governments to expel Russian diplomats.

Oh all right, I'm not doing anything else at the moment so I'll post the machine translation of the report; the machine struggled a bit with a passage in the lede but the rest is clear enough. As to the report's date -- that's wrong. The editor was probably laughing too hard to notice the typo; I'd guess it was published last night or today (in Russia) given the Sputnik and RT reports about it.

Ready? I suggest you crack open a beer before tackling this; I'm on my third. Well, getting sloshed was easier than standing on my head to make sense out of the presentation. I must say, only a government presiding over the U.S. dollar laundering capital of the world would find such a clever way to solve a crime.

As to how I know London is the greenback laundering capital of the world, I have it on authority from a British cartoon in the Guardian. In the U.K., at least, that's enough conclusive evidence to prove anything. 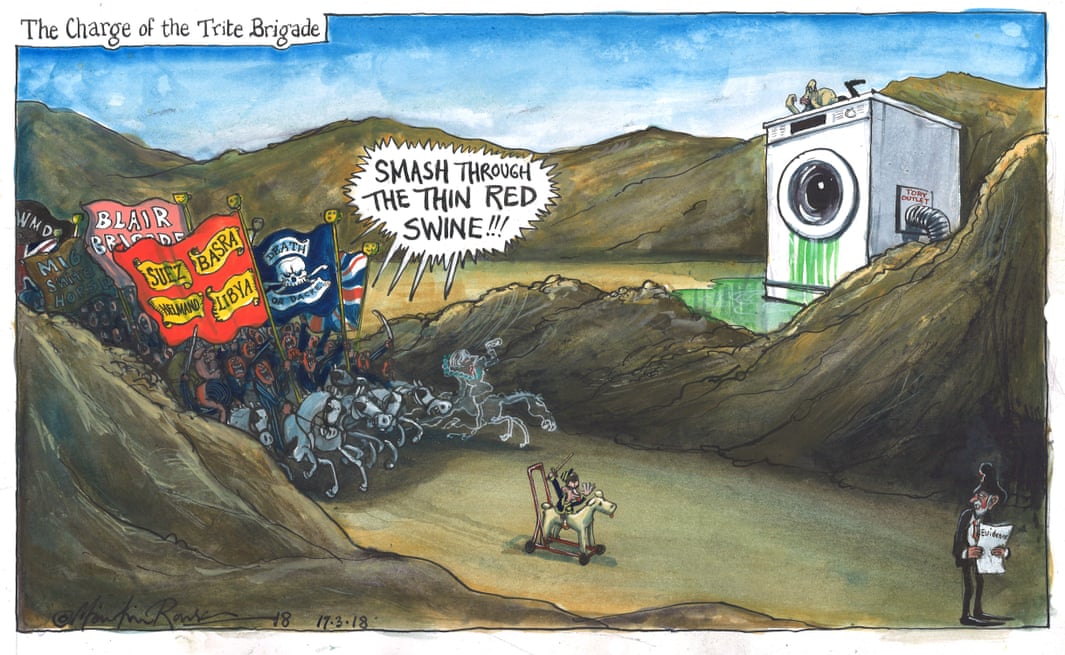 The geezer in the lower right-hand corner is Labor Party leader Jeremy Corbyn. The ruckus had to do with his initial call to come up with some evidence that the Russians poisoned Skripal before finding them guilty, or something like that. Anyhow I did have to stand on my head to figure out why the water coming out of the washing machine was green.

At the disposal of Kommersant was a presentation, which representatives of foreign embassies received at a briefing at the British Embassy in Moscow on March 22. In it, the representatives of official London described their view of the "business of Skripal", and it was she, according to the US Ambassador to Russia John Huntsman, prompted the British allies in solidarity to send Russian diplomats. Basically, the presentation repeats the theses of London, which have already been expressed, but with one important exception: Russia out of the category "with a high degree of probability" guilty of poisoning the defector has been transferred to the category of "guilty without the slightest doubt".

The presentation that was available to Kommersant ( .pdf ), which was was shown and distributed in print to 80 high-ranking representatives of foreign embassies on March 22, four days before the mass expulsion of Russian diplomats. Recall, on March 21, the Russian Foreign Ministry also held a briefing on the "Skripal case" for foreign diplomats - it was conducted by the Director of the Department for Nonproliferation and Arms Control Vladimir Ermakov ( see "Kommersant" on March 22 ). The British Ambassador to Moscow, Laurie Bristow, did not come to Smolenskaya Square (a lower-level diplomat attended the briefing). But the next day he held a presentation for his foreign diplomatic corps in his residence.
One of the participants in the British briefing, US Ambassador to Russia John Huntsman, in an interview with Kommersant on March 26 said that the position of London presented in the presentation seemed "very convincing" to him. "They (the British.-  Kommersant ) have prepared a very qualitative and convincing review of this incident, comparing it with similar cases that occurred in the past," the ambassador added. Press Secretary of the Russian Foreign Ministry Maria Zakharova on her page in page complained that the presentation "is not being passed on to the Russian side and is not being made public." According to her, "at the moment, nothing has been sent from London to Russia regarding what happened."

The presentation consisted of six slides (counting the title, containing the date and the inscription "Incident in Salisbury") and accompanied by an expanded oral commentary from the British Ambassador.
he second slide sets out the chronology of the incident in the period from March 4 (admission to the hospital of the former double agent Sergei Skripal, his daughter and local police officer) until March 20, when "23 unregistered Russian intelligence officers were expelled from the UK." A map with the scene of the incident in the British town of Salisbury is attached to the side: the house of Sergei Skripal, the Zizzi restaurant, the shopping center and the Bishop's Mill pub.
The third slide, entitled "A New Phase of Russian Aggression," contains a description of the Novice poison agent, which was recognized by the military chemical laboratory of Porton Down, not far from Salisbury. The presentation affirms that the application of the "Novice" is "the first use of chemical weapons in Europe since the Second World War" and "violation of the ban imposed by the Convention on the Prohibition of Chemical Weapons". "Without any doubt, Russia is responsible," the document reads. "No other country had the same opportunities, intentions and motives (in order to do this.  " "Kommersant"). There is no credible alternative explanation. " Until the end of last week, recall, British Prime Minister Teresa May publicly confined to statements that Russia is "highly likely" involved in the attack.
The presentation also indicates that Russia has not provided the UK with conclusive evidence of its non-involvement in the incident. Instead, "by March 18, we (the British authorities.-  " Kommersant " ) counted about 30 parallel attempts at disinformation," the document says.
The fourth slide describes the impact of the "Novice" on the human body and gives statistics of the victims and the incident involved in the investigation. "51 people were examined in the hospital, 131 people could potentially be in contact with the poisonous substance," the authors of the presentation write. "The investigation involves 250 employees of anti-terrorist units and 180 military personnel." Side effects of the "Novice" are listed: convulsions, loss of consciousness, coma, slow heartbeat, nausea, diarrhea, excessive sweating, etc. "Death can arise from suffocation or cardiac arrest," the British embassy concluded.
The fifth slide is entitled "A Long List of Russia's Hostile Actions" and includes 12 blocks describing incidents that London classifies as such. The first of them is "the murder in November 2006 of Alexander Litvinenko," another Russian defector who died of polonium poisoning. Next are "DDoS attacks on the Internet Estonia" in 2007, "invasion of Georgia", "the occupation of the Crimea", "destabilization of Ukraine", shot down over the Donbass "Boeing" MH-17, "breaking the Bundestag", "interference in elections in USA "," an attempt to organize a coup in Montenegro "," cyberattack to the Danish Ministry of Defense "and" attack using a virus-extortioner NotPetya ". This series is crowned by the "poisoning of Sergei and Yulia Skripal" in March 2018.
Finally, the last slide talks about the measures that the British government took as a result of the above. Among them - "direct indication of Russia's responsibility", "dismantling of the Russian intelligence network in the UK", "freezing all planned bilateral contacts", "strengthening border control", "combating crime and corruption", "adoption of new laws" and "other measures to counter the hostile state ".
The presentation was published on the website of Kommersant. It does not report practically any new information compared to what was previously provided by the British authorities. The only difference is the re-qualification of Moscow's status from "with a high probability" of the guilty party to the guilty "without the slightest doubt." At the briefing, British Ambassador Laurie Bristow said that "the principle of Russia's actions is to disentangle, mislead and sow doubt." "In the coming months, your support in taking measures to ensure the security of every person and our common international security will be of key importance," he said to the crowd. "We must show Russia that it must be held accountable for what happened ".
Over the past two days, 25 countries, as well as NATO, have announced the expulsion of Russian diplomats after Great Britain.
Mikhail Korostikov
[END REPORT]