Evacuation efforts were “difficult, to say the least,” said Lt. Al Smith of the Butte County Sheriff’s Office, noting that several deputies who ventured into evacuation zones to rescue residents also became trapped by flames burning around them. “I can’t think of an area that’s safe right now.”
[...]
Firefighters spent the morning trying to evacuate trapped Paradise residents while creating firebreaks within the town and even moving some people to empty parking lots.
“In the past few years, just the way fires have moved, firefighters have had to help with evacuations before they can go back in to put out the fire,” said Lynne Tolmachoff, a spokeswoman with the state Department of Forestry and Fire Protection, or Cal Fire.

Twitter users are saying smoke from the Camp Fire has reached San Francisco and other Bay Area cities. Photos show the smoke beginning to obscure the Golden Gate Bridge.
UPDATE 6:25 PM
Good grief. The fire is now covering 18,00 acres; it was 8,000 a couple hours ago. I've just added more updates from the Chico Enterprise-Record report, below. This situation is getting more serious by the minute. From the Sputnik report, resources are spread thin -- "resources" meaning help with evacuations.  One problem with evacuation is simply gridlock; vehicles leaving the town are end-to-end. The following photo was taken earlier in the day, and even then traffic was heavy. At least one roadway had to be blocked off because of the fire.
END UPDATE 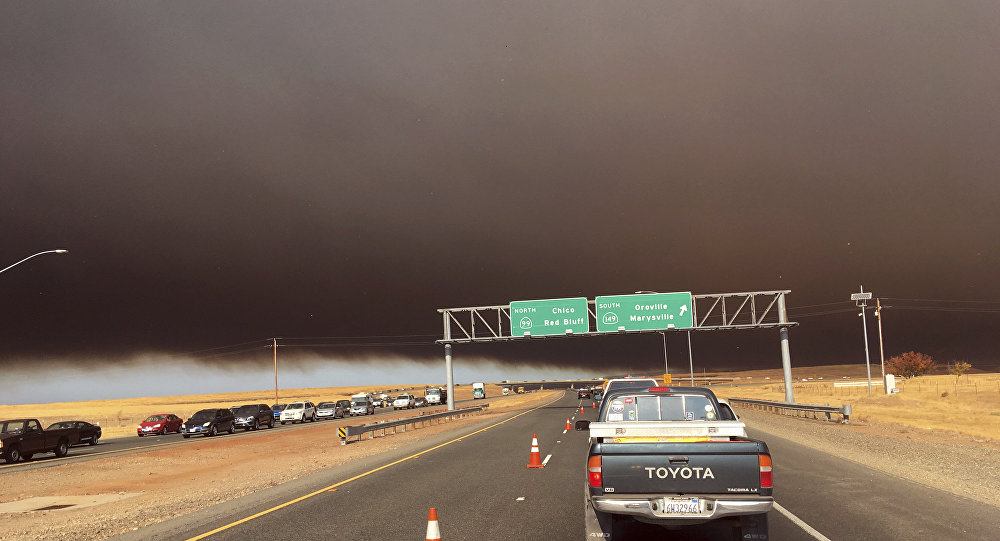 Talk about a metaphor. But this is California, where fire season is now year round.  27,000 people in the town of Paradise had to evacuate because a wildfire in Butte County, officially (and confusingly) named the Camp Fire, exploded into a fast-moving conflagration. Photos/video of the onrushing fire are apocalyptic. I took the one above from Sputnik, which also posts videos of evacuees trying to outpace the fire in their vehicles with varying degrees of success; some Paradise evacuees have had to abandon their vehicles and flee on foot. But so far no deaths that I know about although there have been scores of 'injuries.'

Below are the latest updates and first report on the fire from a local paper (AP and the San Francisco Chronicle, which Sputnik quoted, are also closely watching the fire.) But first some background from Sputnik's summary of other reports:

A raging wildfire in Northern California has forced the 27,000 residents of the city of Paradise to flee. Dramatic footage shows flames closing in around the highways out of town and thick smoke hanging in the sky, obscuring the horizon.

Butte County Sheriff Kory Honea called it a "very dangerous and serious situation," AP reports, and noted that some residents have been forced to abandon their vehicles to escape the conflagration.

[...]
Paradise sits in the foothills of the Sierra Nevada mountain range, near the larger town of Chico and about 75 miles north of the state capital of Sacramento. However, on Thursday the place is very far from paradise: a rapidly growing wildfire encompassing 6,000 acres [at last count 8,000 acres] is closing in on the town, forcing its residents to drop everything and evacuate, the San Francisco Chronicle reported.
[...]
​Cal Fire, the state's agency responsible for managing the region's chronic wildfires, reported that the blaze has been dubbed the "Camp Fire," a humorously serendipitous name that comes from its place of origin: the area of Camp Creek Road and Pulga Road near Highway 70 in the Feather River Canyon, to the east of town. At least one young resident was confused by the name.
[...]

​Honea says resources are spread thin, but officials are "doing everything we can to get people out of the affected areas."

[see site for video and 26 photos]

UPDATE: 3:40 p.m.
Twitter users are saying smoke from the Camp Fire has reached San Francisco and other Bay Area cities.
Photos show the smoke beginning to obscure the Golden Gate Bridge.
A north wind is blowing the smoke south from Paradise.
UPDATE: 3:30 p.m.
A woman who evacuated due to the Camp Fire told The Associated Press that people abandoned their vehicles to flee the blaze and held babies and pets as they escaped.
Gina Oviedo said there were flames everywhere as she got out of Paradise.


Oviedo described a devastating scene, saying homes were engulfed in flames and utility poles were crashing down. She said people left their vehicles and ran when they started hearing explosions.

UPDATE: 3:07 p.m.
A spokeswoman for the Adventist Health Feather River Hospital in Paradise told The Associated Press that 20 patients had to go back to the facility after evacuating because of gridlocked traffic.
Hospital spokeswoman Jill Kinney said clinics and other outbuildings were on fire or had been damaged, but the main hospital was untouched.
At least 27,000 people in Paradise have been ordered to flee.
UPDATE: 3 p.m.
Acting California Gov. Gavin Newsom has declared a state of emergency due to the Camp Fire, according to The Associated Press.
Newsom issued the declaration for Butte County as the fast-moving fire continues to burn around the town of Paradise, about 15 miles from Chico.
Newsom is filling in as governor while Gov. Jerry Brown is out of the state.
UPDATE: 2:58 p.m.
Enloe Medical Center in Chico reports that the number of patients who have been transferred to Enloe from Adventist Health Feather River in Paradise has risen to 35, said Natali Munoz-Moore, Enloe’s digital media specialist. She did not have information on their conditions.
UPDATE: 2:45 p.m.
150 people are huddled in a commercial building in Paradise, hoping for rescue, according to a tweet by Chico Enterprise-Record Editor David Little.
UPDATE: 2:37 p.m.
The fire is now 18,000 acres, Cal Fire is reporting.
UPDATE, 2:35 p.m.
A new evacuation order has been called for the Nimshew Road area.
UPDATE, 2:25 p.m.


Evacuee Sherri Pritchard said a neighbor told her that her yard was on fire, so she's certain her house is gone by now.
UPDATE: 1:50 p.m.
New evacuations are being ordered in the lower Clark and lower Skyway areas, the Butte County Sheriff's Office announced this afternoon.
Meanwhile, the Redding Police Department announced it was sending eight officers to help handle the Camp Fire.
UPDATE, 1:45 p.m.
Tyler Holmer and his family were hanging out in the Chico mall's parking lot today after evacuating from their Paradise home.
Holmer said he got up this morning to go to school and saw flames on a ridge in the distance.
Then the Camp Fire grew out of control.
"The whole other side was on fire when we woke up this morning," Holmer said. "The sky was orange and raining ash."
Read More: There have been 38,000 wildfires in California this year. Here's how to prepare for an evacuation.
UPDATE: 1:20 p.m.
The fire is now 8,000 acres, according to the California Department of Forestry and Fire Protection.
UPDATE, 1:17 p.m.
Enloe Medical Center in Chico had received 24 patients as of 10:57 a.m. on Thursday. Those patients had been transferred from Adventist Health Feather River in Paradise, said Natali Munoz-Moore, Enloe’s digital media specialist. She did not have information on the condition of the patients, or their injuries.

Other hospitals have offered to assist Enloe, she said, “but we not actively seeking it out.”
A note on the Adventist Health Feather River website says: “Our thoughts and prayers go out to everyone in our community during this challenging time. Due to the current Camp Fire, Adventist Health Feather River is closed. All patients have been safely evacuated and transported to Oroville Hospital or Enloe Medical Center.”
UPDATE, 1:10 p.m.
Highway 99 is now closed as far north as Corning in Tehama County, Caltrans announced on Twitter. The newest closure starts at 99 and South Avenue.
UPDATE, 12:40 p.m.
Highway 99 in the area of the fire is now closed, Caltrans announced on Twitter this afternoon. The closure is from the junction of Highway 32 to Highway 149.
UPDATE, 11:55 a.m.
Minutes after their previous evacuation order, the Butte County Sheriff's Office has issued even more evacuations, this time for those living near Highway 70 and Concow Road on both sides of the road, including all of Yankee Hill.
UPDATE, 11:50 a.m.
The Butte County Sheriff's Office has ordered new evacuations from the intersection of Pentz Road and Highway 70 south to Highway 149.
[...]