"Water Scarcity a Bigger Threat Than the Taliban in Afghanistan?"

"Access to water is not the same as availability of water."

Water Scarcity a Bigger Threat Than the Taliban in Afghanistan?
Water scarcity — not war — is a rising cause for displacement in Afghanistan.
By Soraya Parwani
October 10, 2018
The Diplomat


The Panj river in Wakhan between Afghanistan and Tajikistan 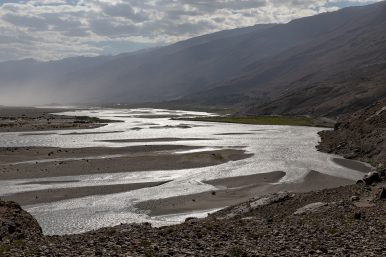 Image Credit: Flickr / ninara
The United Nations has stated that water scarcity — not war — is a rising cause for displacement in Afghanistan. There are 1.5 million Afghans, approximately 4 percent of the population, that are displaced and 448,000 were added in 2017 alone. The U.S. Geological Survey has stated that the groundwater level has, on average, declined by 1.4 mm between 2004-2012, and 22 of Afghanistan’s 34 provinces are facing drought today. According to the United Nations Mission in Afghanistan (UNAMA), only 27 percent of the Afghan population has access to safe drinking water and 37 percent use sanitation facilities.
Water Scarcity or Crisis?
There are very real ground realities indicating water scarcity; however, in aggregate terms, Afghanistan has an adequate amount of water. There are approximately five major river basins in the state — Amu Darya, Harirud-Murghab, Helmand, Kabul, and Northern — and altogether these are estimated to provide 75 billion cubic meters (BCM) of accessible water. According to Cooperation for Peace and Unity, this averages out to 3,063.1 cubic meters per capita. Furthermore, the Afghanistan National Development Strategy has listed the present usage as 19.08 BCM — which is merely 33 percent of total surface water.
Access to water is not the same as availability of water. The only basin in which 100 percent of water is presently being used is the Northern basin; all others are using less than 60 percent of total available water. Among the drought affected provinces, Bamyan, Daykundi, Ghor, Helmand, Kandahar, Jawzjan, Nangarhar, Nimroz, Nuristan, Takhar, Badghis and Uruzgan have been reported as critical priority for nutrition and water sanitation, and hygiene assistance. The issue of water scarcity is not evenly felt across the state, as geographical constraints provide different realities for people in different areas. The water crisis is further complicated due to seasonal time scale and spatial distribution of water sources. Therefore, Afghanistan is not necessarily naturally water stressed — it is facing a water crisis that has been exacerbated by the mismanagement of its available water supply.

Mismanagement, Climate Change and Geopolitics
The United Nations in 2006 stated that the water crisis is not due to a physical absence of freshwater, rather the mismanagement and lack of investment in water supplies. Three decades of war destroyed much of the water management system that existed in the country. However, with the assistance of the international community, Afghanistan has been rebuilding these systems. The international community providing assistance has primarily focused on rehabilitating and rejuvenating old water networks and systems that were destroyed. However, the World Bank cited that the investment and programs for the Agricultural and Water sector has had modest impact on the “rural economy and improving rural livelihoods.”
The Ministry of Water and Energy reports that 90 percent of total water consumption in the country is for agricultural purposes, which sees more than 50 percent water loss due to inefficient systems of water management — mainly unsustainable irrigation for crop production. There are formal and informal irrigation systems in Afghanistan. The formal systems are large-scale irrigation schemes developed with the assistance of the central government in financing, management, operations, and maintenance. However, 88 percent of the total irrigated area is still done through informal systems of irrigation, which are centuries old and traditionally developed to address water management locally. In informal systems, water management is monitored and administered by traditional water masters called Mirabs. Farmers meet with the local Mirab for a number of different purposes, including discussing irrigation plans as well as resolving disputes — in some cases the Mirabs physically open and close the channels for irrigation.
The Ministry of Water and Energy blames most of Afghanistan’s water crisis on its “vulnerability” to climate change, citing a 62 percent drop in rainwater. Higher average temperatures are also increasing the amount of snowmelt from the mountains earlier in the year. A lack of infrastructure will result in this snowmelt being lost as runoff rather than being stored in reservoirs. With 8 million Afghans currently facing food insecurity, this number will drastically increase with the drought aggregating the food deficit in 2018. Afghanistan is also considered one of the world’s most prone areas to desertification, which is the rising cause of natural disasters such as droughts, floods, soil erosion and landslides.
Furthermore, water is not a national resource — it is a transboundary resource that extends beyond political borders. Afghanistan is not the only state in the region facing shortages of water. Iran, Pakistan, and other neighboring states are also facing water shortages. Therefore, as Afghanistan begins to invest in the management of its water supply by constructing dams, irrigation systems, diversions and other infrastructure at a larger scale, it will alter hydrological relations with neighboring states. Currently, Afghanistan only has one agreement with Iran that was signed in 1973, which outlines the allocation of discharge from Helmand river to Iran year round.
The United States 2011 Water Scarcity report stated that “the U.S. approach could exacerbate regional tensions” if the interconnectivity of water issues between Central and South Asian states is neglected. Thus, the management of water requires a national policy that ensures the most efficient usage and sustainable extraction of water, within a larger international framework that has been negotiated with neighbouring states. It is absolutely essential for the Afghan government to engage in bilateral and multilateral negotiations, through a process known as hydrodiplomacy, which it has been largely absent from. Without this vital process, infrastructure development will be faced with strict obstruction.
Soraya Parwani is the Vice President of Communication at the Asia Pacific Foundations youth council.
[END REPORT]
Posted by Pundita at 11/22/2018 02:23:00 AM