What destroyed Paradise was basically a high wind event. But how, in a heavily forested area?

With reports I'd posted years ago about destruction to California's forests kicking around in the back of my brain, it wasn't long before I began to sense there was something odd about the tragedy in Paradise. Yes, the town was virtually destroyed by wildfire but one pushed along by sustained "howling winds" as AccuWeather put it -- the infamous Diablo winds, called Santa Ana winds farther to California's south.

But did idiots build Paradise? Else why locate a town on a ridge in a wind tunnel? The answer is that a wind tunnel didn't run through Paradise back in the 1800s. The massive forests in the Sierra Nevada foothills would have braked the Diablo winds back then. Here:

Windbreaks are barriers used to reduce and redirect wind. They usually consist of trees and shrubs but also may be perennial or annual crops and grasses, fences, or other materials. The reduction in wind speed behind a windbreak modifies the environmental conditions or microclimate in this sheltered zone.
-- University of Nebraska, "How Windbreaks Work"

The severe drag-friction over forests absorbs energy and slows down winds.

Okay, there were wind driven wildfire in the region but because of the massive forests I don't think these could have been sustained at high velocity. One doesn't have to search more than a minute on the internet to get on the path of learning what happened to those massive forests. Here are three reports out of a large number:
Pot Growers Destroying National Forests (2011, Live Science)
California’s Forests: Where Have All the Big Trees Gone? (2015, National Geographic)

Nobody contests that huge swaths of forest in the Sierra Nevada and other regions in the USA have been destroyed although agreement pretty much ends there, as people line up to argue over reasons for the destruction and what to do about it.

Some arguments are quite precious. One report says that lack of water caused by climate change contributes to forest destruction in many cases. Take a look at this photo from the Live Science report. Does it look like climate change to you?

That's a California National Guardsmen and volunteers  preparing "some of the 300 miles of irrigation line removed from marijuana-growing gardens to be airlifted out" of the forest after a marijuana grow operation was busted.

Diversion of water, draining streams and creeks dry, and poisoning of water sources had been going on a long time in pot agriculture. But after 2008 these were no longer Mom& Pop pot growers; these were industrial-scale grows in California forests overseen by Mexican drug cartels. They ran the grow sites like a military operation using virtual slave labor from Mexico and Central American countries. As soon as the Forest Service found one grow, a cartel set up in another part of a national forest. As to how much forest they destroyed -- I've never seen a statistic but the destruction was "massive" according to one report I saw in 2012.

If you want to know more about the situation you can start by reading my 2015 post Dope, Deforestation, and Desertification but to cut a long story, although there are several reasons for water droughts and other factors that have led to deforestation in California's north, the punchline is the Diablo winds no longer have a big opponent. This has set up a vicious cycle in which the more strongly the winds blow, the more forests dry out, leading to more deforestation, leading to even less windbreaks, leading to even more drying of the forest and surrounding areas.

And so it goes in a steadily worsening cycle until an entire microclimate has been radically altered, as happened in northern California -- and surely at points farther south in the state. Take a look at this chart from the Fire Weather Research Laboratory, which shows by month the frequency of the Diablo winds. Notice anything a little startling about the chart? 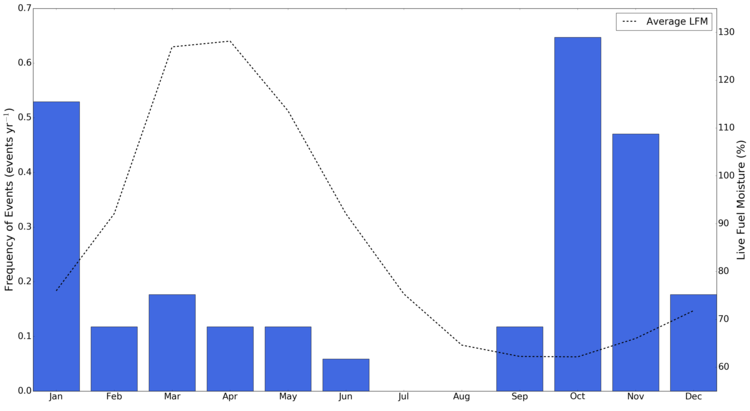 That's right; the only time the winds die down is during July and August. So why do we keep hearing, every time there's a big wildfire in California, 'This happened during the annual Diablo [or Santa Ana] winds.' Annual? Maybe at one time, but they're a near-constant feature of California weather. And the more those winds blow the drier it gets, and they can turn dank vegetation from heavy rainfall into tinder faster than you can say hiss cat.

As to what all this has to do with climate change -- well it is climate change, just not the type California's Governor Jerry Brown had in mind when he as much accused the entire human race of contributing to California's killer wildfire seasons. Not to dismiss the idea that excess manmade greenhouse gases are harmful, but I look at it this way: Because the United States can't conquer China and India to make them shut down their coal-fired plants, the idea is to develop offsets.

There is plenty that Californians can do to improve their microclimates, and it starts with repairing the severely damaged microclimate in the state's north. This is doable; yes, even given much loss of the best windbreaks -- large numbers of big trees. Granted it's not doable without financial pain because man-made windbreaks on a large scale don't come cheap. But it's less pain than living in cities where officials have to pass out smoke masks every time high winds take wildfires on a joyride during a dry season. It's less pain than what happened to the people in Paradise.

Californians among Pundita readers could also study the article by Douglas Sheil that I linked to above. It discusses a model of how the climate works that differs considerably from the one accepted by the majority of climate scientists -- and by Governor Brown.