American Pharoah  After Winning the Belmont Stakes
“The way he hit the ground, you couldn’t even feel how fast he was moving” 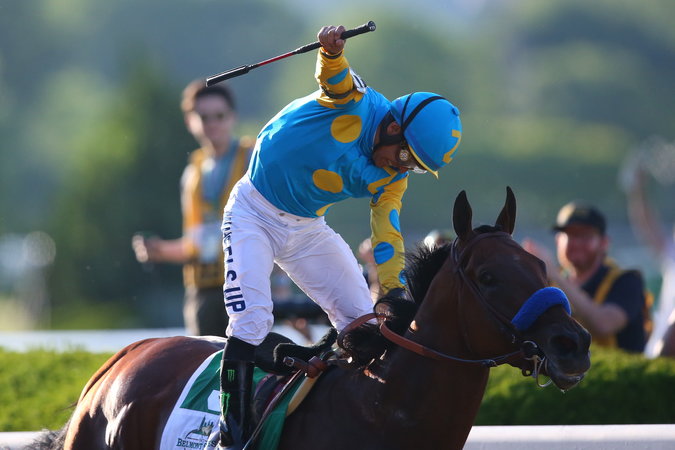 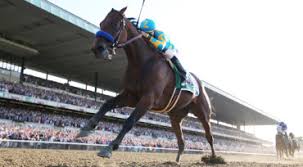 "A very special horse; the horse won, not me" -- American Pharoah's trainer on NBC News, station that broadcase the Belmon Stakes race..

This is the stuff of dreams. What a proud moment for sports.

American Pharoah was victorious at the 147th Belmont Stakes Saturday, becoming the first horse in 37 years to win the Triple Crown.

American Pharoah bested the fields at both the Kentucky Derby and thePreakness, but the 1 1/2 mile run at Belmont had knocked 13 horses off track in their bid for the Triple Crown since the feat was last accomplished by Affirmed in 1978. American Pharoah is only the 12th horse to win the Triple Crown.
The promising 3-year-old horse was the favorite in the race, but faced some challenges. He conquered the race against seven rested horses that had sat out at least one of the Triple Crown races over the past five weeks.
The distance was longer than in the other two races — the Kentucky Derby track is 1 1/4 mile and the Preakness track is 1 3/16 mile.
Rain early in the day in Elmont, New York, also made the sandy track even softer, but American Pharoah proved at both the Preakness and Kentucky Derby that he can deftly handle a soggy course.
The sold out race was witnessed by 90,000 — the fortunate who nabbed tickets in case history was made and now, will forever be able to say they were there.
The Preakness brought American Pharoah's winning streak to six, and Saturday's rare achievement made seven. Owner Ahmed Zayat, who is involved in a number of legal disputes, adds $800,000 to his fortune.
Hall of Fame trainer Bob Baffert and jockey Victor Espinoza will also be celebrated for decades — but likely not as much as American Pharoah, whose name will forever be associated with an elite group of colts that captured the elusive Triple Crown.
[End Report]


American Pharoah, the flashy colt with the smooth stride, won theBelmont Stakes on Saturday, becoming the first Triple Crown winner in a generation and etching himself in the history books.
Since 1978, when Affirmed swept the three races, 13 horses had won the Kentucky Derby and Preakness. But none of them won the Belmont.
On Saturday, American Pharoah broke that 37-year jinx. He now enters the pantheon as the 12th Triple Crown winner, joining Sir Barton (1919), Gallant Fox (1930), Omaha (1935), War Admiral (1937), Whirlaway (1941), Count Fleet (1943), Assault (1946), Citation (1948), Secretariat (1973), Seattle Slew (1977) and Affirmed (1978).
American Pharoah broke from the No. 5 gate, went right to the lead and led the whole way, pulling away in the stretch for the victory. He finished the mile and a half in 2:26.65. Frosted was second, five and a half lengths back, and Keen Ice third. American Pharoah paid $3.50 for a $2 bet as the favorite.

“The way he hit the ground, you couldn’t even feel how fast he was moving,” jockey Victor Espinoza told NBC.

“I’m very emotional,” said the trainer Bob Baffert. “I’m thinking about my parents. I wish they were alive to see this.”
“New Yorkers, all racing fans, this is for you,” said owner Ahmed Zayat as he hoisted the Belmont trophy.
The field of eight on Saturday was the smallest since 2007, when the filly Rags to Riches prevailed in a seven-horse field. But American Pharoah did defeat 31 challengers in his Triple Crown sweep, second only to War Admiral, who outran 32 in 1937.
Baffert, 62, secured his second Belmont victory; when he won in 2001 with Point Given, Bill and Hillary Clinton joined him in the winner’s circle. (Bill Clinton was on hand again Saturday.) American Pharoah was able to give him what his three previous Derby and Preakness winners — Silver Charm (1997), Real Quiet (1998) and War Emblem (2002) — could not.
“I just know, we’re up against it, but we’re hoping it happens, but I really don’t try to think, because the letdown, I know what it’s like,” Baffert said last week. “Those other races, we were right there, it was so close, they ran their races, they just got beat. It all ends, the phone quits ringing, it all ends. It’s like life ends. So we’re just going to enjoy it and keep the horse happy and healthy. That’s all we can do.”
Espinoza, 43, secured his first Belmont victory, having come up short with the Derby and Preakness winners War Emblem and California Chrome.
[...]