The lid blew almost a month ago but for some strange reason this didn't make news in the United States. Moving along,


"What I'm selling," a Pakistani smuggler in Italy told [Italian journalist Giampaolo Musumeci] "is the dream of Europe."

The quote is from BBC's May 13 report, The Facebook smugglers selling the dream of Europe by Daniel Adamson and Mamdouh Akbiek.  It's a highly informative 'must read' report but I'm not sure Adamson and Akbiek,  -- or Musumeci -- fully understand the phenomenon they investigated.

So this isn't only black globalization; e.g., globalized illegal activities such as drug smuggling and human trafficking. This is using business and marketing expertise to normalize human trafficking.  It's also making a market. Yet Musumeci persists in viewing the situation as a crisis in foreign relations:


New EU proposals to distribute migrants across member states and break up clandestine networks might help to reduce people smuggling within Europe. But Musumeci says it will do nothing to stop the boats coming across the Mediterranean. Dealing with that, he argues, will require a whole new level of engagement with the political turmoil in parts of Africa and the Middle East.

"Migration is going to force us to deal with these international issues… We need to focus on Libya, Eritrea, Somalia, Syria. It may sound naive, but it's the only way to stop the influx … We'll never stop this just by closing the doors. I've talked to dozens of migrants, and these people are willing to die to get into Europe."

But how many of these people would be willing to undertake the journey if hadn't been sold to them? As the Beeb report makes clear these smugglees have no intention of risking death; it's just that they are victims of slick marketing campaigns launched by scoundrels.

And when last I checked Bangladesh wasn't in Africa or the Middle East. . Yet many of the refugees coming through Libya are Bangladeshis seeking employment,,or better employment, in Europe. As to how they know how to get to Libya and where to go to join up with a smuggling expedition -- the BBC report goes a long way to answering the questions.

In short, they're learning how to do it from social media, including Facebook. They get sold on the idea that all they have to do was show up, and all the details would be handled for them.

This is not an ad from a travel brochure. It's a Facebook update posted by a people smuggler, Abdul Aziz, from the Libyan port of Zuwara on 21 April. Abdul Aziz is just one of hundreds of smugglers now using social media to promote their services to migrants and refugees trying to reach Europe.

Their pages advertise everything from fake documents to safe passage by land, air, or sea. Many are illustrated with photos of luxury cruise liners or crisp new passports, and include package deals -- "Kids go free" is a popular offer -- as well as glowing testimonies that purport to be from migrants who have made the journey.

But these actually are travel ads:


Screenshot of a Facebook page showing a child on the wing of a plane.  [The text reads] via Skype   "Travel safely from Ataturk Airport in Istanbul direct to Europe, England, Canada, Australia, America, Libya and Egypt." As is often the case, smugglers used this picture without the permission of its owner, Caras Ionut. 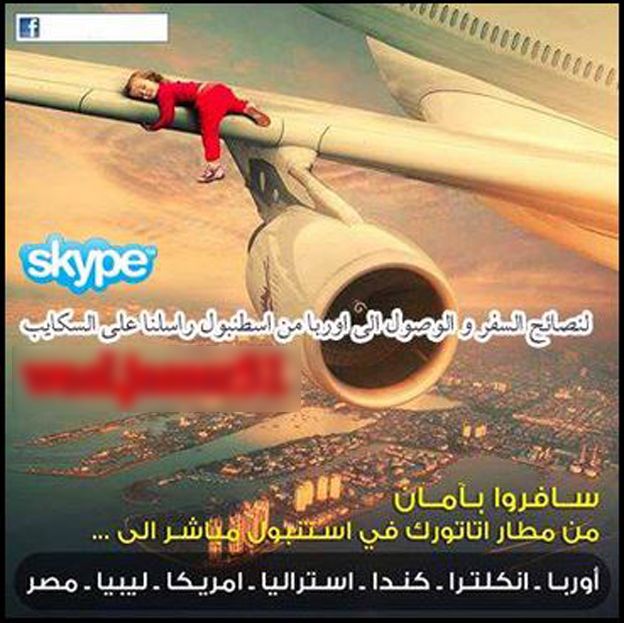 So I can't agree with the BBC reporters that "people smugglers are responding to a demand for asylum that Europe's politicians are unwilling to meet." Obviously, the smugglers are creating a demand.  They are persuading people to emigrate.

And they're using social media tools to help them do it:


Abdul Aziz, who spoke to the BBC via Skype, said that between 10 and 20 people contact him through his Facebook page every day. "Until 2012 we didn't use social media at all," he said. "Now, it accounts for between 30% and 40% of my business."

This doesn't mean there aren't people who would be refugees under any circumstances and are genuinely willing to die to escape intolerable conditions. It does mean that it's conflating two very different issues to view the situation in political terms.

It's the same with Ann Marlowe's remark to John Batchelor on Friday night during discussion of her June 2 report for The Daily Beast Behind the Mediterranean Migrant 'Crisis.'

She said that one should be asking why conditions are so bad in these countries that so many of the citizens want to leave.  As she expressed it for the Daily Beast:


Of course, all of this raises the question of why tens of thousands of Africans think it is worth a more than 4 percent risk of death to escape their home countries, and why the world won’t pressure governments like Eritrea’s -- the single largest source of migrants as of the end of April -- as well as those of Ethiopia, Somalia, Nigeria and Gambia, to improve conditions. Not to mention Syria. But it’s easier for the EU and UN to pretend that the citizens of these tyrannical, corrupt, or failed states have a right to become citizens of the EU than to deal with their rights under the UN Charter to have a decent, free life in their home countries.

Oh, snap!  Just roll the UN Charter up to the borders and tell those governments to get their act together.

Marlowe also mentioned (during her discussion with Batchelor) that smugglers have developed a route from Libya all the way to South America, where the smugglees are then transported up through Latin American countries to across the Mexican border and into the USA.

(As to how many smugglees actually survive that route -- that's a good question.)

So is she proposing that the International Community also wave the UN Charter at Brazil and the other LatAm countries through which Libya-based smuggling crews work?

Again, it's mixing apples and oranges to view the emigre waves as a sign of failed states.  The countries Ann lists, and Bangladesh, have been in bad shape for a long time.  But it's not country conditions that have created the waves, it's salesmanship and know-how.

As the insane Libya-US smuggling route illustrates, the smugglers aren't just selling a dream of Europe. They're selling a dream of easy migration to a better life anywhere. So these consumers are marks or pigeons in the parlance of professional scammers.  And many of the marks are financially well off, as the Beeb report indicates:

This Facebook page offers British visas to Syrians: "Single entry 90 days USD $7,000... Pay when you collect the passport with the visa. For serious people only."

"To everyone asking about the way and the price. Travelling straight to Europe by plane costs between 4,000 and 8,000 euros. If you only want a passport and pay for the plane ticket yourself, and you take the consequences, then the price is 4,000 euro for a 100% genuine passport belonging to someone who looks like you. But if you want to pay after arriving in Europe, the price is 8,000 euro and we will pay for everything and take all the risk. Just send your picture and your number via Facebook message so we can find a passport belonging to someone who looks like you, and then we will call you."

"For those wishing to travel to Europe: we have a ship carrying grain, 60m long, departing from Turkey to Italy. The journey takes between four and six days. Food and drinks are available."

As to what EU law enforcement is doing about the situation:


Despite the obvious difficulties, European countries are still trying to solve the problem at the level of policing. Europol, the EU's law enforcement agency, recently launched an intelligence program, JOT Mare, which is supposed to disrupt or dismantle the smuggling networks that are bringing so many migrants across the Mediterranean.

A spokesperson for Europol confirmed that their agents will look at the online presence of the smugglers: "JOT Mare is focussing on all modi operandi used by facilitators of irregular migration in the Mediterranean Sea, including the use of social media."

He conceded, though, that "Europol has no operational cooperation agreement with Libya" - the point of departure for the vast majority of migrants.

This has caused the Libya-based smugglers to thumb their noses at attempts to catch them. (See the Beeb report for details.)  So what to do?

First, the report suggests to me that officials at Turkey's international airports are involved in the smuggling up to their eyeballs.  So while the EU doesn't have an operational agreement with Libya, it most certainly does with Turkey -- and given that Turkey is a NATO member, that's an additional layer of operational agreement.

Unless you want to speculate it's just because Turkey is a NATO member that EU officials have been reluctant to hold Turkey's airports to account. In that event an approach would be EU leaders having frank discussions within earshot of the international press about Turkey's transit problem -- and make judicious use of  'leaking' if they don't want to speak with that much frankness in front of a microphone.

Second, I don't think Facebook is a Libyan company.  Facebook CEO Mark Zuckerberg has built a career on presenting himself as a 'people person' and champion of human rights. So ask him if there's anything he can do, out of the goodness of his heart, to discourage the smugglers from using Facebook.

Third, the police and intelligence agencies need to turn the tables on the smugglers.  The idea would be to de-normalize the smuggling and use social media to do this.

Set up accounts on social media sites that are designed to attract people looking for smugglers and post horror stories and videos of smugglees drowning. Explain that customers are being robbed blind by the smugglers.  Stage little plays that are videotaped and posted on YouTube showing smugglers making fun of their victims.  Make fun of the rich smugglees. Make a sharp distinction between a smugglee and a refugee. And so on.

In short, treat the situation for what it is: a highly unethical business that needs to be discredited, but which has generated a stampede not unlike the Yukon Gold Rush and Tulip investment bubbles.

Treat the smugglees less as victims and more for what they are: chumps who're supporting very bad people.

The allover aim of this approach should be to reduce the 'noise' in the refugee system so officials in immigration countries can better gauge the true size of the problem.

My question is whether all leaders in the most affected EU countries truly want to reduce the noise all the time, which leads me to a fourth tactic.

The smugglers mock the attempts by EU governments to stop them but actually the governments have been their best friend because they've been incoherent in response to the smuggling.  It's like the early attempts to deal with Somali pirates. Sometimes governments sent out forces to fight the pirates, sometimes they allowed companies that owned kidnapped ships to pay ransoms.

It wasn't until the International Community heaved itself into a stiff united front and acted with unwavering consistency that the pirates finally understood "no" means no.  More than any other tactic this same coherence, applied to the business of human smuggling, will get results.