Of course Peter denied Jesus three times. That's what Jesus told him to do. 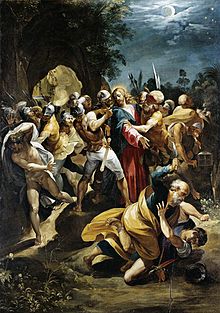 [laughing] O ye of little reasoning ability.  There is no contradiction between Jesus's recognition that Peter knew he was the Messiah and Peter's thrice-repeated denial of knowing Jesus.  During the Last Supper Jesus very specifically told Peter that before the cock crowed three times Peter would deny knowledge of him. Peter protested that he wouldn't do this, but a command from the Messiah is a command.  In spite of himself Peter obeyed the command, even though it went against everything in him.

Why did Jesus give the order?  Who knows?  Maybe it was to save Simon Peter's life during critical moments.  And it does seem Simon Peter had a quick and even blinding temper.  The above painting depicts him striking the High Priests' servant Malchus with a sword in the Garden of Gethsemane.  If he'd turned his temper on the Roman soldiers who came to arrest Jesus he probably would have been killed on the spot.

But here are the limits of the intellect.  To ask why is to ask to understand God's relationship with His devotees.  The answer is a divine mystery.

That's my reply to a reader who asked why Jesus would confer vast authority on a man who was so weak he denied Jesus three times -- even after being told by Jesus that he'd given him the keys to the kingdom and the power to "loose and bind" in heaven as well as on earth?

There is another way to approach the question, one that can lean a little on the historical record.  Note that in the "Rock" dialogue Jesus did not tell Simon Peter that he had given him vast authority. He said "I will give you ..."

When did he confer the authority?  Not known.  However, the Last Supper was just that.  It would be the last time in his corporeal body Jesus would have a chance to instruct his disciples.

From that point of view was it a test, a final test, for Jesus to tell Peter that before the cock crowed three times he'd deny him?

This viewpoint isn't all that far-fetched. Jesus had recognized that Simon was the person God had chosen to establish a teaching lineage -- a 'church.'  But doing would be a monumental task that required much sophistication and leadership experience that Peter, a fisherman by trade, didn't have.
Without such skills, however, Peter could be in a real pickle when he no longer had his teacher to instruct him in person.

In those circumstances he would need the ability to listen very carefully to his intuition, to whatever answers prayer and contemplation brought him -- even if the answers contradicted his experience.  Did he have the ability?  Did he trust that he had the ability?

Jesus surely knew the answer without a test. But did Peter know?  There was one way to find out, wasn't there?  Peter was very nearly destroyed when he realized that he had indeed denied Jesus after swearing he wouldn't.  But another way to see the situation is that by gum, come hell or high water, he did what Jesus said he would do.  Now that is listening carefully to one's teacher.

I realize I'm contesting the accepted interpretation of Jesus's statement; i.e., that he was looking into the future when he told Peter that he'd deny him -- making a clairvoyant prediction about a predestined event.

Which is another way of saying that some room should always be left in interpreting the historical record when a divine mystery is involved.