Kudos to The Nation, a Thai news site that from the looks of it covers regional as well as Thai issues. I've highlighted passages in the following report that contain information about the police investigation I hadn't learned about from other news sources. But before The Nation report, I want to mention a big and important discrepancy in reports filed today by Thai news site Khaosod English and The Washington Post.


At around 2pm today soldiers and policemen arrived at Wanna’s family home [in Phang Nga province] and conducted a search of the property for any suspicious material. No illegal items were found in the search, police said.

Her family members told police she has not been back home for three months.

According to a reporter on the scene in Phang Nga, a police officer told one of the relatives to use the Line chat application to contact Wanna and ask where she was, at which point Wanna allegedly replied that she is in Turkey.


Police Maj. Gen. Chalit Keawyarat said the woman’s relatives told police that she had been away for more than three months and that they thought she was in Turkey because her husband is Turkish.

“The relatives are trying to contact her so that she could prove her innocence to the police. The relatives believe she is not involved,” Chalit said.

I saw the Khaosod English report early this morning (EDT), so maybe The Washington Post reporter(s) -- not credited in the report -- would want to do a little more checking before running with a story from a foreign country. I think there's always a home team advantage but just because of this, American reporters and their editors need to pay very close attention to the local reports berfore filing their own.

As to whether the Post's version might actually be the correct one, there was most definitely a local reporter on the scene. Here is a photograph that Khaosod English obtained of police and military investigators chatting with Wanna's family members:

Thai woman flew out of Phuket in July; bomb materials found in flat she rented, police say; relative claims she will return to deny any role in blasts

THE hunt for those behind the Erawan Shrine bombing two weeks ago has narrowed, with arrest warrants issued for two more suspects - one of them a Thai woman from the South.

However, police have been unable to clearly pinpoint the motive for Bangkok's worst bomb attack. They have come up with the theory that the culprits may have been human smugglers angered by the government's crackdown on the illegal trade, a source familiar with the ongoing investigation said yesterday.

Four arrest warrants have so far been issued in connection with the two blasts - the male shrine bomber seen wearing a yellow shirt and a man in a blue shirt who dropped an explosive device at Sathorn pier. That device exploded the day after the shrine attack but no one was injured.

Meanwhile, police investigators have found footage from closed-circuit TV cameras near Hua Lamphong Railway Station that shows the shrine bomber receiving a backpack similar to one used in the bombing from a man in a white shirt, another police source said.

Min Buri Provincial Court yesterday granted a police request to issue arrest warrants for Phang Nga resident Wanna Suansan, 26, who is also known by the Muslim name Maisaloh, and a man of an unspecified nationality.

Police said Wanna rented an apartment in Min Buri in eastern Bangkok for the man.

A sketch of the unidentified man, who looks to be a foreigner, was issued along with the arrest warrant.

The wanted woman left Thailand on July 1 from Phuket airport for Abu Dhabi in the United Arab Emirates, according to a police source. Video footage showed her with a man who looks like the man in the police sketch. However, there is no immigration record of him leaving Thailand.

Police searched her house in Phang Nga yesterday afternoon. A relative of Wanna at the house said she was in Turkey, the country of her husband.

The relative said Wanna had insisted she was not involved with the blasts and would come back soon to turn herself in to police. [See excerpts from a CNN report, below]

But Prawut said: "We are confident that these two people are in the same group of people responsible for the blasts at the Ratchaprasong intersection and the Sathon pier."

He said more arrest warrants would be issued soon but declined elaborate.

The foreigner of unknown nationality arrested on Saturday at an apartment in Nong Chok is still denying involvement in the blasts, a source said. However, substances found on his clothes were similar to what was used in the bombs.

Police will conduct a DNA test in a bid to confirm his link with the blasts, the source added.

The man, who held a fake Turkish passport, is being detained at the 11th Military Circle in Bangkok's Dusit district, where security has been increased. No media are allowed to take photographs or do video recordings at the agency.

Prawut dismissed a report that police were detaining four Palestinians in connection with the investigation. But he could not confirm or deny they were being detained by the military.

The spokesman said police were conducting searches in many locations but declined to discuss the operation in detail. He urged owners of apartment buildings with foreign tenants to prepare copies of CCTV recordings of the tenants for police examination.

National police chief General Somyot Poompanmuang met Prime Minister Prayut Chan-o-cha at Government House yesterday to report on progress in the investigation. The PM told reporters afterwards that the mass media should avoid making wild speculation about the case or they could further complicate the probe.

In the government's newsletter for September 1 (today), General Prayut wrote: "I and all the Cabinet members promise that we will do the best of our ability to prevent such an incident from happening again. And we will find all the perpetrators to be punished in accordance with the law."

Wanna herself has denied any involvement, according to the police official. She admitted renting an apartment room in Bangkok, though she claimed she gave it up almost a year ago.

The 26-year-old said that she's in Turkey with her baby and husband, who is Turkish, according to Saharat. The police colonel added that he believed Wanna would willingly come back to Thailand and answer authorities questions "if the government would help her come home." 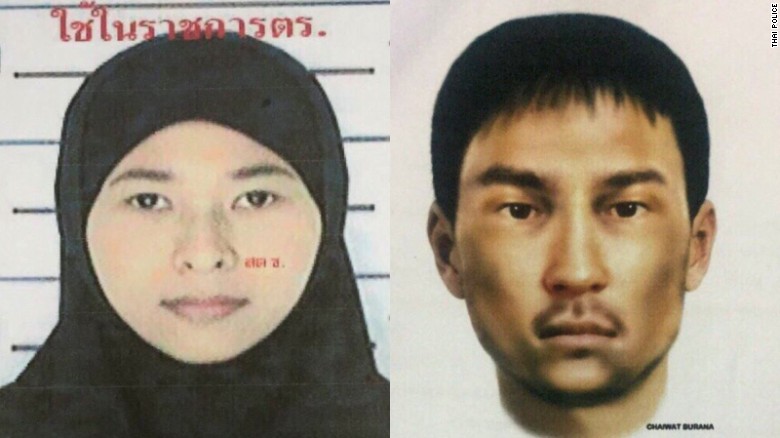