This man is 90 years old? What's his secret?

The photo is at Asia Times to accompany its posting of an August 29 Reuters report, Pressure mounts on Malaysian PM as protests spill into second day.

The man could be in his 60s, but Reuters says he's 90.  Lemme visit Wikipedia just to make sure.  [taptaptaptap]

Yuppers, he's 90; born July 10, 1925.  Wow. That is the most well-preserved 90 year old I've ever seen. He seems to be a perfectly awful man in some respects, from my glance at the Wiki article, but I still want to know what he eats and what face cream he uses. And the name of his plastic surgeon, if he has one.

I wonder if those are his own teeth, too.

The Reuters photo is not a fluke, from a 2007 photo of him at Wikipedia: 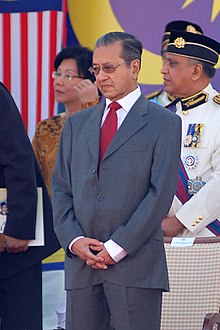 And here's another photo of him at the rally yesterday.  Somehow I don't think he brought a makeup artist with him.

He doesn't seem to be in a wheelchair. As to whether he's using a cane -- the rally photos don't show, but clearly he could stand without one in his early 80s. Look at that posture in the 2007 photo.  And it seems he was standing for quite some time at the Saturday rally.

Well, his surprise attendance at the rally did not make the ethnic Malays happy, at least according to The Malaysian Insider, which posted the above photo. But from what I read at Wiki Dr Mahathir has always been highly controversial. Clearly he's thrived on it.

He is a medical doctor. Maybe he concocted a special nostrum.  All right, Pundita, let's let it go. Now I wonder if he's ever had a sick day in his life. Pundita!