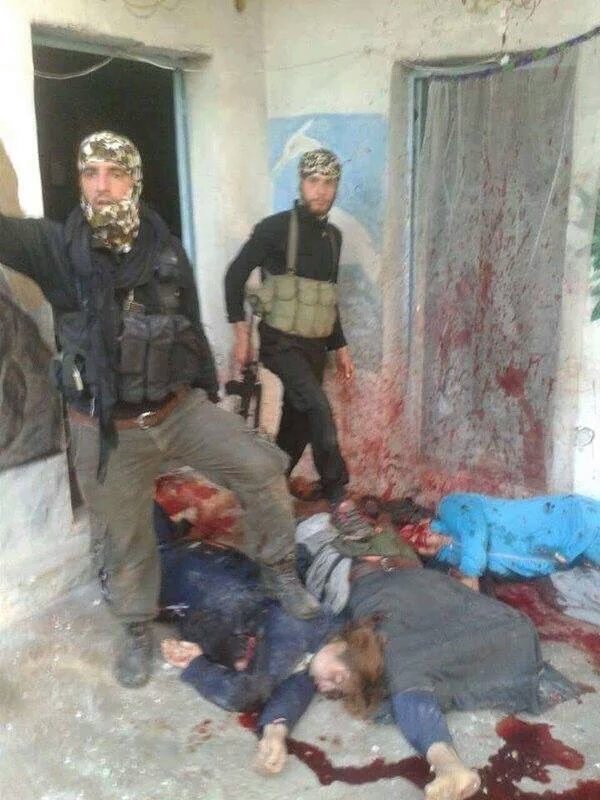 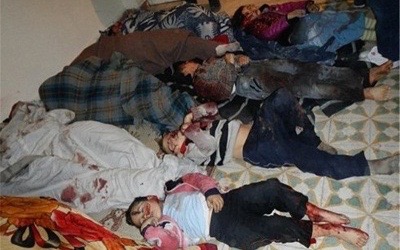 On instructions from my Government, I should like to convey to you information regarding the horrific massacre of peaceable civilians that armed terrorist groups committed in the village of Zarah, Hama governorate [Syria].
At dawn on Thursday, 12 May 2016, terrorists belonging to the Nusrah Front, Ahrar al Sham and allied factions infiltrated the town of Zarah, Hama governorate, and perpetrated a horrific massacre of the town’s peaceable civilian residents, slaughtering them as they slept in their beds, regardless of whether the victims were children, women, elderly persons or sick persons. The terrorists mutilated the victims’ bodies with a savagery that makes one’s blood run cold. Before perpetrating this massacre, the terrorists had bombarded the village with rockets, mortar shells and “hell cannons”, destroying homes and private and public property. Many innocent civilians died or were injured as a result of the initial onslaught, while a number of others were executed on the Rastan Bridge. Dozens more civilians also sustained injuries of varying severity. In addition, the terrorists abducted many of the residents of Zarah, mostly children and women, and took them to a location that remains unknown.
Many armed groups, which certain Western and other States consider to be “moderate armed groups”, including such groups as the Nusrah Front, the Ahrar al Sham Islamic Movement, the Homs Corps, Kata’ib Ahl al Sunnah and the Armies of Homs, unabashedly announced their responsibility for this bloody massacre on their social media sites. They confirmed that they had jointly attacked Zarah and perpetrated the massacre as had been planned and agreed on in advance.
The horrific massacre that the armed terrorist groups committed is part of the series of systematic terrorist attacks that have been direct against several Syrian cities on the direct orders of the extremist and fundamentalist regimes in Riyadh, Ankara and Doha. Those attacks are designed to thwart efforts to stop the shedding of Syrian blood and to undermine the Geneva talks, the de-escalation measures and the agreement on the cessation of hostilities in Syria. This horrific massacre was perpetrated just as the representatives of the United States, France, Britain and Ukraine in the Security Council refused to add the Nusrah Front and Ahrar al Sham organizations to the list of terrorist groups, undertakings and entities maintained by the Council. That course of action is indicative of those States’ encouragement of the crimes committed by those organizations and of their insistence on ignoring those crimes. It also demonstrates that those States are not serious about countering terrorism or halting the fighting in Syria.
The Zarah massacre is the product of the refusal of the Security Council to condemn the heinous acts of terrorism being committed by armed terrorist groups throughout the Syrian Arab Republic, and the refusal of certain Council members to take deterrent and punitive measures without delay against those States and regimes that support and finance terrorism, including the regimes in Riyadh, Ankara and Doha, which have not hesitated to employ terrorism, various armed terrorist groups and other base means to achieve their vile goals.
The Government of the Syrian Arab Republic affirms that this horrific terrorist massacre and other terrorist attacks will not deter it from continuing to fulfill its duty to counter terrorism and strive to bring about a political solution to the Syrian crisis through an intra-Syrian dialogue and under Syrian leadership, leading to the elimination of terrorism; the reconstruction of that which was destroyed by the terrorists and their partners, financial backers and supporters; and the restoration of security and stability for the Syrian people.
The Government of the Syrian Arab Republic calls on the Security Council and the Secretary-General to condemn immediately this massacre that was committed by terrorists. It also calls on the Security Council to fulfill its responsibility to maintain international peace and security by taking preventive and punitive measures immediately in respect of those regimes and States that support and fund terrorism, including the regimes of Saudi Arabia, Turkey and Qatar. The Council must prevent those States from continuing to fund terrorism and undermining international security and peace, and compel them to implement fully the relevant Security Council resolutions, including resolutions 2170 (2014), 2178 (2014), 2199 (2015) and 2253 (2015).
I should be grateful if the present letter could be issued as a document of the Security Council.
(Signed) Bashar Ja’afari
Ambassador
Permanent Representative
*********
My Notes

1. The letter was published by Voltaire Network on May 14.

2. Regarding the statement, "Many armed groups, which certain Western and other States consider to be “moderate armed groups”, including such groups as the Nusrah Front ..." --

Ja'afari is splitting hairs but then he's entitled to do so. See May 14 Reuters report (published two days after the massacre in Zarah),  Britain, France counter Syria call for UN to sanction militants.  The two governments are balking at listing Nusra Front as an organization distinct from al Qaeda.

I'd say that given the large number of Qaeda sub-sects worldwide, it makes sense to list them separately; e.g., "Al Nusra Front (Al Qaeda, Syria)." But until the dispute is settled, Nusra remains in the 'moderate' column for those members of the U.S.-led coalition who are themselves splitting hairs and doing so in the face of massacres.

3.  Regarding the statement. "... representatives of the United States, France, Britain and Ukraine in the Security Council refused to add the Nusrah Front and Ahrar al Sham organizations to the list of terrorist groups, undertakings and entities maintained by the Council." --

I don't understand why the United States would be included with the refusal to add Nusra because the group was designated a terrorist organization by the State Department in December. I also don't understand how Ukraine got involved in this.

4. Regarding the U.S. position on Ahrar al Sham, see this report from RT, May 24, No ‘yellow card’ for Ahrar Al-Sham in Syria despite massacre reports – State Dept:


Washington will continue to back a rebel group that reportedly committed a massacre in Syria, because they were “vetted” by the Saudis and play a role in the Syrian political process, the State Department spokesman told reporters.

Ahrar Al-Sham (Harakat Ahrar ash-Sham al-Islamiyya or “Islamic Movement of the Free Men of the Levant”) is one of the largest rebel groups in Syria, and belongs to the Saudi-backed High Negotiating Committee (HNC). It is considered a party to the Syrian ceasefire, negotiated by Russia and the US.

On May 13, however, Al-Sham fighters raided the village of Al-Zara, killing and capturing scores of inhabitants. Speaking to RT Arabic, the surviving villagers described the attack as a“massacre.”

Two days earlier, Washington blocked a Russian proposal at the UN to delegitimize Ahrar ash-Sham and another group called Jaysh al-Islam, over their regular violations of the ceasefire. Britain, France and Ukraine sided with the US. On Tuesday, State Department spokesman Mark Toner defended the decision.

“Ahrar al-Sham is not a designated Foreign Terrorist Organization,” Toner told reporters, in response to a question from RT’s Gayane Chichakyan. “It is part of this vetted group of opposition forces that are part of the HNC. That was [the] process mostly led by Saudi Arabia, but with the consent of other members of ISSG, and that includes Russia.”

But Mr Toner that's not the issue the Russians are pointing out. The issue is whether ASS is party to the cessation of hostilities agreement; if it is and keeps breaking the agreement it needs to be, uh, delegitimized.  Never mind; Mr Toner perfectly understands what the Russians are saying:


Asked whether the US would pressure the group to abide by the ceasefire, Toner was noncommittal.

“We’re not giving them a yellow card,” he said.