Flooding in the Mississippi River Delta: an economic disaster inexorably engulfs more and more of USA

"Economists are only just beginning to assess the potential headwinds of the Mississippi River flooding. ... The flooding has affected other states, including Arkansas, Illinois, Kentucky and Missouri." 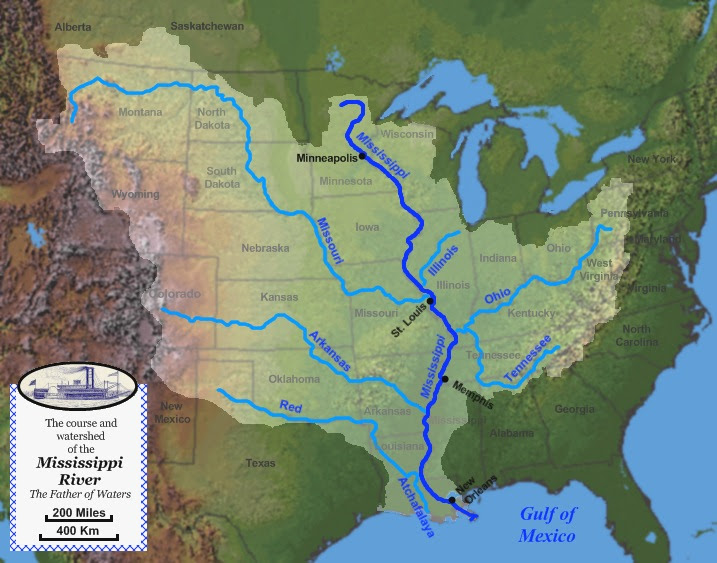 God. First the financial sector meltdown and burst housing bubble. Then the Gulf oil spill. We haven't recovered from any of those. Now another perfect storm:

The swollen Mississippi River, already spilling over into wide areas of the Mississippi Delta, has dealt the South a heavy economic blow that is seeping into every possible corner of the region’s commercial and agricultural life.

From Tennessee to Louisiana, the arteries and tributaries that normally supply the lifeblood of trade and business to the communities along the river’s banks are now paralyzing them. The engorged river has disrupted waterway commerce, delaying barge traffic and forcing some cargo to be trucked overland. Grain elevators, a crucial link to the nation’s grain exports, have been swamped. Early corn and soybean plantings on delta farms are submerged.

Like the very nature of water, the trickle-down effects of the historic flooding are leaving no corner untouched. Retail gasoline prices, already at two-year highs, and food prices could rise in the region because of supply disruptions. Tens of thousands of people are unemployed, shut out of jobs at establishments that are literally under water. State and local government coffers, strained because of the economic downturn, may lose many millions of dollars in revenue from tourism and taxes.

In about a dozen interviews, economists, farmers and industry officials said they expected hundreds of millions of dollars in damages including crop and infrastructure destruction in communities along the 740 miles of river that meanders from Memphis to New Orleans. But while the final bill has yet to be determined, the costs are already being felt.

In Yazoo County, Miss., John Phillips, a 61-year-old farmer, said thousands of acres of his cotton and corn crops had been destroyed. “In our area in the south delta, it is a widespread and very economically devastating disaster,” he said in a telephone interview, as he tried to run a pump. He said his annual revenue would be reduced by 40 percent because it was too late to replant.

In Louisiana, oyster beds have been flushed with fresh water from the river after spillways were opened. Already, the state’s crucial seafood industry had been reeling from the BP oil spill.

“Oysters are getting crucified,” said Harlon H. Pearce Jr., the executive director of Louisiana Seafood Promotion and Marketing Board. “This water hit at the absolute worst time.”

Along the river, barge operators are weathering the economic turbulence. It costs an operator about $10,000 a day when there is a delay with a tow, which helps the unwieldy barges, sometimes up to 45 of them tied together, navigate.

“One barge has the capacity of 16 rail cars or 70 trucks,” said Anne D. Burns, a spokeswoman at American Waterways Operators. The river’s barge traffic, Ms. Burns added, “is one of the significant building blocks of our economy.”

With the recent flooding, barges are running lighter loads and traveling during the day because navigation markers are submerged. Delays can have ripple effects throughout the economy, like slower coal deliveries to utilities, where costs can be passed on to consumers, or disruptions to the nation’s grain exports that travel down the river, she added.

“All those things are slowing down the delivery of these commodities,” Ms. Burns said.

The flooding has affected other states, including Arkansas, Illinois, Kentucky and Missouri. In addition to farming, businesses including catfish farms, hunting and fishing tourism, and casinos up and down the river have been affected.

About 100,000 acres of croplands, some planted with sugar cane and rice, was flooded over the weekend in the Atchafalaya Basin in Louisiana when the Morganza spillway was opened, but the damage assessment has not been completed, said an Army Corps economist, Lee Robinson.

In broad terms, the economic hardships facing the affected areas are traumatic to residents at any time, but they are also taking place when the nation is trying to recover from the 2008 financial crisis.

Economists are only just beginning to assess the potential headwinds of the Mississippi River flooding. An academic study released last week said the cost to the Memphis area, including the city and the 630,000 people in 18 counties that feed into the urban area in jobs or spending, could reach $753 million in damages to crops, residences, and commercial and public infrastructure.

An author of the study, Michael J. Hicks, the director of the Center for Business and Economic Research at Ball State University, said there were losses to the region’s consumer base and trade disruptions in a region that connects the manufacturing heartland of the Midwest with routes traveling between the East and the West.

“I am going to estimate in the $6 billion to $9 billion range for total damages from Memphis southward to the gulf,” Mr. Hicks said.

Between 2.1 million to 2.2 million acres of farmland have so far been affected by the flooding in the delta region, or about 1 percent of all United States cropland, according to estimates from the Army Corps of Engineers.

While acknowledging the regional devastation, however, government economists say they do not expect a national grain shortage because there are plentiful stocks. A lot will depend on whether farmers will be able to replant.

Oil companies have also been affected. In the Memphis area, Valero’s refinery is located on a bluff, and another one west of New Orleans is protected by levees. But with memories still fresh from Hurricane Katrina, Valero moved up its hurricane preparedness plans, securing equipment or moving it to higher ground, said a spokesman, Bill Day.

Exxon Mobil shut the docks at its refinery and petrochemical complex in Baton Rouge, La., and is only using its pipeline for operations. Its second refinery in Chalmette, near New Orleans, was not affected, said Kevin Allexon, a company spokesman.

Mr. Allexon said the company had contingency plans, like outside storage capacity. “We have invested a lot of resources to prepare and plan for this situation,” he said. “If you operate in the Gulf of Mexico region you need to be ready for weather-related events, whether it is flooding or hurricanes or both.”