Note to Pakistan's armed forces: President Obama is throwing you a lifeline; better grab it

May 20 Update 12:15 AM: See also my post last night re Gilani's trip to China for more background on the issue of Pakistan-China relations in the post-OBL era.
__________

Victim of May 13 terrorist attack on Frontier Constabulary in Charsadda, Pakistan 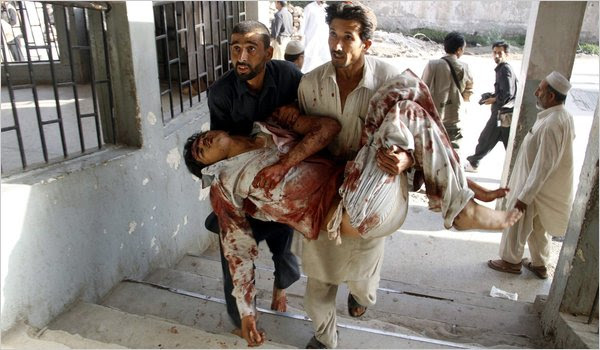 Even many Pakistanis believe the ISI was harboring Osama bin Laden, so there's a lot of blame-shifting and finger-pointing going on in the government. And, as B. Raman details in his May 17 post, the armed forces feel humiliated because the U.S. was able to pull off the raid in Abbottabad right under their noses.

However, the military has told so many lies over the years to puff up their efficiency that several Qaeda-friendly jihadi groups in Pakistan don't believe the raid could have been carried off without cooperation from a branch of the military. So those groups are on a rampage against Pakistan's military.

In short, Rawalpindi is getting it from all sides in the wake of the Abbottabad raid. For that reason Raman is concerned that Rawalpindi might try to put a shine back on its tarnished reputation by directing terrorist attack at India. That would be a stupid move because it took everyone outside Syria all of 6 minutes to figure out that Syria's government was behind the Palestinian 'freedom protest' against Israel on May 15 -- 1 minute to realize what the government was up to (Bashy Assad's attempt to deflect world attention from his brutal quashing of Syrian protests) and the remaining 5 minutes to attempt to figure out whether Bashy thought the year was 1990 or 1982. (1)

Yes, in today's world it's not easy for a government to be a sneak. Over at Zenpundit blog, Mark Safranski has written a wondefully practical essay on the difficulties governments face in pulling off clandestine operations in the age of connectivity.

He winds up with the observation, "Being invisible in plain sight is an art that will grow increasingly rare."

That's right. The November 2008 attack on Mumbai was the harbinger, as police honed in on cell phone communications between the terrorists and their handlers -- communications that pointed straight at the ISI.

But the harbinger for the course of Pakistan's relations with the rest of the world was the December 2007 assassination of Benazir Bhutto in Rawalpindi. Benazir had many friends at the United Nations, so by the time the UN wrapped up its investigation of the assassination even the British and American governments found it hard to keep covering for Rawalpindi.

As for Rawalpindi's fallback defensive line -- that it needs to protect Pakistan against India -- that line was frayed when the Jewish outreach center, Chabad House, was attacked during the 2008 massacre in Mumbai. The line snapped when David Coleman Headley, a co-conspirator in the massacre who confessed he'd worked for officers in the ISI, revealed that the Danish newspaper that had published cartoons of the prophet Mohammad had also been marked for a terrorist attack.

The only people in Washington still pushing the line are influence agents in the pay of Pakistan's government and U.S. defense analysts and NATO toadies who are so daffy they couldn't find their hands with a flashlight. Either way, nobody's buying the line anymore that Pakistan carries out atrocities because it's scared of India.

Understand? Humpty Dumpty has fallen off the wall. If Islamabad and Rawalpindi think China can help put Humpty back together they're not only behind the times, they also don't understand the Chinese.(2)

More than they want to see India destabilized, more than they want to see the United States preoccupied with the war on terror, more than anything in the world, the Chinese want China to be a great nation and to be seen as such on the world stage. The Chinese know what it takes to be seen as a great nation. So, only provided the terrorists Rawalpindi nurtured kept it down to a dull roar was Beijing was willing to support Pakistan's bloody-minded machinations against India and the United States. But if Pakistanis think the Chinese will risk everything they've sacrificed for, just to be seen by the world as supporters of a nation of anarchist terrorists, those Pakistanis need their heads examined.

If Rawalpindi doesn't want to believe me, it needs to believe this: At the end of April, China's government published in English) a white paper on the country's planned next phase in its foreign aid policy . The government has more than a $1 trillion to lavish on aid. About half the aid is earmarked for North Korea but a large chunk of the remainder Beijing plans to lavish on investment in U.S. companies.

The plan is not made from the goodness of their hearts; the leaders want concessions from the U.S. government in return for their largesse. But the new policy also indicates that China's government has listened to every criticism that's been voiced about its earlier foreign-aid policy and is adjusting the new policy accordingly.

If you want a ten-minute crash course on the latest evolution in Chinese foreign-aid policy, listen to the podcast of John Batchelor's May 11 discussion with Blair Glencorse. But in short the policy is a clear reflection of China's goal to become a great nation -- and, they hope, the greatest of nations. The Chinese still have a long way to go in that regard, no matter what their economic progress, and they know that. But the new foreign-aid policy demonstrates they have never taken their eyes from the goal. That means they won't allow anything, and certainly not the whines of Pakistan's military, to mess up their climb to the top of the world's heap.

As for Iran -- does Rawalpindi honestly think the country's military will stand by this time around, and watch Pakistan's ghouls-for-hire massacre Afghanistan's Persian-speaking women and children and skin the men alive?

As for Pakistan's BFF Great Britain -- David Cameron served public notice last year on Pakistan during his speech in India that the British defense establishment was tired of being extorted.

As for Pakistan's new friend, Germany -- how does Rawalpindi think Germany's defense establishment has taken the news that Pakistan is harboring German nationals planning to launch terrorist attacks on German soil?

To tie it in a bow, during the space of little more than two years the entire world has seen that Pakistan is Mayhem, Inc. There is no easy way for Pakistan to alter the perception but Senator John Kerry, acting as a personal envoy for President Barack Obama, went to Pakistan to offer Rawalpindi an honorable course of action: Cooperate fully with the U.S. defense establishment in routing terrorist organizations lodged in Pakistan.

The course would be very painful -- there would be many deaths, many killings in retaliation; however, there have already been many massacres in retaliation. Less than a week ago 80 cadets at a Pakistani paramilitary police agency were massacred by terrorist bombs and more than 120 were wounded in the attack.

It is time for Pakistan's military leaders to say, 'Enough,' and tell jihadi sympathizers in their ranks, and the Pakistani public, that God Willing and with America's invited help, the reign of terror is going to end in Pakistan. That is the only way for the nation's military to restore its tarnished reputation and lead Pakistan out of its crisis.

That would be my polite way of explaining to the media that they needed to do their utmost to sell my decision to publicly invite U.S. troops into Pakistan.

And then there's the manly way of handling things: Grit one's teeth and mutter that one might as well be hanged for a sin committed than be tortured to death for a sin omitted.

I'm sure Rawalpindi could come up with other ways of breaking the bad news but no matter what the plan Pakistan's leaders would be wise to take the deal Kerry offered.

[...] I want to bring in two more voices now. Jill Dougherty at the State Department and professor Fouad Ajami of the Johns Hopkins School of Advanced International Studies as well as the Hoover Institution.

Jill, the White House, the State Department both publicly blaming the Syrian government for clashes between Israeli soldiers and unarmed protesters on the border yesterday, Palestinians who were living in Syria. Do they have the evidence to prove that?

JILL DOUGHERTY, CNN FOREIGN AFFAIRS CORRESPONDENT: You know, what they would say is look at the border and what's happening, or what did happen, because that border along the Golan Heights is actually very quiet. It was famous for being quiet, actually, going way back to 1974.

Then all of a sudden, one day, people are allowed to come up to it as they had never been able to before, and so the State Department is saying that is an indication of what's going on, which is, they would argue, Syria is trying to destabilize the situation and do a couple of things. You know, send a message perhaps that they can create some real mischief if they are attacked and under pressure by the international community and the United States.

COOPER: Fouad, no one seems to be raising any doubts about the Palestinians who were the ones who went up to the border and the reality of their beliefs, but you have no doubt that this was a -- basically a well-orchestrated warning from the Assad regime, allowing these Palestinians to get to the border.

FOUAD AJAMI, PROFESSOR JOHNS HOPKINS SCHOOL OF ADVANCED INTERNATIONAL STUDIES: I have no shred of any doubt about this. If you take a look, Anderson, at this border between Syria and Israel, this is the most quiet border in the Middle East. The terms of disengagement were negotiated many, many years ago by none other than Secretary of State Henry Kissinger in 1974, as Jill already said.

So if you go back and look at this border, this border is as quiet as a tomb. And the Syrians would never allow the Palestinians to come close to the Golan Heights and to come close to the border with Israel. This is completely a transparent ploy by the Syrian regime. They are killing their own people. They're at war with their own people. And I think this is just a very, very transparent action.

2) Two reports on Pakistan's attempts to use China as a wedge against the United States in Afghanistan:

Christian Science Monitor, May 18, 2011 What Pakistan Prime Minister Gilani wants from China
The Pakistan premier may be trying to forge a loose alliance between China, Pakistan, and Afghanistan to undermine US influence in the region.
Posted by Pundita at 5/18/2011 05:59:00 AM