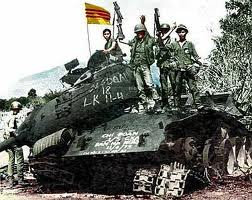 "Through it all, Veith dispels the misconception that the South Vietnamese fought poorly and disintegrated in the face of a resolute North Vietnamese onslaught. Unit after unit fought with valor against overwhelming odds. Perhaps the most valiant was the South Vietnamese 18th Division, defending Xuan Loc, 40 miles northeast of Saigon, which withstood the Communist battering from 9 to 21 April and forced the North Vietnamese Army to pay a high price in casualties before succumbing.

"At the beginning of the text, Veith deflates one rampant myth — that the Viet Cong and the North Vietnamese Army were independent entities. Nearly all U. S. military leaders bought into the North Vietnamese propaganda that the war was a rebellion by patriotic southerners assisted by a sympathetic northern neighbor. Veith demonstrates that North Vietnam was from the beginning the aggressor, completely in control of its southern subordinates. It violated the Paris Accords almost as soon as they were signed and never flinched in its determination to conquer South Vietnam."
-- From Tom Glenn's review of the magisterial Black April:  The Fall of South Vietnam, 1973-75 by George J. Veith

Last night John Batchelor interviewed George Veith about the book, which was published May 2012. The interview is available on flash player, or download from the WABC radio website (Tuesday, 11 PM segment).

Now look, I'm going to warn American readers, especially those who lost a relative in Vietnam, that Veith's book presents much new material. See the Amazon website, linked to above in the book title, for  information on the material.

John's conversation with the author is more a synopsis of the book than an interview. When Veith didn't cover enough ground fast enough, John pretty much took over, summarizing events and referencing maps he'd spread in front of him.

The upshot is that within about 40 minutes the listener has a clear picture of how easily the U.S. Congress could have helped South Vietnamese forces beat the Communists and without risk to American life.