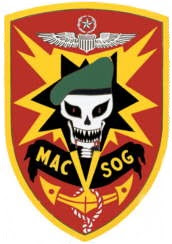 My favorite exchange from John Batchelor's discussion last night with Robert M. Gillespie, author of Black Ops, Vietnam: An Operational History of MACVSOG, was when John asked, "What can a small team do against tens of thousands?"

Gillespie replied with a grin in his voice, "Be as clandestine as possible."

From Amazon's overview of the book, which was published September 15, 2011:


Without doubt the most unique U.S. unit to participate in the Vietnam War, the Military Assistance Command, Vietnam Studies and Observations Group (MACVSOG) was a highly-classified, U.S. joint-service organization consisting of Army Special Forces, Navy SEALs, Marine Force Reconnaissance units, the Air Force, and the CIA. Committed to action in Southeast Asia even before the major U.S. build-up in 1965, it also fielded a division-sized element of South Vietnamese military personnel, indigenous Montagnards, ethnic Chinese Nungs, and Taiwanese pilots.

During its nine-year existence, MACVSOG participated in most of the significant operations of the conflict, including the Gulf of Tonkin incident, the Tet Offensive, the incursion into Cambodia, the Green Beret murder case, the Phoenix program, and the Son Tay POW raid.

The story of this extraordinary unit has never before been told in full and comes as a timely blueprint for today's unconventional warfare.

Published in cooperation with the Association of the United States Army.

From one review of the book that's posted at the U.S. Naval Institute website:


Assembled from declassified documents and memoirs, Black Ops Vietnam is an in-depth focus on the deeds of this elite group, and its true stories are especially relevant amid today's problematic, complex, and difficult ongoing counter-insurgency operations. Highly recommended, especially for college library military history shelves."
— The Midwest Book Review, November 2011

Yes, the book is especially relevant to the present conflict -- to counterterrorism operations as well as counterinsurgency ones. But one wonders why so many of the lessons learned from MACV-SOG's relationships with the U.S. and South Vietnamese military command structure and political Washington, which were often tragic, seemed to have been ignored in this era, and in the Afghan conflict in particular.

It's from that angle, the aspect of a vital special operations team that was being tasked with doing so much and not receiving the kind of support it really required, that John approaches the book.

He remarked at the end of the discussion, "It's worth considering that we had allies 50 years ago and we lost them."

We have allies in Iraq and Afghanistan, but we seem intent on losing them, too.

John's talk with the author is available on Flash Player and can also be downloaded from the WABC Radio website (11 PM-12 AM - Wed, Nov 14) segment.

I note this is the second time this week that John has dedicated an hour of his show to a Vietnam War history.  (See my post, Black April, for information about the first.) So I'm wondering if there's a Batchelor Vietnam War series in the making, even though he's discussed many Vietnam War books over the years.

If I'm right, and if he carries the book discussions over to the weekend, a reminder for those who're interested:  No podcasts for the Saturday and Sunday shows. And he doesn't publish the roster of the night's guests/topics until near the end of the show or after it's aired. So it's potluck. Of course you can always listen to the show online while it's being aired or tape it. Visit the WABC website, linked above, to listen online