Memo to GOP: Would you get your mind off Obama and focus on the weather reports? 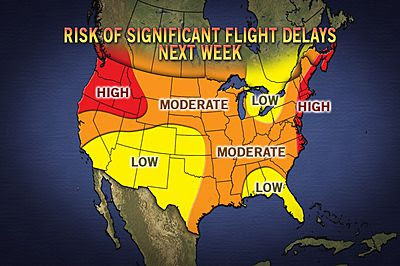 Glenn Beck and it seems a great many others, including those in the Republican party, are worried that the Democratic  machine got Obama  reelected by using Behaviorist psychology.  Breaking News:  The Leftists have only been screwing with voters' heads since they studied Pavlov's experiments.

But Glenn of all people should know that the political machines, both the Democratic and Republican, are fast going the way of the electric typewriter.

So can we please kindly focus on the latest report from AccuWeather? To help maintain focus, look at the red streak on the right of the AccuWeather map above.  That's the same region where Superstorm Sandy, and the nor'easter that followed on Sandy's heels, hit the worst.

The part of the I-95 corridor where Sandy did the worst damage represents 20-25 percent of the nation's retail sales. So the very last thing we need is another nor'easter hitting around the Thanksgiving holiday and Black Thursday.  (Many retailers are extending Black Friday sales to Thanksgiving Day.) And this is saying nothing about relief efforts for Sandy victims that have gotten bogged down. More about that later, but right now:

Another nor'easter during Thanksgiving week will put travel in jeopardy for the holiday, while a storm also hits the West Coast.

A nor'easter may form over the western Atlantic by Sunday, sending rain and wind into parts of the mid-Atlantic and Northeast through at least the middle of the week.

"How close to the coast the storm tracks will determine how unsettled the weather gets in the I-95 corridor to the Appalachians," AccuWeather.com Expert Senior Meteorologist Alex Sosnowski said.

There is potential that the nor'easter could strengthen and move farther inland into New England at midweek. In this scenario, there is some potential for a wintry mix or snow over the mountains of northern New England.
[...]

If you live within the red blotch on the West Coast, then you'd want to read the rest of the report.