4+1 coalition is taking the fight to ISIS in Syria and Iraq while U.S.-led coalition dithers

"The total number of ISIS fighters in the area is estimated between 5,000 and 12,000. The current U.S. strikes are not even pinpricks."

Over at Sic Semper Tyrannis they've counted the Syrian government's coalition since Russia's entry as "R+6" (I think SST's count included large militias). But the coalition to fight ISIS in both Syria and Iraq is formally 4+1, as b at Moon of Alabama details in his data-rich April 24 report, which I'm reposting here in its entirety including photos and graphics. It is extremely important for American readers to get an idea of the extent to which their government has been misinforming them about the U.S. fight against Islamic State.

If the report will seem familiar to those who've been following Long War Journal's reports on Afghanistan for years  -- yes, for years LWJ reported on the activities of al Qaeda in Afghanistan while the U.S./ISAF military command dismissed such reports, saying al Qaeda had virtually no presence in the country. It was the same with the Taliban's progress at taking over more and more territory. In both cases, years went by before the U.S. finally had to concede the very robust presence of al Qaeda in Afghanistan and the Taliban's large gains.

The U.S. pattern of obfustication has been repeated in Syria and Iraq with Islamic State. But the 4+1 coalition created to fight IS is not to be confused with Afghanistan's defense establishment -- which of course doesn't have an air force to speak of. And doesn't have Maj. General Qassem Soleimani as an adviser. And doesn't have Russian assistance.

All right; here's the report from Moon of Alabama,  Syria-Iraq: U.S. Coddles ISIS - Others Plan For The Final Fight

#Iraq's strike on a known Daesh HQ in Syria was planned/conducted by the Iraqi Security Forces, w/ support from @CJTFOIR. This strike shows Iraq's willingness to do what's necessary to secure its citizens as well as their important role in the Global @Coalition to #defeatDaesh

The above tweet by the spokesperson for the U.S. Operation Inherent Resolve (OIR) against ISIS is extremely misleading if not false. The U.S. is trying to take some credit for a strike which was done without its consensus. The attack against ISIS was initiated by an anti-U.S. alliance as a warning against further U.S. shenanigans with ISIS.

The U.S. military in Syria has refrained from fighting ISIS for months. The map of the territory held by ISIS (grey) at the Syrian-Iraqi border in the U.S. controlled zone north of the Euphrates (yellow) has not changed since November 2017. 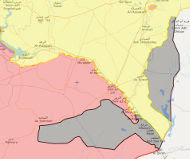 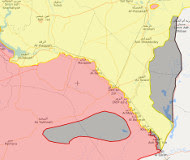 (The yellow corridor going south east towards Iraq on the map is misleading. The U.S. has no forces there and ISIS crossed it several times to attack Syrian forces (red) across the river.)

The British group Airwars documents the U.S. airstrikes in Iraq and Syria. U.S. strikes on ISIS in Syria are down to one per day or less:

The U.S. strikes hit, if anything, only very minor targets. From OIR's weekly summary from March 30 to April 5 (Syria only):
Two cars and three assumed militants (aka 'tactical units') targeted in one week is not a fight at all. The total number of ISIS fighters in the area is estimated between 5,000 and 12,000. The current U.S. strikes are not even pinpricks.

It is obvious that the U.S. wants to keep ISIS alive and well to again use it, if need be, against the Syrian and Iraqi government. Then Secretary of State Kerry as well as then President Obama admitted that they used ISIS to put pressure on the Syrian President Assad and then Prime Minister of Iraq Maliki:

The reason, the president added, “that we did not just start taking a bunch of airstrikes all across Iraq as soon as ISIL came in was because that would have taken the pressure off of [Prime Minister Nuri Kamal] al-Maliki.

We now see a repeat of such 'games'. ISIS was given time to rest. It is regaining capacities especially in Iraq's Anbar province where it is moving between villages and threatening the inhabitants. It is issuing new strategic instructions to its followers and calls on them to attack or sabotage the upcoming elections in Iraq.

As the U.S. is unwilling to fight ISIS, the governments of Iraq, Syria, Iran and Russia (+ Lebanon's Hizbullah) decided to again take the issue into their own hands. On April 19 the 4+1 met for coordinating their future campaigns. 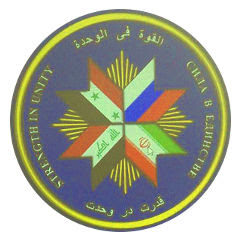 Military officials from Iraq, Syria, Iran and Russia meet in their Baghdad operations room to coordinate the further fight against ISIS. Note the four flags on the head table. 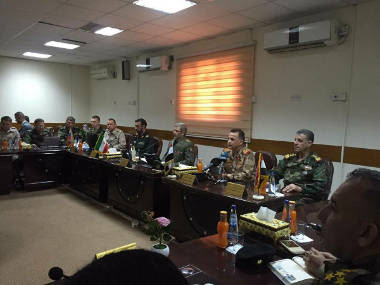 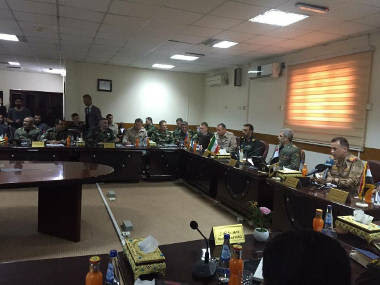 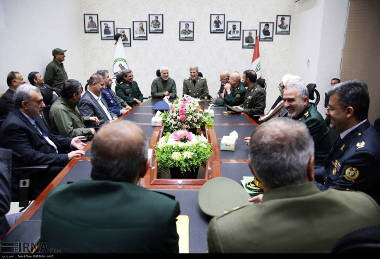 The high level operations room meeting agreed upon future operations and strikes. Before the meeting military intelligence officials of the 4+1 had identified a potential target for a common operation. An attack was planned and designed to give the new combat phase some fresh impetus. It was also intended to be a warning to the U.S.

Shortly after the meeting the Iraqi air force hit an ISIS command and control center in east-Syria near Abu Kamal within the nominally U.S. controlled zone:

According to an Iraqi military spokesperson, the operation was fully coordinated with the Syrian army.

The Iraqi Ministry of Defense distributed video of the successful strike on a three story villa. Iraq later announced that 36 ISIS fighters, including high ranking ISIS commanders, were killed in the strike.

After the strike had happened the U.S. Operation Inherent Resolve tried to take credit for the attack by claiming that it was involved.

SOUTHWEST ASIA – The Iraqi air force conducted an air strike near Hajin, Syria, against Daesh terrorists operating near the Iraq-Syria border on April 19. The strike was approved by the Iraqi Prime Minister and Commander-in-Chief of the Armed Forces Dr. Haider Al Abadi.

The strike demonstrates Iraq’s commitment to destroy Daesh remnants who continue to threaten their citizens. The operation was planned and executed by the Iraqi Joint Operations Command with intelligence support from the Coalition.

The Combined Joint Task Force – Operation Inherent Resolve’s mission is to defeat Daesh in designated areas in Iraq and Syria, and sets conditions for follow-on operations to increase regional stability.

My sources say that the U.S. claim is misleading if not completely false. After the four commanders in the Baghdad op-room decided on the strike, the Iraqi command initiated the pre-planned attack. The Iraqis informed the U.S. OIR command that a strike would happen but gave only a rough description of the target area.

Said differently: no time was given to the U.S. to warn ISIS. The U.S. "intelligence support" for the operation consisted of keeping its planes out of the way.

The tweet by the OIR spox quoted above is a repeat of the statement the OIR command issued on April 19. It is claiming credit where none belongs.

While the U.S. coddles ISIS in Syria to again use it for its own purpose, the 4+1 plan for a larger common operation to finally destroy the Takfiri menace.

I expect that operation to begin only after the Iraqi parliament election on May 12 is over and a new Iraqi government is in place. Enough forces will have to be prepared on the Syrian as well as the Iraqi side of the border. On the Syrian side a military bridge to cross the Euphrates has recently been rebuilt by the Syrian military and new equipment is arriving in the area.  The meeting of the Iranian defense minister with the PMU hints at a strong role for these units in the upcoming fight.

Will the U.S. try to prevent or undermine the plan or will it stay out of the way?