On May 1 at 4:50 AM Leith Aboufadel reported on his Twitter page:

BEIRUT, LEBANON – The Islamic State (ISIS) is negotiating with the surrender of the Yarmouk Camp District to the Syrian Arab Army (SAA), a military source told Al-Masdar News tonight.
According to the source, ISIS initially began talks with the government last week when they agreed to exchange the bodies of the dead SAA soldiers for some of their relatives in government prisons.
While some terrorists chose to fight on, ISIS command now finds themselves in a rough positions, as they are fully besieged and no longer control the imperative farms that once surrounded Hajar Al-Aswad.
With these latest losses, Islamic State is likely to surrender the Yarmouk Camp in the next 48 hours.

Let's see if there's any late news on this from other sources; give me a moment [taptaptaptaptap tap]

Nothing specific to Yarmouk ...... but I see from earlier reports at SANA that the SAA has been working methodically around the camp ...... Ah Ha! They found the tunnels! In the southern part of al-Hajar al-Aswad neighborhood. May 5 -- yesterday by their time, or at least that's when SANA published photos of the tunnels. Here's one of the seven photos: 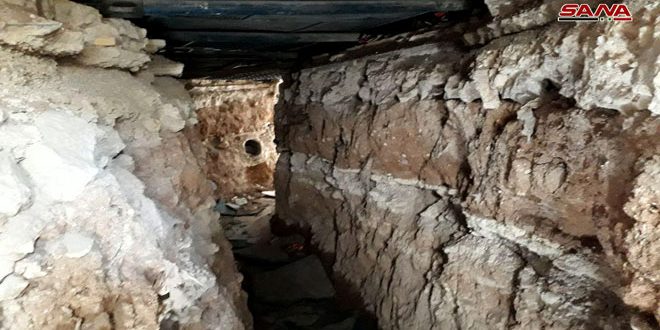 Looks like the bad guys are cut off from resupplies. I think that would mean they have no choice but to surrender. Let's see; it's 2:45 AM in Syria. Well, I won't be getting any sleep tonight. Keep an eye on Leith's Twitter page for early breaking news.

I overlooked this report timestamped "1:13" May 5 from FARS that has lots of detail on the SAA's operations in and near Yarmouk (FARS refers to ISIS as ISIL). And although the report doesn't mention the tunnels, it notes that the SAA has cut off the terrorists' supply routes:

TEHRAN (FNA)- The Syrian Army troops continued their operation in the Southern part of Damascus province and managed to push ISIL back from more areas in Hajar al-Aswad region on Saturday.

The army men engaged in fierce clashes with the ISIL in a region between al-A'alaf and al-Maqaber and managed to impose control over Hajar al-Aswad Governorship Building, Quneitra Workers Club Building and Power Company in the depth of Hajar al-Aswad region.

Also, the army's artillery and missile units and Air Force pounded ISIL's movements and positions in Hajar al-Aswad and Yarmouk Camp, destroying a main base of the terrorists in Yarmouk and killing the entire terrorists inside.

The army's advances have sped up in Hajar al-Aswad after the government forces managed to cut off militants' supply lines in the region.

In a similar development on Friday the army troops and their Palestinian popular allies stormed ISIL's positions in Yarmouk Camp and Hajar al-Aswad region in the Southern part of Damascus province, inflicting major losses on the terrorists.

The ISIL found themselves on the run at several flanks in both Hajar al-Aswad and Yarmouk Camp following a heavy joint offensive of the Syrian Army and their Palestinian allies.

According to a military source in Damascus, the Syrian Army and their Palestinian allies are currently advancing at the Southeastern and Western directions of Hajar al-Aswad, along with the Western flank of the Yarmouk Camp.