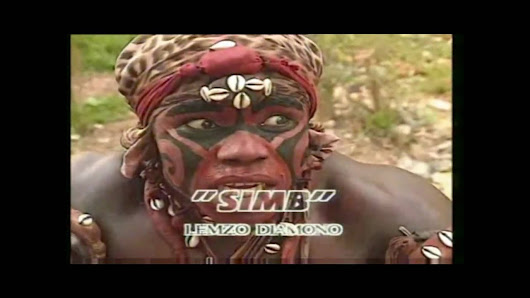 O woe is me! I was going to post it here last year! Now just see the wages of procrastination! Wait -- it's still posted at

Whew! All right, go there now. Yes of course you can watch it on full screen -- that's a 'must.' (You'll have to watch a short ad first.)

If you don't understand what you're seeing nevermind I'll explain in an update. Just watch it before it's blocked.

I'll be back after fanning myself and sniffing smelling salts.

They really should get the copyright issue fixed because "Simb" is not just a pop song; it's also part of Senegalese modern music history, as you can see by reading this page (page 135) at Google Books from "Choreographies of African Identities: Négritude, Dance, and the National Ballet of Senegal" by Francesca Castaldi.

But I would argue the "Simb" video is also part of Senegal's modern social history given the controversy about males performing the Sabar dance. The controversy is now more-or-less settled in favor of the males but at the time "Simb" was made, in the early 1990s, it was still raging.

The controversy, in brief:

The traditional Senegalese Sabar dance was exclusively performed by women. But with the advent of portable video cameras the Sabar had become a money-maker for performers. And with the rise of the wildly popular music genre called Mbalax, which brought in Sabar dancers, men were losing out.

And so men started performing the Sabar, which led to the claim in Senegal that any man who did the Sabar became a woman.

You can see the hilarious male retort in the "Simb" video.

> The traditional simb (lion) or gaynde (lion in Senegal's Wolof language) dance. You won't have any trouble identifying the gaynde dance in the video.

> The Sabar, which is on display with the guys (who are actually wrestlers, according to Castaldi) dressed up as women and cavorting like them in the dance.

> A dance called mu ley ce gin, which the "Simb" video popularized. The dance is also done by the wrestlers, this time dressed in military camouflage.

Castaldi notes that this mixing of the old (lion dance) with the new is part of the video's appeal.

As to the man acting like a big cat on the prowl in the video -- from Castaldi's explanation, there's a belief in Africa that hunters who kill a lion (or other big cat), or survive an attack by one, take on the qualities of the lion. There was a popular game in the low-income quarters of Senegal's capital city based on this belief; one of these lion-men (or someone dressed up like one) would chase the children -- a version of hide-and-seek, which Lemzo Diamono worked into the video.

So. There's a lot packed into the video. Maybe now you can see why I was upset at the thought it had disappeared from the Internet.

I've mentioned the Sabar controversy in at least one earlier post, a year or so back. That's why I'd  procrastinated about posting the "Simb" video; I'd wanted to write an explanation about the video's contribution to the controversy, which didn't get a mention in Castaldi's discussion about the video, at least not on the page the Google Books preview made available.