"The resupply should silence any talk that Russia has given up on Syria."

May God bless Bernhard, who really does try to keep up with the dizzying developments in Idlib. His new short note, just published, repeats some of the information in the post I put up a few minutes ago, which includes his older short note, but here goes:

Syria - Another Short Note On The Recent Developments
Moon of Alabama
March 2 - 18:39 UTC

After the confusion caused by the sudden stand down of Russian forces in Syria and the following Turkish drone attacks everything seems to be back to normal.

Russian planes are again bombing Jihadis and Turkey has been told by Russia that none of its planes or drones will be safe within Syria's sky.

The Pentagon announced that it will not provide air support to Turkey. It will also not send any Patriot air defense to Syria but President Trump promised to ask other NATO countries to do so. They are likely to deny the request. It seems that Pentagon has won the fight with the State Department which supported the Turkish push for protection.

The Turkish president Erdogan said that Turkey has no "particular problem" with Russian and Iran aligned forces in Idleb. This comes after Iran and Hizbullah had warned that Turkish troops in their now surrounded 'observation posts' would be easy targets. The Turkish units which have invaded Idleb were quiet today. 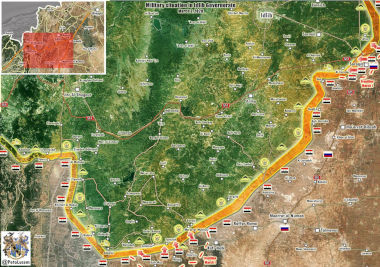 The Syrian army has again regained the areas that were lost during the last week. The city of Saraqib is again liberated. Russia let it known that its military police will take care of security in the city. This means that it is off limits for another Turkish Jihadi attack. The M5 highway can now be reopened and will be secure.

There is another large supply operation from Russia underway. During the last three days two Russian landing ships, which usually carry heavy weapons like tanks, passed through the Bosporus on their way to Syria. Eight Ilyushin Il-76 strategic airlifters landed at Hmeymim, Latakia during the past three days. These likely carry additional air defense systems or additional fighter planes.

The resupply should silence any talk that Russia has given up on Syria.

Erdogan wants Idleb but neither Syria nor Iran nor Russia will let him have it. President Putin will meet Erdogan during the next days and will make sure that the point is understood.