Astana: How to bring a wolf, sheep, and cabbage safely across a river?

The Syrian talks in Astana launch on Monday. Can these talks go anywhere?  Well, the organizers have ditched the "Geneva format" of negotiation used in earlier talks and for this round will be following what's now called the "Astana format."  See the second report below for details. By the way, here's what Astana looks like, for those thinking in terms of yurts: 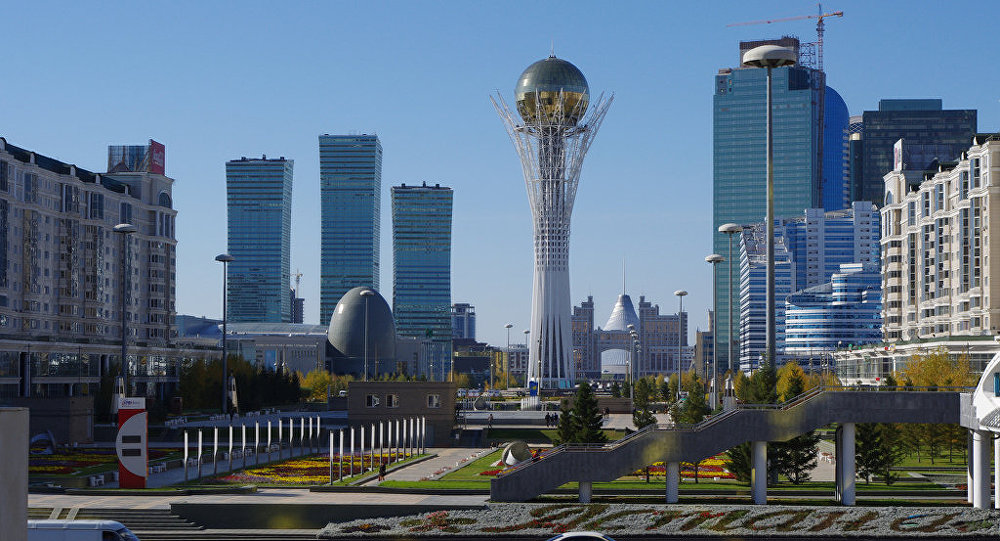 There are still yurts out in the boonies but it's just amazing what boatloads of petrodollars can accomplish when you want to build a city from scratch. Astana is also a somewhat strange unusual modern city, I might add, as the title of this fabulous article with fabulous photos suggests: Astana: The Illuminati Capital of Kazakhstan. Moving along --

A source in the Russian delegation to the Astana talks on Syria compared them to bringing "a wolf, a sheep and cabbage from one bank of the river to another" in terms of difficulty.

ASTANA (Sputnik) – Representatives of the Russian Defense Ministry are going to take part in Astana talks on Syrian peace settlement that will start on January 23, a source in the Russian delegation told Sputnik on Sunday.

"Of course they [representatives of the Defense Ministry] will participate, this is how it has been planned," the source said.

The source pointed out that it would be a very difficult task to reach consensus between Syrian warring parties.

“Of course we have an unbelievable task in front of us namely to bring a wolf, a sheep and cabbage from one bank of the river to another,” the source said adding that the Astana talks would be the first ones, in which armed opposition would take part.

The delegations from Russia, Turkey and Iran as well as the UN's Special Envoy for Syria Staffan de Mistura have already arrived in Astana.

The Syrian opposition groups agreed to attend the talks brokered by Russia, Turkey and Iran as an attempt to end the six-year civil war in the country, which sees government forces fighting against a number of opposition and terrorist groups, including Daesh [Islamic State], which is banned in Russia and many other countries.

Again, what are the chances these talks will make real headway? Possibly better than before, as this Sputnik report (21 January) explains:

Opposition field commanders will take part in the Syrian peace talks in Astana ...

Although the upcoming Syria peace talks in Kazakhstan's capital Astana will be no walk in the park, this conference is a step in the right direction in many respects, experts say.

"Meeting in Astana is quite an important stage of the process of settling the Syrian crisis," Boris Dolgov, a Senior Research Fellow at the Institute for Eastern Studies of the Russian Academy of Sciences, told RIA Novosti.

The expert pointed out that the Astana talks are due to bring together the Syrian government and the opposition, which is represented by armed groups with influence on the ground.

He remarked that the Geneva format engaged the Syrian political opposition, which does not have any serious support on the ground. Furthermore, this political opposition consists of at least four different groups backed by different foreign actors [including Saudi Arabia and Qatar], the expert underscored.

In this respect, Dolgov echoes Russian Foreign Minister Sergei Lavrov's remarks, which he delivered at a Moscow press conference on January 17.

"I believe that one obstacle to the talks was the fact that the UN only sent invitations to members of the political opposition, the overwhelming majority of whom were emigrants living in Europe, the Middle East or other countries but not in Syria, and to some opposition members in Syria… These talks were not attended by those who really determine the situation on the ground, that is, armed groups or armed opposition," Lavrov emphasized.

He specified that the goals of the Astana meeting include "the consolidation of the ceasefire regime" and the engagement of the armed opposition in the Syrian political process.

"This process was launched by the UN in Geneva but has lost momentum. There are plans to re-launch it. We believe that field commanders must participate in this process as full members," he noted.

Nevertheless, the Russian Foreign Minister has repeatedly referred to the fact that the Astana format is not aimed at replacing the Geneva negotiations.

Speaking at the Shanghai Cooperation Organization (SCO) summit Friday, Lavrov stressed that Monday's intra-Syrian talks in Astana are "an important contribution to… a comprehensive political settlement in Syria which will continue in wider activities in Geneva in early February."

For his part, Sergei Demidenko, lecturer at the Institute of Social Sciences of the Russian Presidential Academy of National Economy and Public Administration (RANERA), assumed that it would be hard for the Assad government and the armed groups to find common ground during the upcoming January talks.

However, according to the expert, the necessity to eradicate the threat posed by Daesh (ISIS/ISIL) could apparently unite the Syrian government and the militants.

"I think that it is unlikely that they [the Syrian government and the opposition] will negotiate dividing Syria into spheres of influence; I believe that the only issue they could hypothetically reach a compromise on is a joint operation against Daesh… This is [their] only point of convergence," Demidenko suggested in an interview with RIA Novosti.

The expert has drawn attention to the fact that many armed groups still do not accept that President Bashar al-Assad has held onto power in Syria; for his part, following a series of military successes the Syrian government is unlikely to make any substantial concessions to militants, Demidenko assumed.

On the other hand, it also deserves attention that the Assad government has to hold talks with a vast number of opposition organizations including the Free Syrian Army (FSA) and the National Coalition for Syrian Revolution and Opposition Forces.

"There are a vast number of these organizations," Demidenko stressed, "some are more 'moderate,' the others are less 'moderate,' and each [of the organizations] has its own demands; some say 'we will build an Islamic state,' some pledge to establish democracy, and some have yet to formulate their agenda. Therefore, I do not see any opportunity [for them] to reach common ground except for their possible joint fight against Daesh."

Likewise it is still hard to predict whether the Geneva talks will bring any tangible results, Demidenko underscored.

He believes that the Geneva meeting on Syria should be preceded by a series of summits in the Astana format.

"I believe that more meetings [in the Astana format] need to be held with the involvement of international mediators," he stressed.

The Syrian government and opposition groups are due to meet in Astana on January 23 for negotiations brokered by Russia, Turkey and Iran. The talks are aimed at establishing a platform for further peace negotiations. The Astana meeting comes on the heels of the Syrian nation-wide ceasefire endorsed by the UN Security Council on December 31, 2016.

As to the Rixos President Astana, like everything else in Astana this five-star hotel is fabulous. The pastries should be great.

It's like turducken. The sheep eats the cabbage, the wolf eats the sheep, you bring the wolf across the river. Voila!