You'll never guess what my government has done now in Syria

Just settle right on in, make yourselves at home.


TEHRAN (FNA)- Kurdish media sources disclosed that a large volume of heavy arms have been transferred by the US army helicopters to the Live Stone region along a road to Hasaka in Northeastern Syria.

Asia news quoted a source as saying that the Kurdish forces closed the road connecting al-Darbasiyeh to Hasaka and did not allow any vehicle to enter Live Stone region to secure deployment of the heavy weapons by the US helicopters.

Asia news further added that since the start of the second phase of the Euphrates Rage Operation in Raqqa, this is the first time that the US forces have transferred heavy weapons to Live Stone region near Hasaka city, meaning that the weapons won't be sent to Raqqa battlefields and will remain in the Kurdish regions in Hasaka.

According to reports, the weapons shipped to Live Stone region will likely be used in the third phase of the Euphrates Rage Operation.

The second phase of the Raqqa operation is nearing its end as the Kurdish fighters are reaching al-Tabaqa dam.

Informed sources disclosed in mid-November that the US forces intensified efforts to build a new military base in a region controlled by the Kurdish-led Democratic Union Party in Western Hasaka,

"The US forces have started to rapidly equip a military base in Jabal (mount) Abdul Aziz in the region under the control of the Democratic Union Party, an ally of Washington in Northern Syria," the sources said.

Sham Time quoted Zaman al-Wasl as saying that the Kurdish forces with the cooperation of the US soldiers cut hundreds of trees in the village of Maqloujeh near Jabal Abdul Aziz 30 kilometers to the West of Hasaka in order to build a landing platform for US army and US-led coalition forces' helicopters.

"The US forces started to equip the base after cutting the trees," the sources said.

"A group of US soldiers went to the village in military vehicles every day. But, they started to equip the base under the tight security measures of the Kurdish forces in Maqloujeh in recent days. The US forces have separated the base from the village by trenches and soil walls. They have tuned the base and its surrounding areas up to the Sakriyeh ancient citadel into a military zone," they added.

Did I mention that former British Army fighters --mercenaries -- have also decided to muck around in Syria, ostensibly to fight Islamic State? The British military has also decided to move in, of course without asking Syria's government. 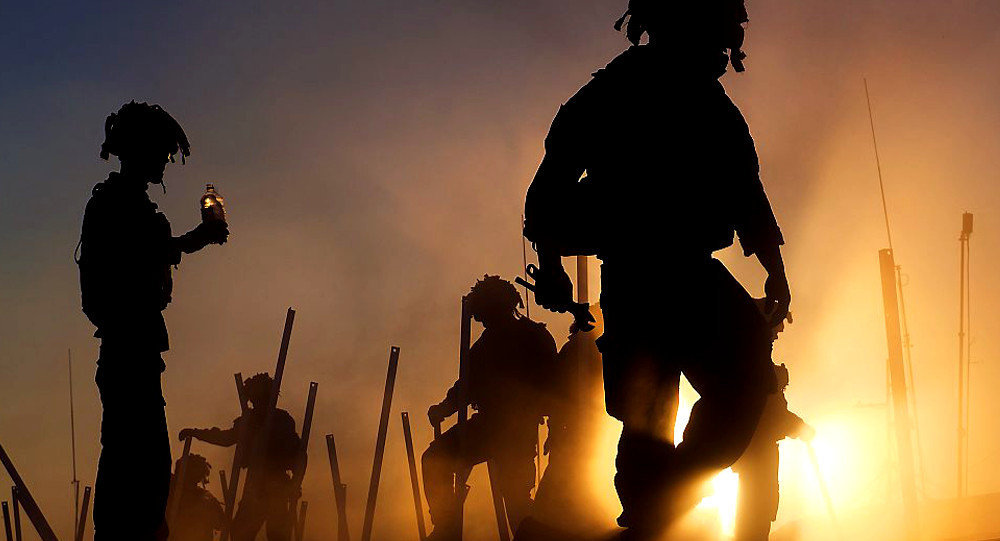 Commenting on reports in the British media that the UK is getting ready to "pivot" its focus from Iraq to Syria and "is preparing to mount a major offensive in Syria next year," Russian security expert Sergei Sokolov has explained to Radio Sputnik the real reason behind this move.

The UK's Royal Air Force (RAF) is "preparing to mount a major offensive in Syria next year as it takes the fight against ISIL (Daesh, Islamic State) to the "heart of the caliphate" in Raqqa," British national daily The Telegraph reported on Sunday.

t quoted senior military sources as saying that from next spring the RAF is "likely to 'pivot' its focus from Iraq to Syria as it seeks to bolster rebel forces fighting Syria."

The newspaper said that last year the RAF mounted just 60 air strikes in Syria compared to 347 in Iraq. However Britain hopes that Mosul will be "re-taken by spring of next year," which will enable "RAF Typhoons, Tornados and Reaper drones to mount a fresh offensive in Syria."

Commenting on the above reports, Russian expert from the Federal Information Center Analysis and Security Sergei Sokolov explained to Radio Sputnik that the UK simply wants to rival the successes of the Russian Aerospace Forces and Syrian government troops in Syria. "Neither the US nor the UK ask for any permission for such activities or support it with any international documents," he told Sputnik.