I'll add that a couple months before Egon Blant posted "Acceptance" to YouTube someone beat him to the punch, but using a gorgeous video of the sun slowly setting over water as the visual accompaniment, which I've used here for a special reason I'll perhaps explain in a subsequent post.
-- Pundita, August 25, 2016

Once a heruka walked into a bar and ordered a drink -- well, in those days, maybe a thousand years ago give or take a century, it was probably an inn but anyhow it served some kind of alcoholic beverage.

After downing the drink the heruka ordered another. The barkeep, who'd never seen him before, said he had to pay up before he got a second round.

The heruka took a dorje from his belt --a small dagger associated with ritual tantric ceremonies-- put it on the table, and said he'd pay as soon as the sun went down.

The barkeep looked outside and saw it was only about 10 minutes until sunset, so he played along.

After downing the second drink the heruka ordered another. Then another and another. By this time 10 minutes had come and gone, but the sun was in the same place it had been when the heruka placed the dorje on the table.

People inside the bar and outdoors were by then pointing at the sun and shouting that it wasn't moving in the sky.

The barkeep studied the dorje and its ordinary-looking owner and got a hunch.

There are different accounts as to what happened next. One is that the barkeep yelled, "You're a heruka! Get out of here!"

The other version, which is the more likely: The barkeep said, "All your drinks were on the house."

Whatever he said, the heruka's reply was to laugh. Then he picked up his dorje and left as the universe resumed its business.

As to whether I've ever personally crossed paths with a heruka -- possibly. The problem is that no one knows for certain what a heruka actually is, although a very advanced tantric practitioner can be called a heruka. But to give some idea of the confusion surrounding the term --


The Sanskrit term Heruka was translated into both Chinese and Tibetan as "blood drinker," which scholar Ronald Davidson calls "curious," speculating that the nonliteral translation derived from an association the term has with cremation grounds and 'charnel grounds' (Sanskrit: śmāśāna) (which absorb the blood of the dead) ...

Curious is right. From the Rigpa Wiki entry on herukas:

According to a tantra:
He stands for great compassion.
Ru means the absence of gathering.
Ka means not abiding in anything whatsoever.[1]

In the Zindri, Khenpo Ngakchung says that, according to Patrul Rinpoche, heruka means "one in whom absolute space (he) and primordial wisdom (ka) are united.

So how did one in whom absolute space and primordial wisdom are united get to look like this? 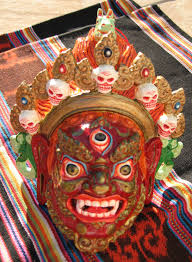 That is typical of the depictions of wrathful deities one can find at Google Images. So imagine something looking like that ordering a beer and the barkeep demanding payment, which explains that if the heruka in the story was also a wrathful deity he was incognito.

How wrathful deities got to be classed with or as herukas is a very long, hideously complicated and completely confusing history of tantric Yoga (both 'Hindu' and 'Buddhist') in India, Tibet, and China, and Japan. Which over the span of more than a thousand years was translated into God Knows how many languages and dialects. If I recall the Heart Sutra was composed by a Chinese in China in a Chinese language, then only later taken to India and translated into Sanskrit.

Then of course these languages and dialects evolve or fall into disuse and their precise referents get lost in the mists of time, leaving the next batch of translators to guess.

To pile confusion on top of confusion, at any one time there are maybe only 200 20 people who have sufficiently mastered Sanskrit to adequately translate it.

To pile on even more confusion, the Muslim invaders tore entire chapters out of Indian history. This was something that wasn't fully appreciated until the Tibetan diaspora, when Indian scholars discovered to their amazement a part of Indian history preserved by the Tibetans that the Indians didn't know had existed.

He was trying to explain his encounter with the psycho-epistemology of Western reasoning:  a step-wise stringing together of concepts that are dependent on each other for their causes.

So do not wonder at my reply when a Rinpoche who is head of a Vajrayana (Buddhist tantric Yoga) lineage asked for my opinion on the present state of Buddhist teachings:

"You can take all the teachings and throw them in the sea. What people need is the sight of a Buddha."


This was met with disapproving clicks of the tongue from the gathered monks but after pondering the Rinpoche answered, "I agree with you."

So what to do in the meantime, if anyone asks you for the definition of a Buddha -- or a heruka?

Well, um, you can always belt out a few stanzas from the Prajñāpāramitāhṛdaya, "The Heart of the Perfection of Understanding," the best-known Mahayana Buddhist sutra, generally referred to in English as "The Heart Sutra," which is sung in part in Sanskrit in the above video:

yad rūpaṃ sā śūnyatā; ya śūnyatā tad rūpaṃ
Whatever is emptiness, that is form ...