The Sack of New York

First came the Gauls, then the Visigoths, then the Vandals, then, then --
Raccoons walking across a yard in Queens 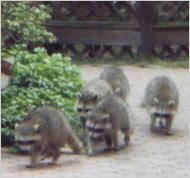 Clearly massing for an attack, of the kind described by Queens resident Carol Aiello:

One morning not long ago, she caught one of them staring at her from a neighbor’s roof gutter and all of a sudden — perhaps for no reason other than seeing those black-rimmed eyes so close and in broad daylight — she panicked.

Not even New York politicians are safe:

Assemblywoman Cathy Nolan of Queens said that seven raccoons sauntered among the guests at a Fourth of July street party in Ridgewood, mystifying children, terrifying parents and nearly ruining the celebration.

Assemblyman Michael Miller, also of Queens, said that he stopped to make a call from his driveway the other day and a pair of raccoons ran under his car.

Sherry Ortega, 42, who lives on 68th Avenue in Glendale, not far from Ms. Aiello, said raccoons so often drank from her pool she was too scared to let her sons swim at night. “To the raccoons,” she said, “our pool is the local watering hole.”

Al Costello, 81, who lives nearby, said that a raccoon killed one of the stray cats Mr. Costello had fed for years. Another neighbor, Mary Borzelino, 73, said she no longer spent her evenings sitting on her stoop because of the raccoons.

“Years ago, people thought this was cute. Well, it’s not cute when a raccoon is scratching at your door at 2 in the morning.”

And that, he said, is what raccoons have been doing in his district in the northern Bronx.

So what is to be done to protect residents of Brooklyn, Bronx, and Queens from being murdered in their sleep by advancing raccoon hordes?

These encounters between humans and beast have become so commonplace that City Councilwoman Elizabeth S. Crowley thinks it is time the city takes a tougher stand. She has introduced a bill requiring the health department to remove raccoons from public and private property whenever someone asks the agency to do so. ...

Ms. Crowley’s bill would force the city to devise a way to humanely dispose of raccoons and not, say, kill them, as authorities did to hundreds of geese in Prospect Park that were deemed a potential threat to airplanes. “The department of health would capture the raccoons and move them elsewhere, maybe to some rural area,” she said.

As to the fate of the raccoon that terrified Ms Aiello, she got no response from her calls to 311 and Animal Care and Control, which only shows up when an animal with rabies is reported.

[H]elp arrived only after two police officers from the 104th Precinct station house drove past and decided to tackle the task.

They picked up a hose and sprayed the raccoon with water until it scampered out of the gutter, slid down the side of the house and ran toward nearby railroad tracks.

Quotes are from Fernanda Santos's report for The New York Times titled Bedbugs, Meet Your Competition: The Dexterous, Not Easily Daunted Raccoon. The first photo is from the original version of Santos's report -- and to give you an idea of where the Times editor stood, the photo caption described the raccoons as "creeping" across the yard.