"We do not want the Taliban to come and cut the noses off our women. We don't want the Taliban to destroy what is left of our historical heritage. We think if we do not rise today, our rights, our very basic rights in a deal with Taliban, will be violated fundamentally." - Amrullah Saleh

MORDOR ASCENDENT, THE OPERA
The lords move to quash an uprising

By 2004, the US had filmed Pakistani army trucks delivering Taliban fighters at the Afghan border and recovering them a few days later; wireless monitoring at the US base at Bagram picked up Taliban commanders arranging with Pakistani army officers at the border for safe passage as they came in and out of Afghanistan. Western intelligence agencies concluded that the ISI was running a full training programme for the Afghan Taliban, turning a blind eye as they raised funds in the Gulf and allowing them to import materiel, mainly via Dubai. By 2005 the Taliban, with covert Pakistani support, were launching a full-scale assault on Nato troops in Afghanistan and being given covering fire as they returned to their bases in Pakistan.
-- William Dalrymple, 23 August 2010

It's had a 100-point inspection. My wife drives one just like it.

Brummitt went on to report that although Karzai and Zardari discussed ways to tackle the Afghan Taliban sanctuaries and training grounds inside Pakistan, they did not say whether any formal agreements had come out of the conversation. A few paragraphs later, after observing that for several weeks Karzai and other Afghan officials had been stepping up their calls for Pakistan to go after the Afghan Taliban, Brummitt got down to brass tacks:

"We need more security cooperation between our intelligence and their intelligence, which Pakistan is willing to offer," said Zardari.

It was not clear, however, if the offer was endorsed by Pakistan's military and intelligence establishment, which dictates the country's foreign and security policies, especially in regard to Afghanistan and arch enemy India. Many analysts say it wants to keep Afghan insurgents as proxies to secure its interests in Afghanistan when the Americans withdraw. ...

It's had a 100-point inspection. My wife drives one just like it.

As to what emerged from the meeting, which was termed "unprecedented" for the number of key players, the ISI spokesperson and the U.S. embassy would not comment. State wouldn't comment because first of all it wasn't an official meeting, despite all the officials involved. But more to the point State wouldn't comment because Petraeus & Co. got nothing -- zero, zip, squat -- out of the meeting.

I think only one major English-language Western press outlet, the Express Tribune, bothered to report on the meeting, which from the report was spun by unnamed officials as signaling Pakistan's agreement to back 'Karzai's plan' to reintegrate Taliban into Afghanistan's government. Pakistan's agreement on any such matter is worthless, as everyone knows; Rawalpindi will slip as many Taliban as they want into Kabul's regime.

Pakistan's Prime Minister Yousaf Raza Gilani, who carries more clout than Zardari, managed to squeeze time into his schedule to meet with Karzai and "assured" him that he had "Pakistan’s full support to the Afghan reconciliation plan." Beyond that:

Both leaders agreed to strengthen the tripartite dialogue between Afghanistan, Pakistan and Isaf forces and pre-empt efforts by vested interests to poison the cordial relations between the two neighbours.

In short, "top" U.S. intelligence officials ran up a fuel bill on the taxpayer dime to jet into Islamabad for the buffet at the five-star hotel where the unprecedented meeting took place.

We don't sell used cars in this dealership

The only meetings of importance about Afghanistan will occur shortly, when Saudi intelligence chief Prince Muqrin Bin Abdul Aziz (photo above) arrives in Pakistan. He will be negotiating with high-level Taliban leaders on behalf of Karzai and ISAF. In meetings at various 'safe houses' Aziz will start to hammer out power sharing deals between the Taliban leaders and Karzai's regime.

As to how a Saudi prince landed in the thick of negotiations -- the Asia Times Online, which couldn't resist rubbing it in, chose the date of September 11 to reveal that high-level Pakistani sources had told their bureau chief in Islamabad, Syed Saleem Shahzad, that Pakistan's military and the Saudi government had the central role in the backchannel negotiations with the Afghan Taliban -- and with al Qaeda in Pakistan.

Some of the statements Shahzad passed along are more probably items on Kayani's wish list, such as getting the Saudis to repatriate Osama bin Laden, but the gist of the revelations in his report is accurate.

So if it was a foregone conclusion that the September 15-16 meetings in Islamabad were worthless, why put on the show? 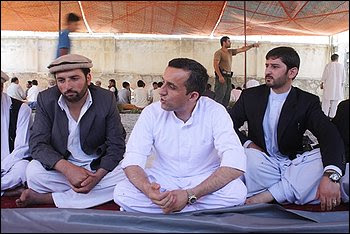 The above photograph of Saleh was taken by the Washington Post's Joshua Partlow in July, little more than a month after Saleh's resignation on June 6 as NDS chief. From Partlow's accompanying report:

The man who served as President Hamid Karzai's top intelligence official for six years has launched an urgent campaign to warn Afghans that their leader has lost conviction in the fight against the Taliban and is recklessly pursuing a political deal with insurgents.

In speeches to small groups in Kabul and across northern Afghanistan over the past month, Amarullah Saleh has repeated his belief that Karzai's push for negotiation with insurgents is a fatal mistake and a recipe for civil war. He says Karzai's chosen policy endangers the fitful progress of the past nine years in areas such as democracy and women's rights.

"If I don't raise my voice we are headed towards a crisis," he told a gathering of college students in Kabul. ...

On September 17, the day after the two-day gabfest in Islamabad, The Australian's Amanda Hodge reported from Kabul on the fruit of Saleh's summer of barnstorming:

A push to establish Afghanistan's first formal political opposition out of the ashes of the old Northern Alliance is gaining momentum. The campaign is being led by the country's former intelligence chief Amrullah Saleh, who resigned this year in protest at President Hamid Karzai's plans to negotiate with the Taliban and to pardon up to 400 insurgents.

With the US-led NATO alliance flagging a drawdown of troops from July next year, Mr Karzai is pushing for negotiations with the Taliban that will end the crippling and bloody nine-year insurgency.

Afghan analyst turned parliamentary candidate Haroun Mir told The Australian yesterday a core group of Karzai opponents were committed to establishing an opposition that could speak for ordinary Afghans who opposed the Taliban.

He outlined a global fundraising strategy that would draw on contributions from Afghans across Australia, Europe, Canada, the US and Britain, along similar lines to that which fuelled the separatist ambitions of Sri Lanka's Liberation Tigers of Tamil Eelam for more than three decades.

Unlike the money Tamil separatists collected from the Tamil diaspora, funds raised by the Afghans will go toward the creation of a true opposition political party -- something that Afghanistan's fledgling democracy has lacked:

Dr Abdullah said [on September 16] he was backing more than 300 of the 2580 candidates running for the 249 lower house seats this Saturday and had helped many fundraise for their campaigns.

"If, by the summer of next year there's no tangible progress (in the war against the Taliban), then everybody will start moving towards a political settlement and then who would be able to represent the majority of Afghans who are opposed to the Taliban?" Mr Mir told The Australian.

"There's no voice for them. Our hope is that this movement cuts across the country and includes all Afghans. Politics until now has been based on ethnic and geographic affinities. I hope this time it will be broader.

It will be broader, with Amrullah Saleh leading the effort. No one knows that better than officials in the Pentagon and the Obama administration -- and the Saudi and Pakistani regimes.

Thus, the U.S.-orchestrated dog and pony show in Islamabad last week, and the haste with which Saudi Arabia's intelligence chief is being dispatched to Pakistan.

The stage falls dark. Then a small spotlight; The Fool appears and asks mockingly, So, children of the Allies, how did you travel in the space of one generation from Middle Earth to Mordor?

Related Pundita Posts
Amrullah Saleh versus Mordor
NO COMPROMISE
Alden Pyle in Pakistan Part 1 and Part 2
Caste in Pakistan ...
He ain't heavy, he's my genocidal, hallucinatory, two-faced ally
David Petraeus might study Kashmir ...
How to kill a lot of Taliban
Why General Stanley McChrystal is going straight to hell

Pepe Escobar remembers his adventures in Talibanistan
Part 1: Throw these infidels in jail
Part 2: The degree zero of culture
Part 3 Married to the Mob
Posted by Pundita at 9/19/2010 05:58:00 AM