"He influenced innumerable musicians, and remains one of the most significant tenor saxophonists in jazz history. He received many awards, among them a posthumous Special Citation from the Pulitzer Prize Board in 2007 for his 'masterful improvisation, supreme musicianship and iconic centrality to the history of jazz.'

"The influence Coltrane has had on music spans many different genres and musicians. Coltrane's massive influence on jazz, both mainstream and avant-garde, began during his lifetime and continued to grow after his death. He is one of the most dominant influences on post-1960 jazz saxophonists and has inspired an entire generation of jazz musicians.

"His revolutionary use of multi-tonic systems in jazz has become a widespread composition and reharmonization technique known as "Coltrane changes".

"Sheets of sound was a term coined in 1958 by Down Beat magazine jazz critic Ira Gitler to describe the new, unique improvisational style of John Coltrane.

"Coltrane employed extremely dense improvisational yet patterned lines consisting of high speed arpeggios and scale patterns played in rapid succession: hundreds of notes running from the lowest to highest registers. The lines are often faster than sixteenth notes, consisting of quintuplets, septuplets, etc., and can sound like glissandos. ... What this analysis cannot describe is the profound, urgent, intense, soulful, tumultuous emotion of the music, which is its real driving force and which went on more and more to dominate Coltrane's work.

"As his career progressed, his music took on an increasingly spiritual dimension. Coltrane's spiritual journey was interwoven with his investigation into world music. He believed not only in a universal musical structure which transcended ethnic distinctions, but in being able to harness the mystical language of music itself.

"Coltrane's study of Indian music led him to believe that certain sounds and scales could 'produce specific emotional meanings. According to Coltrane, the goal of a musician was to understand these forces, control them, and elicit a response from the audience.

"Coltrane said: 'I would like to bring to people something like happiness. I would like to discover a method so that if I want it to rain, it will start right away to rain. If one of my friends is ill, I'd like to play a certain song and he will be cured; when he'd be broke, I'd bring out a different song and immediately he'd receive all the money he needed.'

"The Saint John Coltrane African Orthodox Church in San Francisco has claimed Coltrane as a saint since 1971. Its services incorporate Coltrane's music, using his lyrics as prayers." 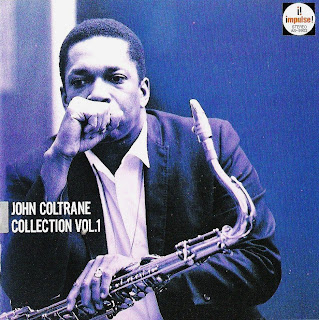 My favorite picture of Trane,
from an album cover

I like to think that somewhere,
he's jamming with Bird and Bach.
Bebop, fugue, sheets of sound.
Now that would be a jam session.

Best intro to Trane?
Oh, I don't know.
Try My Favorite Things, the
live version, Newport Jazz Festival, 1963. The version for the studio recording album, which also features his riff on Gershwin's Summertime, is great too.