Her mother, Rasoatahina Lovasoa, gave her only rice and the water it had cooked in. “It makes me feel sad to see how much shorter she is,” says her mother. “I’m trying to give her a better diet now.”
SEARCH FOR SOLUTIONS
"Droughts and famines tend to afflict countries in cyclical fashion. But where chronic malnutrition is endemic, such as in Madagascar, they strike harder. Health education is a start, aid groups say – but adjusting priorities is important, too." Part 3 of the Christian Science Monitor's series on building famine resilience.

Part 1 -  In Ethiopia, model drought defenses are put to the test

JULY 26, 2017  ANTSIRABE, MADAGASCAR—Battered by drought and civil wars, more than 20 million people from Yemen to Tanzania are at risk of starvation in what aid workers call the largest humanitarian crisis since World War II. But over the past two decades, nations that once produced searing images of famine's toll have moved to thwart it by strengthening community resilience. Our reporters traveled to Madagascar, Ethiopia, and Somaliland to investigate the daunting challenges as well as the long-term efforts that are saving lives. 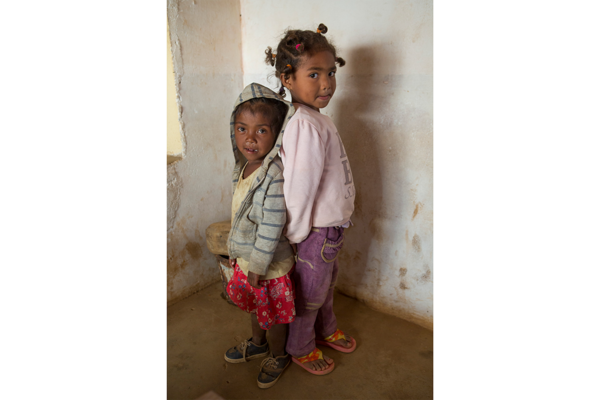 Rova (l.), a chronically malnourished almost-5-year-old girl, stands next to her friend Jiana Rakuturammambason, who is 'normal' sized for age 5, at a local health clinic in Antsirabe, Madagascar. 47% of children in Madagascar are chronically malnourished - the percentages are higher here in the highlands despite a good variety of food being available.
Photo: Melanie Stetson Freeman/CSM Staff

Madagascar fights the subtler side of hunger: chronic malnutrition

You can tell right away that there is something different about Rova. For a start, the 5-year-old is more than a head shorter than her playmate Jiana, though the girls were born only a month apart.
And where Jiana is solid – you can feel her presence as she and Rova chase each other around a health center in this highland farming town – there is a fragile, ethereal sense to the impish Rova.
Rova, like nearly half of under-fives in Madagascar, was chronically malnourished as a baby. Her mother, Rasoatahina Lovasoa, gave her only rice and the water it had cooked in. “It makes me feel sad to see how much shorter she is,” says her mother. “I’m trying to give her a better diet now.”

The situation is “sad, overwhelming and unacceptable,” says Prime Minister Olivier Mahafaly.
It doesn’t have to be like this. Intervention comes at a fairly low price: $400 million – not much more than one of the “Pirates of the Caribbean” films – would pay for a 10-year program to iodize salt, fortify wheat flour and oil with micronutrients, and teach pregnant women and young mothers what to feed their babies, says UNICEF’s nutrition investment plan. If the plan were put into action, chronic malnutrition would end up affecting just 15 percent of Madagascar’s toddlers instead of nearly half of them, the agency says.
But the challenge – and potential solution – lies not just in funding, but in changing attitudes. Health education is a strong start. But in this heavily agricultural country, where 92 percent of the population lives on less than $2 per day, parents may well feel that any extra bit of food not needed for survival is most useful if it can be sold for money. Persuading them that there is greater long-term value in providing their children with a healthy diet is key.
[PHOTO]
Nirina Razafiarisoa, a young woman with a nine-month-old son at her breast, says she has been getting nutrition advice from women at her local health center for the past 18 months. “I’ve learned lots of things” about how to feed her son and 2-year-old daughter, she says.
But she makes a living by selling soup from a tureen that she drags around her neighborhood on a cart – and that living is thin. “I do what they tell me to do when I’ve got the money, and don’t when I haven’t,” she explains. “I cook the sort of meals they recommend about twice a week, I suppose.”

For other families, however, ignorance about nutrition is the first hurdle. “When they eat rice and a leafy vegetable or a potato, people think they have eaten properly,” says Leonide Rasoahenikaja, a nutritionist working with UNICEF. “And they have no idea how good soybeans are for kids,” Dr. Rasoahenikaja adds. “Farmers feed it to their cattle and their pigs, and they see milk production go up and their pigs getting fat, but it does not occur to them to give it to their children.”
That’s why a dozen or so mothers – and one young father – were lined up on benches along the walls of a simple clapboard, cement-floored room on the outskirts of Antsirabe one recent morning, their babies in their arms. They were listening to a woman give a nutrition class.
[PHOTO]
The women chanted the advice in unison, reading it from an illustrated poster on the wall, before lining up to have their babies weighed and measured. Most of them were doing well, but it is the babies whose mothers do not attend this kind of class that worry Rasoahenikaja. The chronic malnutrition rate among under-fives in Madagascar has hovered around the 50 percent mark for more than a decade, she says, and nothing yet has budged it.

If the UNICEF plan gets off the ground, that might make a difference. But in the meantime, it is more a matter of small-scale projects at the village level teaching mothers what to do and helping them to do it, one day at a time.
In Ambohitrimanjato, for example, a sleepy village of mud-brick houses overlooking rice paddies, women are learning to use solar dryers – simple glass boxes fitted with slatted trays – to desiccate fruits and vegetables so that they can be stored and eaten long after they have been harvested. 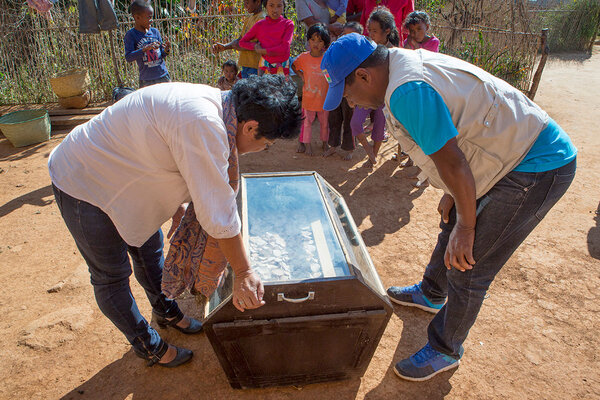 People examine a food drier that was donated by a local nonprofit and funded by the World Bank in Ambohitrimanjato, Madagascar. Dried fruits and vegetables will keep until out of season. Photo: Melanie Stetson Freeman/CSM Staff

“We’ve dried taro, squash, carrots, and bananas,” says local villager and nutrition outreach worker Razafi, a wizened lady who goes by one name. “It’ll be good for the children’s diet, too. We can dry potatoes and grind them up to make flour, and then we can make potato fritters.”
That’s the kind of talk that warms Rasoahenikaja’s heart. “The area around Antsirabe is the breadbasket of Madagascar,” she says. “Everything grows here but farmers often prefer to sell their vegetables than give them to their children.”
“If we are going to get rid of chronic malnutrition, kids’ food needs to be a priority,” she insists. “It isn’t for a lot of families, and that is not going to change in just a year or two.”
[END CSM REPORT]
********
Posted by Pundita at 7/29/2017 04:05:00 AM