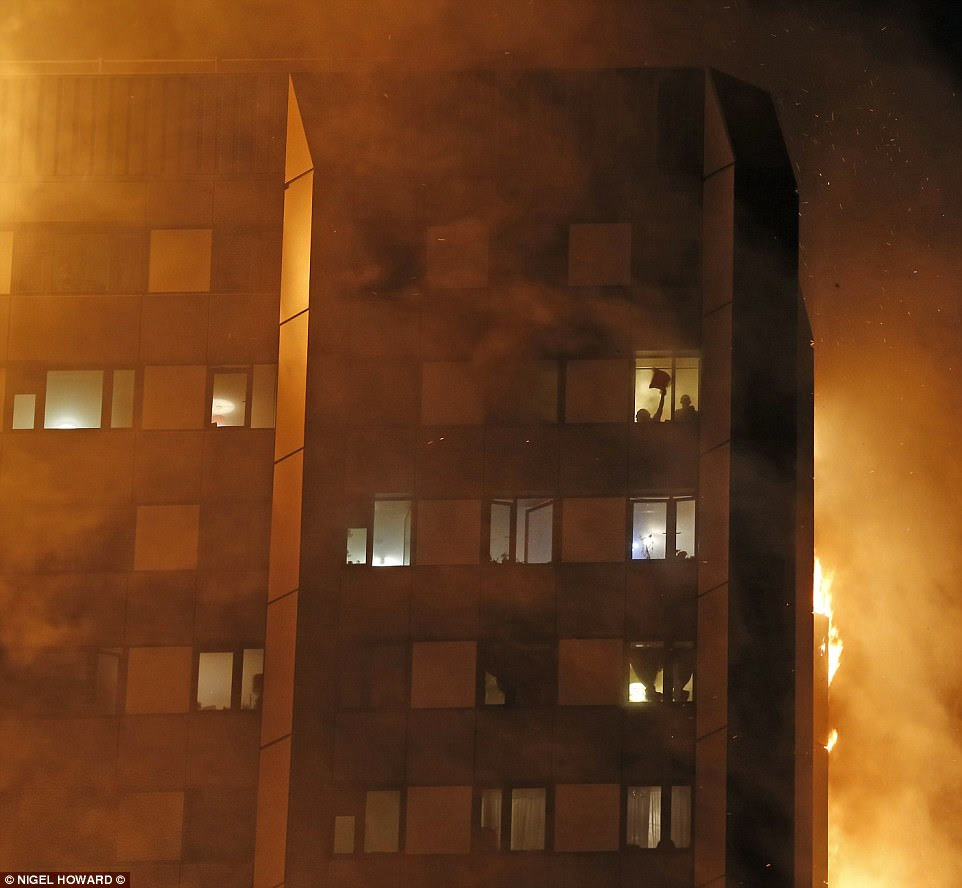 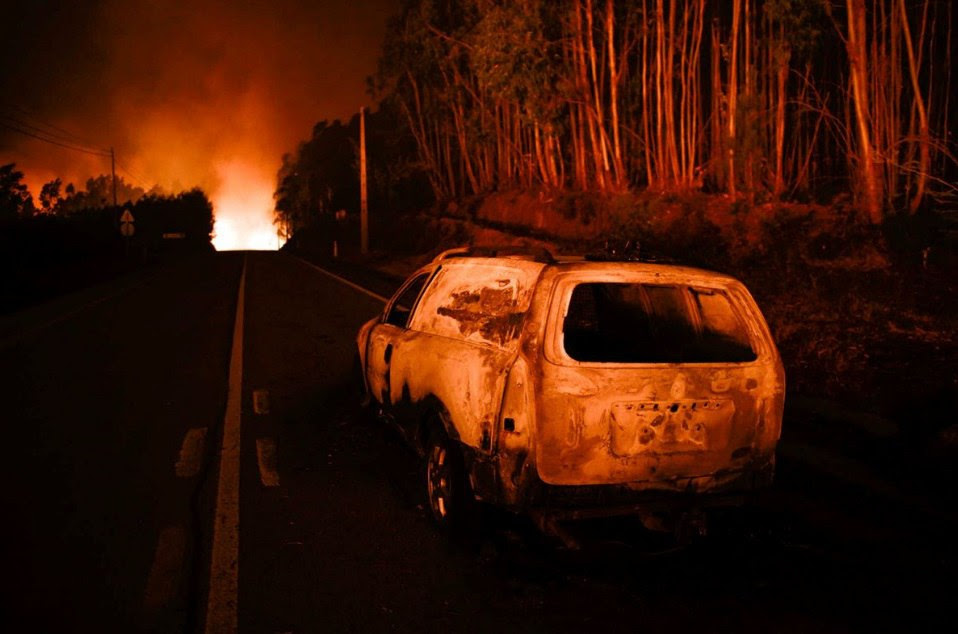 
A series of four initial deadly wildfires erupted across central Portugal in the afternoon of 17 June 2017 within minutes of each other, resulting in at least 64 deaths and 204 injured people. The majority of deaths took place in Pedrógão Grande when a fire swept across a road filled with evacuees escaping in their cars. Portuguese officials dispatched more than 1,700 firefighters nationwide to combat the blazes. ... Although most official reports point to a dry thunderstorm as the cause of the tragedy, the president of the Portuguese Firefighters League expressed his conviction the fire was provoked by arsonists. [Wikipedia]

Whether or not the Pedrógão Grande wildfire was a case of arson, and even though high temperature and winds contributed to the fire's spread, it moved with astounding speed, overtaking people who fled in their motor vehicles.

On June 20 a reporter for The Los Angeles Times named Lauren Frayer who was on the scene in Portugal explained why the wildfire moved so fast: Reeling from its deadliest forest fire, Portugal finds a villain: eucalyptus trees:

... But as its accomplice, environmentalists finger a newcomer, which has populated these hills as quickly as Portuguese have abandoned them for jobs in the city: eucalyptus trees.

Non-native eucalyptus and gum trees, with their medicinal fragrance and frosty blue-green leaves, now cover a quarter of all forested land in Portugal. First imported from Australia in the 18th century, they are among the world’s fastest-growing trees, and have become Portugal’s most common one — a profitable cash crop for paper and pulp. Portugal is Europe’s largest producer of eucalyptus pulp. It’s one of the country’s biggest exports.

But eucalyptus trees can exacerbate deadly fires. Their sap is flammable, and so is their bark, which flies off when burned, igniting new fires up to 100 yards away.

California has had a similar history with eucalyptus trees, which bore at least some of the blame for the second-deadliest fire in the state’s history — the 1991 Oakland hills fire that claimed 25 lives.

“Our climate is like California. It’s normal to have fires here. But with the introduction of eucalyptus, they have lots of material to burn,” said João Branco, with the Portuguese environmental group Quercus. Its name is Latin for “oak,” a native tree the group is lobbying to have planted instead of eucalyptus.

The Portuguese government has pledged to ban new eucalyptus plantations, but the law has not yet been finalized.

“The government was negligent. This was a predictable fire, because it’s very well known in Portugal, the problem of eucalyptus and its connection to fires,” Branco said. “Everybody knew this could happen. It was a matter of time.”

Tiny Portugal is one of the most heavily forested countries in Europe, and suffers more wildfires than its larger neighbors. Last summer, Portugal was home to half of the total acreage lost to wildfires across the European Union. Most of the land is privately owned, not managed by the government. ...

The Grenfell Tower fire started on 14 June 2017 at the 24-storey, 220-foot (67 m) high, Grenfell Tower block of public housing flats in North Kensington, west London. It caused at least 80 deaths and over 70 injuries. ... The fire started in a faulty refrigerator freezer in a fourth-floor flat. ... [Wikipedia]

Fire and police officials have not specified what went wrong, but extensive video footage shows the flames climbing the exterior of the building at a remarkable pace.

"I've never seen a fire like that in my life," said Joe Ruane, the former deputy chief fire officer for U.S. Air Force bases in Britain. "I've never seen that in a residential block."

... the fire seemed to climb the exterior of the tower so quickly that it overwhelmed protective systems like fire doors. ... [The Associated Press]

But even before the fire was fully extinguished London's Daily Mail was casting suspicion on the building's cladding as the reason for the astonishing speed of the fire's spread; other British press quickly echoed the Mail. While the official investigation may turn up more than one factor, the type of cladding used on the Grenfell Tower exterior wasn't designed for use on a high-rise; it was not fire resistant and by all accounts it "went up like a matchstick" in the Grenfell Tower fire.

However, even fire-resistant cladding attached to a high-rise would still be dangerous because of the chimney effect it creates.  From Wikipedia's article on construction cladding:

Cladding is the application of one material over another to provide a skin or layer. In construction, cladding is used to provide a degree of thermal insulation and weather resistance, and to improve the appearance of buildings. ...

Between the cladding and the wall there is a cavity where rain can run down. In the event of a fire this draws hot air up like a chimney, intensifies the fire, and spreads it to the top of the clad area. The fire can then get inside the building through open windows, for example [jumping] to curtains blowing through windows.

In addition to the chimney effect, the cladding material itself can contribute to a fire. ... In the wake of the Grenfell Tower fire in London and similar fires in France, Dubai, and elsewhere, great attention has been paid to the fire protection qualities of cladding used in tower-blocks and similar high-rise multiple-occupancy housing and, in particular, the use of aluminium composite material (ACM) and ACM panels (ACP).

Grenfell Tower was clad with composite panels with a polyethylene core which is thought to have contributed to the fire; these panels cost about £2 less than ones with incombustible core.

There are estimated to be about 600 high-rise blocks of flats in the UK that have "similar" cladding. Some fire safety tests—not full BS 8414 tests—were carried out on panels; of the first 75 tested, 100% failed. ...

There is much more about the Grenfell Tower fire. But the point for this writing is that any building contractor, public housing commissioner or fire inspector who dealt with Grenfell Tower must have known the apartment building was an inferno waiting to happen. Just as any Portuguese official connected with forest management or the agricultural sector would have known that all it would take was one lightning strike in dry weather to turn a eucalyptus forest into an inferno.

Yet when you drill down past the obvious  -- the corruption, negligence, and incompetence -- you find layers of complexity contributing to both tragedies. There is the long-running housing crisis in Britain, for example. And from a June 19 report from Reuters about the Pedrógão Grande wildfire:


Local residents said they had been without the support of firefighters for hours as their homes burned. Many blamed depopulation of villages that left wooded areas untended.

Both the housing crisis in Britain and large-scale abandonment of the countryside in Portugal for city jobs point to changes that had overcome the ability of the societies to absorb them. This points to a system failure, if you think of a society as a system.