Greek Catholic Patriarch, delegation in gesture of support for Assad 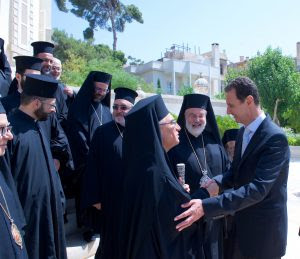 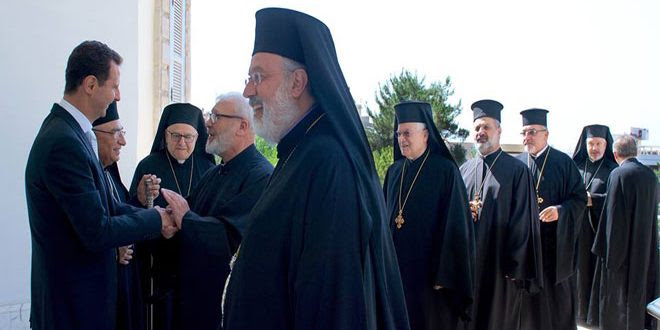 The meeting dealt with the situation in Syria in light of the terrorist war against it and the exceptional resilience shown by the Syrian people with all their components in the face of this war, whose outcomes will determine the fate of the peoples of the region as a whole.

For his part, President al-Assad affirmed that the Syrian people, through their adherence to their unity and diversity and their faith in their homeland, have succeeded in foiling the Takfiri terrorist war against them, which aims at fragmenting the homogeneous and integrated social structure that has characterized the Syrian society over centuries.

President al-Assad praised the important national role played by the Church to the effect of consolidating national unity in general and during the war, especially through strengthening the national sense of belonging in the face of the attempts to sow the extremist ideas and the adherence to the Syrian national roots and the security, unity and stability of the country.

In turn, Patriarch Joseph Absi and the delegation members expressed their confidence that Syria will achieve victory as it is now leading the human struggle against the schemes aimed at spreading extremism and terrorism and for the restoration of peace and security to its territory.

From Wikipedia (w/o source notes):

The Melkite (Greek) Catholic Church (Arabic: كنيسة الروم الملكيين الكاثوليك‎‎, Kanīsat ar-Rūm al-Malakiyyīn al-Kāṯūlīk) is an Eastern Catholic Church in full communion with the Holy See as part of the worldwide Catholic Church. The Melkites, Byzantine Rite Catholics of mixed Eastern Mediterranean (Levantine) and Greek origin, trace their history to the early Christians of Antioch, formerly part of Syria and now in Turkey, of the 1st century AD, where Christianity was introduced by Saint Peter. It is headed by His Beatitude Patriarch Youssef [Joseph] Absi, MSP.

The Melkite Church has a high degree of ethnic homogeneity, and the church's origins lie in the Near East, centered especially in Syria and Palestine. Melkite Greek Catholics are present, however, throughout the world due to migration. Outside of the Near East, the Melkite Church has also grown through intermarriage with, and the conversion of, people of various ethnic heritages as well as transritualism. At present there is a worldwide membership of approximately 1.6 million.

While the Melkite Catholic Church's Byzantine roots and liturgical practices are rooted in those of Eastern Orthodoxy, nonetheless the Church has maintained communion with the Catholic Church in Rome especially after its reaffirmation of its union with Rome in 1724.