Over-irrigating to quickly recharge aquifers. An abuse of science?

Too clever by half? 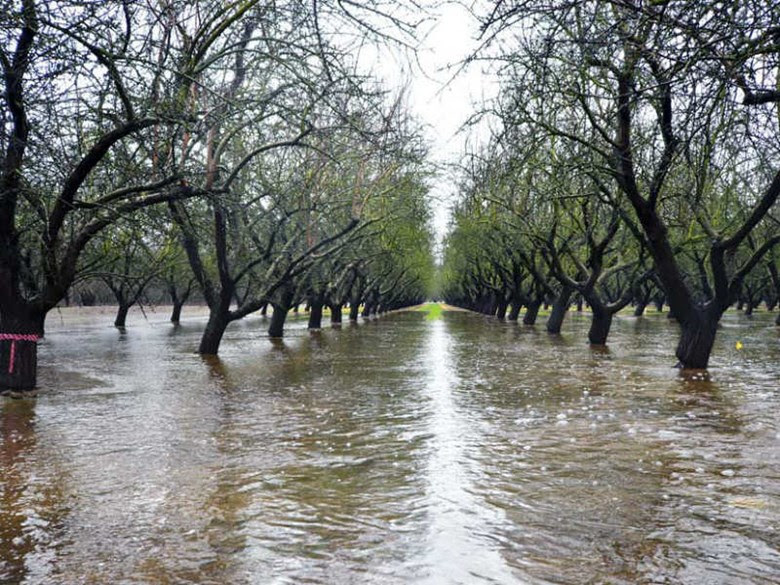 The other side of the almond orchard story Earlier this year a scientific study showed that during California's severe drought, farmers in the state's Central Valley agriculture belt pumped enough groundwater to fill Lake Mead, which can store the average flow of the Colorado River for two years. Or, as Capital Radio's May 2017 report put it, enough to drown the state of Pennsylvania in a foot of water.

One reason for all the pumping was the high temperatures during the drought, which increase the evaporative rate of water. Another reason was greed taken to the point of self-destruction. Farmers were able to make greater profits by substituting high-value orchard crops for row crops -- the problems being that orchards unlike row crops must be watered year-round, and that many tree crops are water hogs. The most infamous example is the almond tree; it slurps up a gallon of water per almond.  One consequence was that thousands of acres of almond trees were lost.

But in January 2016 Capital Radio reported on a scientific experiment to flood almond orchards to restore depleted aquifers in California:

[...]
On Nick Blom's farm in Modesto, water pours out of an irrigation valve. Pretty quickly, it begins to cover six acres of almond trees in standing water. Blom says normally he wouldn’t water the trees this time of year.

"I did have some concerns. You do risk root damage and other kinds of things that can happen to your trees," says Blom.

An aquifer lies about 45 feet under the surface. Blom had to use that water this summer when surface supplies were cutback in the drought. Now, he’s trying to restore it.

Blom says he's over-irrigating right now. "The trees aren’t using it. So you’re basically putting water on the soil," says Blom. "So you’re getting 100 percent of that water percolating down and it goes into the groundwater and now it’s in your water table."

Scientists at UC Davis are studying whether flooding almond orchards during the winter time can help pull California out of a chronic groundwater overdraft, at least in some areas. UC Davis hydrologist Helen Dahlke says soils have to be suitable for it – but researchers have mapped that out.

"There are between 3.6 and 5.6 million acres where groundwater recharge could be done most likely," says Dahlke.

Coincidentally it’s pouring rain on Blom’s orchards. But it’s these El Nino rains that farmers hope to use to deliberately flood fields. Blom says water from Modesto’s storm drains feed into a canal system that he can use on his orchards.

“If we weren’t doing this experiment all the water would just end up in the river,” says Blom.
It would end up in the Tuolumne River. But recharging groundwater this way is no easy task.

“It’s a great idea using agricultural fields to recharge the groundwater, but there’s a lot of ducks that need to be in a row and the first duck is that we don’t want to kill the trees,” says Ken Shackel with the UC Davis Department of Plant Sciences.

Another risk is that fertilizers could also seep into the groundwater. Shackel says farmers may need to change the way they operate.

“They may need to change the way they fertilize the trees so that by the time we get to the wintertime and the recharge events, then the water is fairly pure that’s in the ground," says Shackel. "Trees will use nitrogen. Nitrate is the big issue, but there’s a lot of other things too.”

This is the third time researchers have flooded Nick Blom’s almond orchard as part of the experiment. Helen Dahlke says they’re getting a good idea how quickly the water seeps into the aquifer.

“The first one has happened roughly two weeks ago and the water had infiltrated within 24 hours, it was gone from the surface,”says Dahlke.

By the end of the experiment, Blom’s almond orchard will have received nearly two feet of water. The Almond Board of California is funding the research, which involves three different orchards. Nick Blom says he’s hopeful the experiment will only bring benefits.

“It’s helpful. It’s a benefit to everybody because we do sit in a basin of water. So if we can put water into that basin throughout our area, it’s going to help everybody’s groundwater. So all the wells will be fine,” says Blom.

Researchers are hopeful too. Previous tests on alfalfa, grapes and pistachios showed it didn’t harm the crops or affect drinking water.

If the monster drought in California was a thousand-year event, I'd have no problem with the clever way that scientists hit on to recharge aquifers provided it really did keep fertilizers out of the water supply. But no amount of recharging will reverse subsidence -- land sinkage, which was profound in the Central Valley due to overpumping during the drought.

I am concerned that a relatively easy way to recharge aquifers will allow and encourage farmers there to continue with practices that are very destructive to the land.

And subsidence isn't the only issue. Since the drought developed there has been a debate, still unresolved when last I checked, about almond farming. It's the scale of the crop industry that is most troubling; 80 percent of the almonds sold globally are raised in California. This has meant that almond orchards have gobbled up a lot of land; in September 2016 Forbes published a report that pointed to perhaps the worst downside of the land conversion:

Watson, an assistant professor of geosciences at Eastern Kentucky University, is an expert in remote sensing. She uses satellite images to study agriculture, specifically the interactions between honeybees and industrial agriculture. At the beginning of this year she started a project with one of her graduate students, Larissa Watkins, looking at aerial photos of California almond farms. The goal was to predict how the rapid increase in almond orchards would affect demand for honeybee pollination.

But when they started processing satellite photos of California’s agricultural region taken between 2007-2014, they noticed a surprising trend.

Many areas that were classified as natural land cover—things like grasslands, wetlands and forests—were being converted to almond orchards.

“We were really shocked when we started looking at the data,” Watson says. “I was surprised this is happening in California with all the attention on the drought.”

So Watson and Watkins pivoted, deciding to put honeybees aside and instead quantify the land use changes and how they affected water use.

What they found was shocking: based on their estimates, 23,000 acres of natural land have been converted to almond farms. 16,000 of those acres were land previously classified as wetlands.

At the time of the Forbes report the research by Watson and Watkins hadn't been peer-reviewed and Watson qualified the findings by noting:


... aerial images can only paint broad brush pictures of what’s going on. Individual pixels in a satellite photo cover almost 1,000 square feet, making it hard to get a detailed understanding of the landscape. The USDA and the state government verified the land classifications in Watson’s data, but wetlands are notoriously difficult to identify via satellite and it’s possible that some of what looks like wetlands in aerial photos are actually flood-irrigated farmlands.

But her preliminary results show that the soaring demand for almonds, and the ensuing boom in almond farming, has had profound impacts on California’s agricultural landscape and water use.

It's not only cropland that's impacted. Wetlands are an important line of defense against the encroachment of ocean water on the land and against storm surges, a defense that had been failing at an alarming pace in California due to several factors, and even before the satellite study:


... more than 80 percent of intertidal habitat around the [San Francisco Bay] that might have been useful as a buffer to rising tides has been lost to development. It has been diked and drained for salt production and farming, or filled, paved and turned into highways, railroads, and sewage treatment plants. ...

From this side of the story, large-scale conversion of California wetlands to almond farming is another straw on the camel's back, and maybe a big straw.

By the way, a "storm surge" has the same impact on coastal land as a tsunami, the only difference is that "tsunami" is the name given to a tidal wave that results from an earthquake, whereas a storm surge describes waves from a storm at sea/an ocean.

I think all this and much more needs to be weighed before a clever scientific solution risks encouraging farmers to the idea they can have their cake and eat it too: routinely over-pump aquifers and later compensate by flooding fields and orchards.