Riviera wildfires: "All of France is mobilized"

Thousands of tourists evacuated to the beach last night 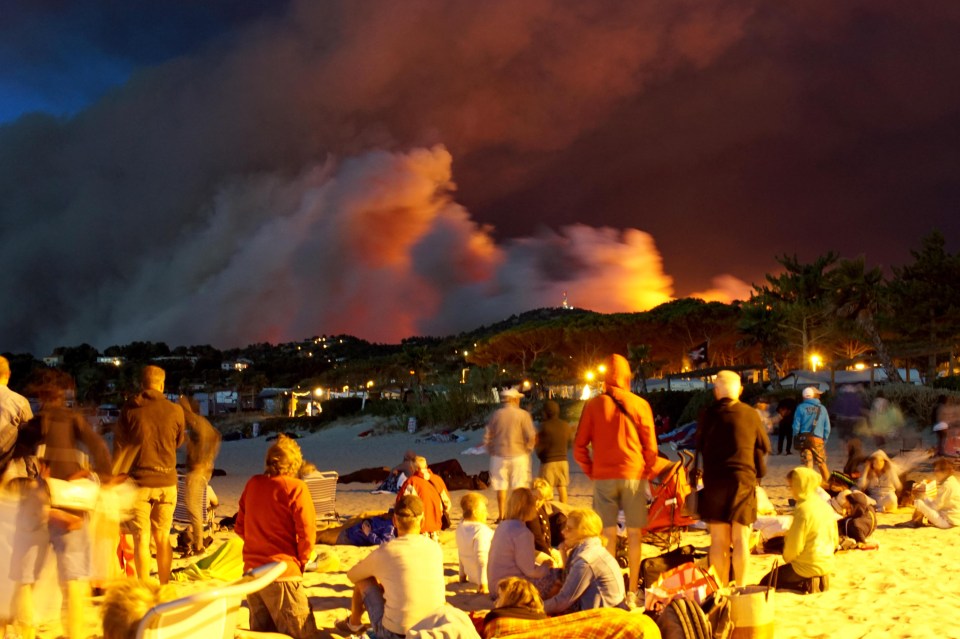 The photo is from The (U.K.) Sun, which has published scores of photographs of the wildfires and the evacuees, hundreds of whom are British.

High temperature, strong winds, which have been hampering firefighters, and lots of bone-dry brush are fueling the fires along the southern French coast. But there are underlying factors as well; from the following AFP report:


"Farmland is contracting and the forest is naturally expanding, making the area bushier. A proliferation in the numbers of homes, roads and power lines near forests also increased the fire hazard."

The good news is that so far there have been no human deaths or serious injuries related to the fires. A large number of turtles may have succumbed according to a source quoted in one of the reports today.

At least 10,000 people [12,000 according to The Sun], including thousands of holidaymakers, were evacuated overnight after a new wildfire broke out in southern France, which was already battling massive blazes, authorities said Wednesday.

The new fire broke out a day after France asked for Europe's help to tackle the flames already raging in several spots on the tinder-dry south, including near the popular resort of Saint-Tropez.Firefighters are also battling fires on the French Mediterranean island of Corsica and in Portugal.

About 3,000 of the evacuees in southeast France were holidaymakers staying in campgrounds, some of whom ended up spending the night in sleeping bags on the beach.

"The evacuations, at least 10,000, followed the progression of the fire. It's an area that doubles or triples its population in summer," said a fire service official of the blaze near Bormes-les-Mimosas on the Mediterranean coast.

The number of people on France's Cote d'Azur bulges in July and August as holidaymakers head to the beach, although the area is experiencing an exceptionally hot and dry summer that has made it especially vulnerable to fires.

On Tuesday over 4,000 firefighters and troops backed by 19 water bombers had already been mobilised to extinguish the flames, which have left swathes of charred earth in their wake.

At least 12 firefighters have been injured and 15 police officers affected by smoke inhalation since the fires broke out on Monday, according to the authorities.

The blazes on Tuesday had devoured around 4,000 hectares (15 square miles) of land along the Mediterranean coast, in the mountainous interior and on Corsica.

With strong winds and dry brush creating a dangerous mix, the government asked its European Union partners to send two extra fire-fighting planes -- a request immediately fulfilled by Italy, according to the EU.

But one union official denounced what he said was a lack of spare parts preventing all the aircraft required from being put into action.

Interior Minister Gerard Collomb announced on Tuesday that France would be adding six more firefighting planes to its fleet.

A fire in La Croix-Valmer near Saint-Tropez, a resort frequented by the rich and famous, had been contained, local fire chief Philippe Gambe de Vergnes said Tuesday.

But the blaze had already consumed 400 hectares of coastal forest in an area dotted with homes, he said. More than 200 people had to be moved from the area.

La Croix-Valmer's deputy mayor Rene Carandante described a desolate landscape of blackened headlands fringed by charred umbrella pines, where green forest had once framed the azure waters of the Mediterranean.

"It's a disaster area. There's nothing left," he said.

Francois Fouchier, of the local coastal conservation group, told AFP that local wildlife, such as the Hermann's tortoise, would be victims of the fires. "We are going to find burnt shells."

Around 80 kilometres (50 miles) inland, 300 hectares of pines and oaks went up in smoke near the village of Saint-Maximin-la-Sainte-Baume.

A local official accused the authorities of failing to regularly remove dry undergrowth, making the forest a fire hazard.

Corsica, situated midway between France and Italy, was also assessing the damage.

A resident, whose house had at one point been in danger, spoke of "apocalyptic" scenes.

In the end, disaster was averted after the wind died down, but the blaze engulfed 1,800 hectares of forest and burned several vehicles.

In Carros, north of Nice, a house, three vehicles and a warehouse went up in flames, according to regional authorities.

Speaking to France Info radio, local mayor Charles Scibetta described waking up to a "lunar landscape" and said residents had a lucky escape.

"All of France is mobilised," the head of the fire service in southeast France, Colonel Gregory Allione, told France Info, adding that extra firefighters had been drafted in from the north.

Thomas Curt, a director at the Irsea institute for research into the environment and agriculture, said a drop-off in farming in southeast France since the 1970s had made it more prone to fires.

"Farmland is contracting and the forest is naturally expanding, making the area bushier," he said.

A proliferation in the numbers of homes, roads and power lines near forests also increased the fire hazard, he added.

In mid-July, a blaze believed to have been ignited by a cigarette butt tossed out of a car ripped through 800 hectares of land near Aix-en-Provence.

Portugal, meanwhile, which last month suffered deadly forest fires, has been battling fresh blazes since Sunday in the centre of the country, forcing the evacuation of around 10 villages.