Despite the country's mild climate and fertile land, for decades most Greeks opted for better-paying, comfortable, jobs in the city. EU and government agricultural policies that hurt mostly small farm owners, the majority of Greek farmers, resulted in the speeding up of urbanisation with half of the country's population living in the two biggest cities, Athens and Thessaloniki. Land was either left uncultivated or tended to by poorly-paid migrant labourers.

The above is from a great Al Jazeera report titled Why are so many young Greeks turning to farming? It's because they're thinking smarter, that's why. And from what they learned about business from their time in the cities, they're farming smarter than their parents did.


Thodoris and other young Greek farmers have turned to organic farming as well as processing, bottling, and exporting their products themselves.

For years, Greek farmers didn't brand or bottle their olive oil. Instead, they'd sell it to Italy and Spain in bulk. There, it was bottled and sold as Italian or Spanish olive oil around the world. With the crisis, many Greek farmers decided to stop selling their olive oil in bulk and to instead bottle their own product, create a brand and market it around the world on their own.

"A surplus value is added to our agricultural products when we process and bottle them, so we can make a bigger profit," Thodoris explains. "This keeps us alive."

In the meantime a movement called "Without Middlemen" has sprung up. Since 2012, on sporadic Sundays, producers across Greece bring their products to the cities and sell them directly to consumers, maximising their profits and lowering costs for buyers who have been hit by the crisis.

Many farmers have also created websites to sell their products online. Thodoris sells his on his website and at small stores which promote local products and take less of his profit margin than big supermarkets.

Some have turned to new products like so-called "superfoods," such as certain nuts, berries, and whole grains. "Both in Greece and abroad, quality wins over price," Thodoris says.

Distribution has also changed. "Door-to-door and skipping the merchant are also ways for us to increase our profit," he says. "Everything changes from below, from the people. We go to exhibitions together to showcase our products. We advise each other."

As Al Jazeera explains the big obstacles for these entrepreneurs are Greek bureaucracy, outdated laws, and counterproductive tax increases on farming. But they are well aware of their importance and increasing power as a group:


"We, the young people in the primary sector, have the key to recovering from this economic crisis," Thodoris says. "We can do it, as long as we work together, and work hard."

The reader has to plow through several paragraphs about the problem of rampant cattle rustling arising from hydrological drought in Kenya to get to the point of U.S. News & World Report's Seeds of Success. But finally:


The only solution to the lack of grass, many believe, is to somehow grow more of it.

Elizabeth Meyerhoff, an American-born anthropologist who studied Kenya's Pokot tribe and her Kenyan-born husband Murray Roberts, have lived on the shores of Lake Baringo for decades. For more than 20 years they've been working with local communities to rehabilitate degraded grasslands and introduce the concept of managed, sustainable grazing.

Through their organization, Rehabilitation of Arid Environments (RAE) Trust, they have rehabilitated 6,000 acres around Baringo with natural, indigenous grasses on which different ethnic groups can graze their livestock.

Their hope is that communities will be able to decrease their dependence on naturally growing grass, which is often overgrazed and is easily depleted during times of drought.

Kwopin is a staunch believer in the organization's work. He first obtained seeds from RAE Trust in 2006, and he now harvests grass seeds to sell back to the organization for use on other plots.

"When I first started, people were laughing at me for trying to plant grass in an arid area such as this," Kwopin says. "But as I have succeeded, they have come to realize that it is good to have their own areas" on which to graze.

Kwopin is working to rehabilitate more than 200 acres of arid land, and he expects the grass will cushion his cattle from starvation. Unlike his neighbors, some of whom saw entire herds of livestock die from starvation during the recent drought, all but three of Kwopin's 20 cows survived.

So if you're looking to donate to an organization that goes by the philosophy "Teach a man to fish and you feed him for a lifetime," you might want to check out the RAE Trust website.

Now on to India, where Food Tank ("The think tank for food") starts off straight to the point:

The Doba-based Livelihood Program is an initiative of the Rajadighi Community Health Service Society (RCHSS) located in West Bengal, India that is helping small-holder farmers conserve water and mitigate against climate change. Dobas are small human-made pits or ditches that, whilst traditionally used for other purposes, can harvest direct rainfall during the wet season and provide much-needed irrigation to crops during dryer months. The reshaping and conserving of dobas within innovative farming communities in West Bengal has resulted in increased crop health and cultivation, supporting livelihoods and the agricultural economy of the region.

Here's a photo of a repurposed doba: 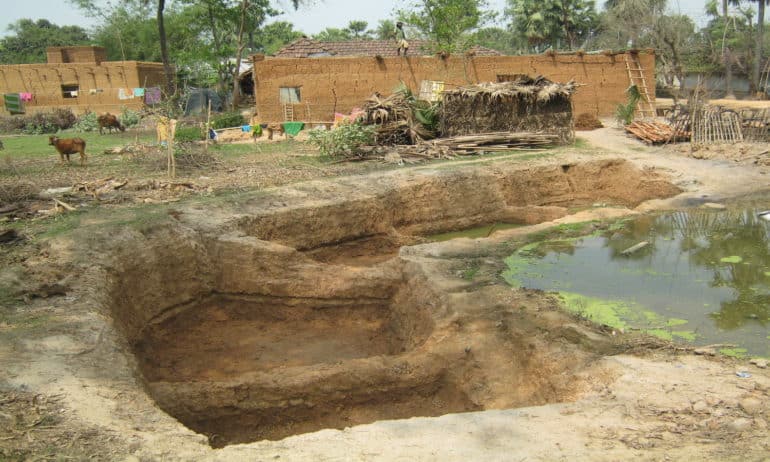 Researcher/activist Eva Perroni, the reporter for the FT article, then goes on to interview a RCHSS staff person, Shibesh Das, about the Doba-based Livelihood Program and "the impacts of climate change and drought in West Bengal." Here I'm going to jump to the last part of the discussion:


FT: What are some of the successes of the Doba extension program?

SD: Although the Doba extension program was launched in Mangalpura GP of Habibpur block, its success inspired farmers from other Gram Panchayats of the same Block to approach the organization to help them to revive the Dobas in their household lands and develop their own kitchen garden. Due to a resource crunch, the organization is not in a position to help them financially, but assists them to develop an alternative source of income that depended on these Dobas.

As most of the households in this block are small and marginal farmers, scarcity of water has tremendous impact on their agricultural economy. Most of the houses of these farmers are made of mud, and hence small depressions are quite common in their home premises. These depressions were overlooked by the community and were used as dumping grounds.

Today, under the MGNREGA program, some of the community members got these structures rejuvenated and are utilizing its water as groundwater recharge basins, irrigation to kitchen gardens, water provision for household requirements and sanitation purposes among others.

FT: What learnings can you take from this local Doba program to inform policy makers at the national level?

SD: Adapting and mitigating agricultural problems due to climate change is a major challenge, especially in a developing country like India, where the vast majority of farmers are marginal smallholder farmers, less educated, and have significantly lower adaptive capacity. As a result, one cannot expect autonomous adaptation.

There is no single approach to drought adaptation and mitigation, nor does one solution fit all regions or countries. Thus location-focused strategies are desired. Each region (e.g., agro- ecological zone) is unique regarding its geography, topography, socio-economic and climatic conditions; therefore, formulating strategies tailored to each locality or community should be given importance.

Further, strategies could be at different levels of government, for example, regional, national, sub-national and local levels. Adaptation at local level is the most critical issue as local actors are the ones that realize the severity of climate change.

Shibesh Das' remarks should be self-evident but cookie cutter, one-size-fits-all solutions have always been endemic in government and development-bank and international aid programs -- with predictable results. But when applied to problems arising from drought, the effects of this approach can be devastating.

Das' recommendations should and must become the guiding principle for every development and aid organization including ngos and charities that partner with governments and international entities such as United Nations aid programs. In these days of sophisticated computer programs and internet-based research there is no longer an excuse for the cookie-cutter approach to problem solving, especially when the most disadvantaged populations bear the full brunt of mistakes arising from the approach.

All right; we've looked at three places in the world where people are learning to think more intelligently about perennial problems affecting entire populations. More examples abound. Next up, a trip to an almond farm in
California.