Never give the Devil a ride, not even to save your currency or your country

Ready to warble? Okay, here's the tune, which even a tone-deaf possum can carry; I know this for a fact because I asked Charlotte to sing along:


When you're on the road to nowhere with a million miles to go
And you're lookin' for someone to share the ride ...

And see you see him in your headlights waitin' for some weary soul
And he's standing with temptation by his side ... 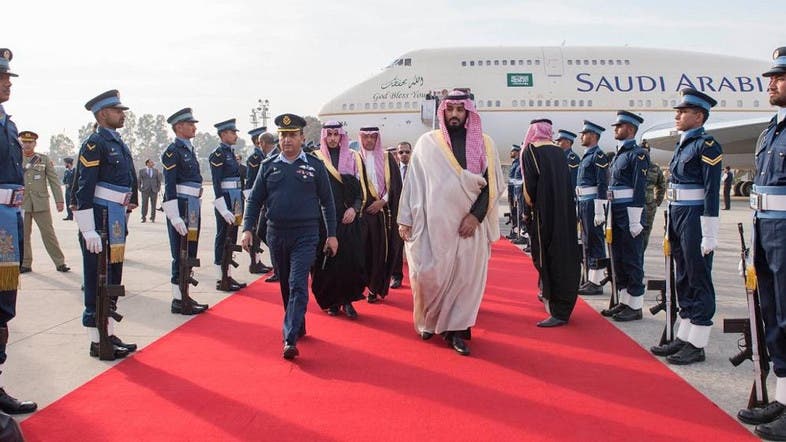 Never give the Devil a ride

Never give the Devil a ride

He'll be in that driver's seat as soon as he's inside

Washington lining up House of Saud for the chop? ISLAMABAD: Pakistan reaffirmed on Thursday its support to Saudi Arabia, which is embroiled in a tense standoff with Iran, and the counter-terrorism coalition that it (Riyadh) was setting up.
The reiteration of support for the Saudi government was made during a shortened visit by Saudi Foreign Minister Dr Adel Al-Jubeir to Islamabad for discussions on his country’s diplomatic row with Iran and the multinational coalition against terrorism it (Saudi Arabia) had announced.
“People of Pakistan held the Kingdom of Saudi Arabia in high esteem and also had deep respect for the Custodian of the Two Holy Mosques. … (they) will always stand shoulder to shoulder with the people of Saudi Arabia against any threat to its territorial integrity and sovereignty,” PM Sharif told FM Jubeir, while assuring him of Pakistan’s unconditional support.
Additionally, a media statement said the two sides discussed regional and global issues of common concern and agreed on promoting multi-faceted cooperation.

The Saudi foreign minister started his whirlwind tour of Islamabad with a meeting with Army Chief Gen Raheel Sharif at GHQ and then visited Prime Minister Nawaz Sharif at his residence before concluding the trip with a meeting with Adviser on Foreign Affairs Sartaj Aziz.
Mr Jubeir, who led a 17-member delegation, stayed in Islamabad for a little over six hours. His trip was officially described as a ‘working visit’.
He was to originally visit Islamabad on Sunday, but postponed it at the eleventh hour due to the storming of Saudi embassy in Tehran by protesters agitating against the execution of Saudi dissident Sheikh Nimr Baqir Al-Nimr.
As the Saudi foreign minister landed in Islamabad, protesters from various religious parties held a protest demonstration in the federal capital’s D-Chowk against Pakistan’s decision to join the Saudi-led coalition and execution of Sheikh Nimr.
The Foreign Office cancelled a planned joint press conference by Mr Aziz and Mr Jubeir to avoid possible media questions over the recent regional developments involving Saudi Arabia.
A statement issued by the Foreign Office said that Mr Jubeir talked about tensions with Iran during his meetings.
Pakistan, which had already con­demned the Saudi embassy incident, went a step further by noting it “believes in respect for international norms and adherence to non-interference”.

Besides the tensions with Iran, the Saudi foreign minister was said to have briefed Prime Minister Sharif on details of the counter-terrorism coalition.
Saudi Arabia had last month announced that it was establishing a 34-nation coalition to fight terrorism. The government at the time of announcement of the coalition, in which Pakistan had been included, conceded that it did not know much about the group, but still agreed to join it. It was also said that the extent of involvement in the activities would be decided after Riyadh shared the details.
Speaking to Mr Jubeir, Mr Sharif said: “Pakistan welcomes Saudi Arabia’s initiative and supports all such regional and international efforts to counter terrorism and extremism.”
During the delegation-level meeting the two sides led by the respective foreign ministers, agreed on engaging the clergy for formulating a narrative against extremism and terrorism.
[END] 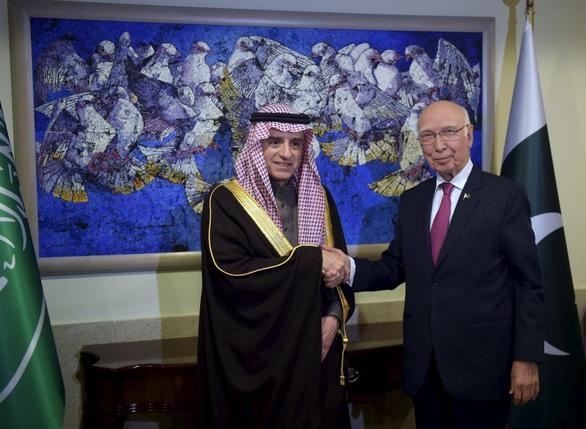 (Islamabad) Pakistani army chief Gen. Raheel Sharif has reiterated that any threat to Saudi Arabia’s territorial integrity will evoke a response from Islamabad.Sharif made the remarks Sunday in a statement after Saudi Deputy Crown Prince and Defense Minister Mohammed bin Salman called on him in the garrison city of Rawalpindi, adjacent to the capital.

Salman earlier arrived in Islamabad, making him the second top Saudi official to visit Pakistan in a week amid growing tension with Iran over Shiite cleric Nimr al-Nimr's recent execution.

The prince is also expected to meet with other Pakistani leaders. The visits came after Saudi Arabia and several of its allies announced the severing or downgrading of diplomatic relations with Shiite powerhouse Iran.