Sergey, please don't be upset we're stabbing Russia in the back 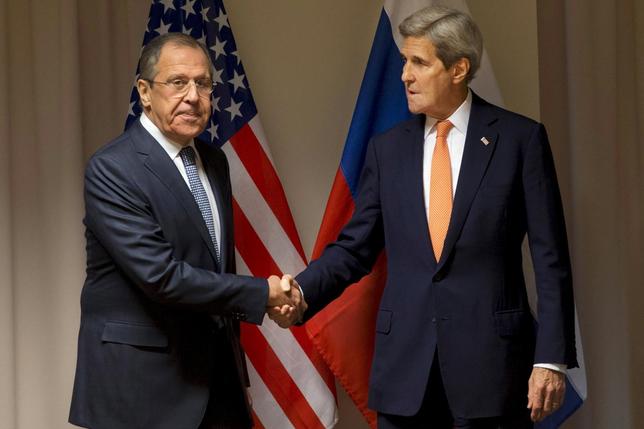 Reuters has a long-winded report on the meeting but it comes down this: The United States has staged a show called peace negotiations that works in favor of Saudi Arabia and its coalition, which wants to take control of Syria via proxy groups. Syria is a small price to pay, in the U.S. view, for improving relations with the disgruntled Saudis and their Gulf Arab partners.

The United Nations is going along with the show, even though the U.N. Special Envoy to Syria, Staffan de Mistura, knows he's presiding over nothing more than a macabre farce unless the Saudi coalition is completely excluded from the peace negotiations -- and that can't happen because of U.S. support  for the coalition.

What the United States has done is unconscionable. Knowing full well that many of the groups fighting the Syrian government differ from Islamic State and al Qaeda only in name and minor details. the U.S. agreed at the Zurich meeting that any truce worked out in negotiations between Assad's government and 'opposition' groups wouldn't apply to IS and Nusra, AQ's proxy in Syria. But then Kerry, working under orders from the White House, refused to agree to the exclusion of any other groups on the list Riyadh had presented. From RT's report; emphasis mine:


The negotiations will focus on such issues as the tasks of the transition period, preparation of the new constitution and early election, the FM said, adding that Russia, the US and other foreign players will only monitor the talks.

Lavrov was also asked whether Kerry and him had reached an agreement on the participation of the Ahrar ash-Sham and Jaish al-Islamin groups in the Syrian talks.

"We can say that there is no such agreement," the Russia's top diplomat replied.

Russia presented data on the terrorist nature of both groups to the US during the Zurich meeting, maintaining its stance that Ahrar ash-Sham and Jaish al-Islamin have no place at the negotiating table.

Ahrar ash-Sham “is known to have been repeatedly shelling residential quarters of Damascus and Russia's embassy. Ahrar ash-Sham is a child of Al-Qaeda," Lavrov explained.

However, the FM expressed confidence that UN Special Envoy on Syria, Staffan de Mistura, would be able to form a representative opposition delegation for the intra-Syrian negotiations.

As to the list of acceptable groups for the negotiation that was supposed to be finalized at the January 20 meeting between Kerry and Lavrov, it didn't happen. How, then, can the negotiations go forward, if there's no agreed-upon list of attendees at the meeting? From the Reuters report:


U.N. Special Envoy Staffan de Mistura spoke in an interview with broadcaster CNN, hours after U.S. Secretary of State John Kerry and Russian Foreign Minister Sergei Lavrov held talks in Zurich despite no sign of agreement on who should represent the opposition.

"We have no intentions to postpone the talks from January to February. This is both the position of Russia and the United States, and we are confident that in the next days, in January, such talks must start," Lavrov said.

"...This will be just the start, because of course it will take a lot of time, a whole range of arduous tasks are to be resolved."

Various dates were being mooted, but the final decision was for the U.N. Secretary General on the advice of de Mistura, he said.

De Mistura, asked if he was able to send the invitations to the talks, told CNN in the Swiss resort of Davos: "I can’t tell you today, I will tell you on the 24th, one day before."

If none of this is making sense -- everything makes perfect sense when you are certain you're dealing with scoundrels. Moscow is certain about what it's dealing with. So is Damascus.

Both know that Washington wants Syria blanketed with no-fly zones, to be accomplished by 'international humanitarian' organizations such as the International Red Cross delivering food aid to regions controlled by Nusra, IS, etc. That's why Washington, and Riyadh, want as many such groups included in the negotiations as possible: they know that part of the Assad goverment's agreement with opposition fighters is to deliver food aid to them once they stop fighting.

In short, the entire negotiation show staged by the U.S. is a backdoor way of aiding the hardline Islamist groups such as Nusra and the rest of the alphabet soup survive another day in Syria.

The same answer applies to both questions. It's because Washington doesn't want a military solution to Terror, Inc. and doesn't think one is possible.

A reporter for VOA told John Batchelor after the terrorist attack in Jakarta that 400 terrorists from Indonesia were fighting in Syria. A few weeks earlier a report at one of the Russian news sites mentioned that 400 fighters from Kyrgyzstan were on their way to Syria. The Syrian government has counted mercenaries from 100 countries fighting in Syria; the American government has counted 80.

The view of Damascus is that the hardliners can jolly well take their act somewhere else -- and that a military solution in this limited context is entirely possible. In short, the Syrian government isn't interested in keeping order in the entire world, just in their own patch.

So what's going to happen next?  Same thing that's been happening since the Russians and Syrian military got up to speed. Damascus is cutting its own deals with opposition groups without help from the United States thank you very much -- deals made at the point of the government's gun. This is the thinning the forest, so the Russian and Syrian bombers have a better fix on the mercenaries.

The Syrians and Russians will go along with America's show up to a point because in that way Damascus can always net a few more Syrian groups actually willing to lay down their weapons. Meanwhile the air campaigns and ground offensives grind on as in this example, reported yesterday by FARS: ISIL Raqqa-Aleppo Supply Route Cut in Syrian Air Attacks.

And the capitulations continue as reported yesterday, again by FARS:

TEHRAN (FNA)- The al-Nusra Front and ISIL militants started leaving Southern Damascus under a deal with the Syrian government that was signed and was due to go into effect last month but came to a halt after Jeish al-Islam top commander Zahran Alouch was killed in a Syrian air raid.

The al-Nusra Front and ISIL terrorists are now evacuating the neighborhood of al-Hajar al-Aswad,Yarmouk refugee camp and al-Qadam regions on Wednesday.

Under the agreement between the Syrian government and militants, over 4,000 terrorists are due to leave the Southern parts of Damascus and the Palestinian refugee camp.

The websites of the Syrian opposition had quoted the terrorists stationed in Hajar al-Aswad and Yarmouk camp as saying that the militants coming from Yalda, Babila and Beit Saham districts have joined them and therefore, the grounds have been prepared for the evacuation of the ISIL militants.

The evacuation operations in these regions had been postponed some weeks ago after the Syrian Air force carried out airstrikes on gathering centers and command posts of terrorist groups in Eastern Ghouta in Damascus Countryside in December, killing Zahran Aloush, the leader of the so-called Jeish al-Islam terrorists group and a large number of senior commanders of al-Rahman brigade and Ahrar al-Sham.

Ceasefire treaties to launch evacuation and relocation plans have started across Syria since the November.

But why cut deals with something like Islamic State? They're not exactly an opposition group. Damascus doesn't care what they say they are, as long as they give up all weapons except hand guns, stop fighting, and clear out of a particular region. As to what will happen to them later on, that depends entirely on them.