The Kremlin should stop trying to placate NATO regimes about Syria

"Those who remain in eastern Aleppo, roughly 40,000 from a prewar population estimated at about a million, have been without electricity or running water for more than a year."

-- From award-winning journalist Martin Chulov's on-the-ground March 12, 2015 report for the Guardian, The worst place in the world? Aleppo in ruins after four years of Syria war: In the east of Syria’s largest city, where entire neighbourhoods have been destroyed, the few remaining residents face a Darwinian fight for survival.

If there were 40,000 residents in E. Aleppo in early 2015, how is that a headline today from RT reads, Breakthrough in Aleppo saves 80,000 civilians – Russian military?

Not to be outdone Iran's FARS agency reported today that no less than 90,000 civilians had been rescued from E. Aleppo.

Meanwhile, AMN chief Leith Fadel's cousin Joseph, who is fighting for the government side in E. Aleppo, told him a few days ago that there were about 30,000 civilians left in east Aleppo, which Leith reported on his Twitter page. That was before several civilians in E. Aleppo were evacuated, in numbers ranging from about 3K to 10K, depending on the report.

So why is the Kremlin going along with the UN fish tale that there are at least 250,000 civilians trapped in E. Aleppo? For the same reason it's not putting up a fight about the reported number of hospitals the Russian/Syrian air forces have bombed in East Aleppo.

(Syrian Lina Abadi's droll comment on the strange phenomenon created by Western reporting known as The Last Hospital in E. Aleppo: "When a hospital in East Aleppo is destroyed, 10 new spring up in its place. - Syrian proverb.")

From the following passage in the RT report, I think it's obvious why the Kremlin believes it's necessary to attempt to placate NATO governments, at least long enough to finish helping the Syrian Army clear Aleppo of terrorist groups:

Earlier, head of the German Parliament’s Foreign Affairs Committee Norbert Röttgen, along with other MPs, called on Berlin to impose more sanctions against Russia over the offensive in Aleppo, and open an airlift to the militant-held areas similar to the historic Berlin airlift in the late 1940s. They cited damage allegedly caused to the city by Russian airstrikes. The strikes, according to the Russian military, were paused in mid-October and did not resume.

The German Foreign Ministry said Damascus and “its supporters, above all Russia and Iran, bear the biggest responsibility” for civilian suffering in Aleppo.


TRANSLATION: 'We're scared Erdogan is going make good on his latest threat to flood EU with more refugees and we don't want a war with a NATO member.'

Granted, Erdogan is furious that E. Aleppo is falling to Assad's government. But how does the EU threatening Russia solve their problem with Turkey?

Bottom line:  the more that Moscow, Damascus and Iran rack up success against people that Al Saud and Turkey want in power in Syria, the nastier the NATO/EU threats against Moscow -- and by implication, Damascus. And Iran.

But for the Kremlin to attempt to placate people who in turn are trying to placate other people is a waste of time. And it's giving points to the NATO/EU/Gulf Arab "Axis of Scoundrels" that it doesn't deserve.

For more of Lina Abadi's sharp observations, read her Twitter page. The propagandists are quick but she's quicker.  As to the Last Hospital in E. Aleppo -- from Lina: 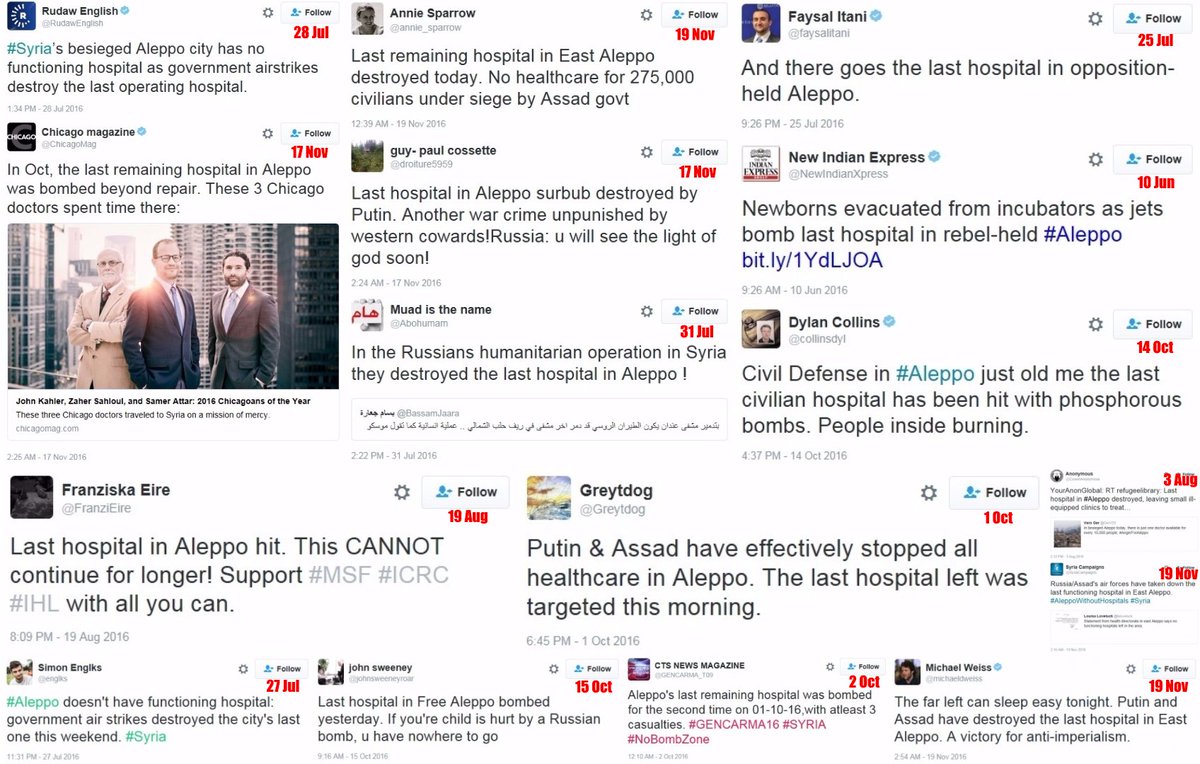