Le Pen: "The divide is not between the left and right anymore but between patriots and globalists" 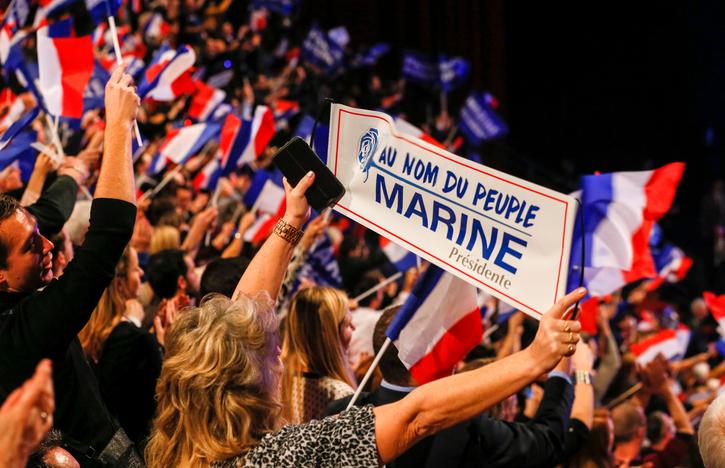 > Growing calls for Fillon to withdraw from the race.
> Le Pen, Melenchon and Macron are all trying to attract voters disillusioned with mainstream parties.
> "On paper" former economy minister Macron current favorite to win against Le Pen.

Lyon (AFP) - Far-right leader Marine Le Pen vowed Sunday she would be a president who puts France first as she formally launched a campaign echoing many of the themes that propelled Donald Trump to the White House.

With polls showing her now leading the first round of the election race, the head of the National Front (FN) attacked "mass immigration", globalisation and "Islamic fundamentalism" and said she wanted a country "which owes nothing to anyone".

In a speech in the central city of Lyon less than three months before voting begins, Le Pen praised Britain for choosing to leave the European Union and urged the French to emulate Trump voters "who put their own national interests first".

She compared globalisation to slavery, saying it meant "manufacturing with slaves to sell to the unemployed".

The FN "will be all about the local, not the global," the 48-year-old said to cheers from a crowd of around 3,000 people.

"The impossible is becoming possible," she said, "just as it's possible for presidents like Donald Trump to not only be elected in the face of a system ranged against them, but also that they keep their promises."

Opinion polls have shown for months that Le Pen will win enough votes in the first round on April 23 to reach the runoff, but they currently show she will be defeated in the second round on May 7.

With former investment banker Emmanuel Macron appearing increasingly likely to be her ultimate opponent, Le Pen told supporters that "faced with the cash-rich rightwing and the cash-rich leftwing, only I am the candidate of the people".

She was also referring to the previous frontrunner, conservative candidate Francois Fillon, who is embroiled in revelations his wife drew hundreds of thousands of euros in salary as his parliamentary assistant but never actually worked.

An incident at the Louvre museum in Paris on Friday, where a man wielding two machetes and shouting "Allah Akbar" (God is greatest) was shot after attacking a group of soldiers, has shifted the focus onto Le Pen's preferred subjects of security, Islam and immigration.

"We will not expect the French people to get used to living with terrorism," she said, promising a massive increase in spending on law and order.

Speaking in the city where she once compared the sight of Muslims praying in the street to the Nazi occupation, Le Pen said: "We do not want to live under the tyranny of fundamentalism."

She promised a "zero tolerance" approach to crime with the recruitment of 15,000 extra police, focusing attention on the troubled suburbs of French cities.

Foreigners who commit crimes will be drummed out of France, she said.

Turning to the EU, she said she wanted to "release France from the tyranny" of Brussels. If the bloc refused to accept large-scale reforms, she pledged to call a referendum on membership within six months of taking office.

In the crowd, 21-year-old student Gregoire Laloux was delighted.

"I am attracted by what she says about patriotism, her definition of French identity and culture and her wish to put France back among the big international players," he said.

Michel Ducreux, 54, a farmer, also liked Le Pen's nationalist stance "and her policies for creating jobs for those who have the least".

But there were empty seats in the hall, in contrast to the packed venue in the same city on Saturday where 39-year-old Macron addressed 8,000 supporters with thousands more watching on a giant screen outside.

The FN's influential deputy leader Florian Philippot insisted that the momentum was with Le Pen and not the fast-rising Macron.

"People are waking up. They see Brexit, they see Trump and they're saying to themselves: 'It's worth going to vote'," he said before her speech.

One of Le Pen's advisors conceded however on Saturday that "on paper", Macron currently had the best chance of winning a head-to-head duel.

A former economy minister under unpopular Socialist President Francois Hollande, Macron is also running as a candidate outside the political establishment and has founded his own movement, En Marche (On The Move).

Macron said Le Pen "did not speak in the name of the people" and he took aim at nepotism in the FN, which was founded by her father, anti-Semitic former paratrooper Jean-Marie Le Pen.

France's far-right party leader Marine Le Pen on Sunday told thousands of flag-waving supporters chanting "This is our country!" that she alone could protect them against Islamic fundamentalism and globalization if elected president in May.

Buoyed by the election of President Donald Trump in the United States and by Britons' vote to leave the European Union, Le Pen's anti-immigration, anti-EU National Front (FN) hopes for similar populist momentum in France.

With hitherto favorite Francois Fillon, a conservative, embroiled in scandal over his wife's job, and rising centrist star Emmanuel Macron as yet untested, Le Pen's FN says it can thwart polls that see her losing in a second round run-off.

"What is at stake in this election ... is whether France can still be a free nation," Le Pen told supporters at her campaign launch rally. "The divide is not between the left and right any more but between patriots and globalists."

In 144 "commitments" published on Saturday, Le Pen says she would drastically curb migration, expel all illegal migrants and restrict certain rights now available to all residents, including free education, to French citizens.

An FN government would also take France out of the euro zone, hold a referendum on EU membership, and slap taxes on imports and on the job contracts of foreigners.

"Past leaders chose deregulated globalization. They said it would be happy, it turned out to be atrocious," Le Pen said. "Financial globalization and Islamist globalization are helping each other out ... Those two ideologies want to bring France to its knees."

While Le Pen has sought to make the FN more palatable to mainstream voters since she took over from her father Jean-Marie Le Pen in 2011, her speech on Sunday made clear that its anti-migration, anti-EU policy remained at the core of her agenda.

Le Pen received some of the loudest applause during her speech, with standing ovations to the sound of "France! France!" and "On est chez nous!" ("This is our country") when she pledged to expel all foreigners condemned for a crime or misdemeanor, and when she said migrants without identity papers could never be legally allowed to stay in France or get free healthcare.

On the other side of town, far-left firebrand Jean-Luc Melenchon held a rally, as did Macron, as candidates keep a close watch of each other's moves as the very unpredictable French election heats up.

Le Pen, Melenchon and Macron are all trying to attract voters disillusioned with mainstream parties.

There are some similarities between Melenchon's platform and Le Pen's, both sceptical of the EU and globalization, but with very different answers as the former Socialist staunchly criticises Le Pen's views on migration.

"What we don't want are some combinations and arrangements ... I will be intransigent," said Melenchon, who is fighting with Socialist candidate Benoit Hamon for the left-wing vote.

Meanwhile, heavyweight centrist Francois Bayrou joined calls on Sunday for Fillon to withdraw from the race, as his own conservative camp mounted pressure over a deepening financial scandal around his family.

(Additional reporting by Simon Carraud in Lyon and Maya Nikolaeva in Paris; Editing by Louise Ireland)