On May 15 [2015], Russian Prime Minister Dmitry Medvedev issued a resolution closing the Northern Distribution Network (NDN), a network of rail and road links across Russia and the post-Soviet space that had provided logistical transit to Afghanistan for International Security Assistance Force (ISAF) military equipment and weapons since 2008 (Moskovsky Komsomolets, May 19).

Given the drawdown of ISAF’s presence in Afghanistan, the closure is less of a logistical problem than it once was. The forces supporting ISAF’s successor—Operation Resolute Support, numbering roughly 12,500 troops from 28 North Atlantic Treaty Organization (NATO) allies and 14 partner countries building up the sustainability of the Afghan National Security Force (ANSF)—have reverted to southern rail routes bypassing Russia, truck convoys through Pakistan and aerial flights for logistical support.

The 3,212-mile-long NDN, which began operating in February 2009, consisted of a series of three railway lines, operating in conjunction with Pakistan Ground Lines of Communication (PAKGLOC) truck routes, along with aerial resupply. The NDN was developed to deal with the pressing need to sustain the movement of equipment and supplies during Operation Enduring Freedom. Prior to the NDN’s establishment, the only means of resupply to US and coalition forces in Afghanistan was through Pakistan.

The two NDN “Northern Line of Communication” (NLOC) routes ran through Russia to Afghanistan via Latvia, Kazakhstan and Uzbekistan, along with a subsidiary corridor transiting Russia, Kazakhstan, Tajikistan and Kyrgyzstan.
A southern NDN “Central Line of Communication” (CLOC) bypasses Russia completely, as it runs through Uzbekistan and Kazakhstan, crossing the Caspian via rail ferries to Azerbaijan and Georgia. CLOC is still in use, as it is unaffected by Medvedev’s decree.

From its inception, the NDN proved a useful addition to the truck routes through Pakistan, which were frequently either attacked or shuttered by the Pakistani government over policy disputes with Washington.

****
Maps of the southern and northern networks: 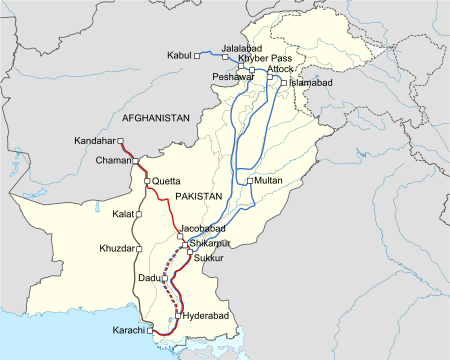 Established in 2008, the Northern Distribution Network is a key strategic alternative to the congested Pakistan Ground Line of Communication. USTRANSCOM is constantly seeking ways to decrease cost and delivery time, and obtain two-way cargo flow on as many routes as possible in support of operations in Afghanistan. The lack of a deepwater port in Afghanistan put ISAF at the mercy of neighboring countries to transport supplies. This geopolitical situation jeopardizes continuity in the distribution of cargo when countries decide to halt supply convoys or close services to ISAF contractors. The limitations of the Pakistan ground line of communication (PAKGLOC) and the scale of the improvised response with the “northern distribution network” complete the story of why distribution in Afghanistan is so difficult.
In mid-2008 the vulnerability of the PAKGLOC and a forecasted increase of supplies necessary to support surging troop levels in 2009 led planners to develop the northern distribution network as an alternate distribution pipeline into Afghanistan. Because the proposed shipments for non-military goods to ISAF in Afghanistan were being sent via commercial means, and in accordance with the 04 April 2008 letter from Russia to NATO, shipping supplies to ISAF (not Operation Enduring Freedom) via the NDN began in 2009. As long as all the commercial requirements are met, the NDN shipments would be treated as would any commercial shipment.
Due largely to the cost of shipping goods via air to Afghanistan, Germany approached Russia to make use of the pre-existing land transit agreement. According to the November 2008 agreement, the Germans would be able to ship any military goods across Russia to Afghanistan to support ISAF, including tanks and other heavy weapons. The Government of Russia could give its permission for such shipments to take place for up to one year. Germany must, however, declare what goods would be sent with each shipment. Germany also had agreements with Kazakhstan and Uzbekistan covering the land transit of goods to support ISAF, although Germany has not yet concluded an agreement to ship weapons and ammunition through Uzbekistan. Other NATO countries may include their goods in German transit shipments to Afghanistan as well. Both countries wanted to help stabilize Afghanistan and so it was natural that they cooperate in this venture.
After almost two years of negotiation and development, in March 2010, the commander of U.S. Transportation Command reported to Congress that while the PAKGLOC remained the primary route (50 percent), 30 percent of supplies transported into theater were traveling the northern distribution network, with the remaining 20 percent arriving by air.
The Northern Distribution Network, with U.S. Transportation Command in the lead, won the Supply Chain Council's 2010 Award for Supply Chain Operational Excellence in the Defense Sector. In announcing the award, the Supply Chain Council noted the NDN project "identified and established new distribution routes that connect Baltic and Caspian ports with Afghanistan via Russia, Central Asia and the Caucasus. The flexible supply line, which relies entirely on commercial shippers, now serves as an alternative to the vulnerable ground route that follows the Karachi-Peshawar road through Pakistan that had been used exclusively since 2001."
The NDN is a joint initiative of multiple agencies within the Department of Defense, and in addition to USTRANSCOM, includes U.S. Central Command, U.S. European Command, U.S. Department of State, and the Defense Logistics Agency.
The Northern Distribution Network (NDN) is a bi-directional system air, land and sea supply routes that support the war in Afghanistan from the north. When U.S. Transportation Command wanted to replace lines of communication that involved sealift to Pakistan and over-the-road transport into Afghanistan, it turned to U.S. Army Europe (USAREUR) and U.S. European Command for expertise in getting diplomatic approval and establishing a Baltic route traversing Latvia, Russia, Kazakhstan and Uzbekistan (or Kyrgyzstan and Tajikistan) and a Caucasus route across Georgia, Azerbaijan, Kazakhstan and Uzbekistan.
USAREUR completed missions on its own years earlier that proved the NDN was viable. This success and established relationships with these countries were crucial to securing diplomatic clearances and creating the NDN. USAREUR members installed radio frequency identification readers at the ports in Riga, Tallinn (Estonia) and the Republic of Georgia, reducing manual tracking, improving visibility of cargo.
USAREUR logisticians also advocated for direct shipments from the Defense Logistics Agency depot in Germersheim, Germany, that can potentially cut shipping time by 10-35 days and container costs by nearly two-thirds. As a result each week approximately 20 trucks traverse the Czech Republic, Slovakia, Hungary, Romania, the Black Sea, Georgia, Azerbaijan, Kazakhstan, Kyrgyzstan and Tajikistan to Afghanistan.
USAREUR's Logistics Automation Branch continues to engage partner nations to improve visibility of cargo at critical border crossings and ports.USAREUR also continues to pursue direct rail shipments from the EUCOM AOR that could result in rail traffic departing Germany and transiting Poland, Ukraine, Russia, Kazakhstan and then continue by rail through Uzbekistan or by truck via Kazakhstan, Kyrgyzstan and Tajikistan. In addition, USAREUR established an operations hub at Romania's Mikhail Kogalniceanu Air Base to support its deployments, which can also sustain retrograde movement of cargo from Afghanistan to Europe or the United States.
With decades of experience working with partner nations strategically located to support U.S. forces, the lead in traffic management, critical roles in obtaining diplomatic clearances and maintaining visibility of DOD material in transit, and other responsibilities, USAREUR is vital to keeping supplies flowing to forces in Operation Enduring Freedom.
[END]